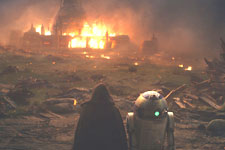 T J Reddy / fullhyd.com
EDITOR RATING
8.0
Performances
Script
Music/Soundtrack
Visuals
9.0
9.0
7.0
10.0
Suggestions
Can watch again
Yes
Good for kids
Yes
Good for dates
Yes
Wait to rent it
No
After the understandably ultra-brand-safe Episode VII of the Skywalker-Solo saga, director Rian Johnson, the mind behind Brick, Looper and one of the best episodes, if not the very best episode, of Breaking Bad (The Fly), took over the reins of Episode VIII. Sufficed to say, most of the excitement for the film was primarily because of the director's pedigree and the thematic ambition he was primed to bring to a franchise that is historically light in depth and complexity.

In the newest entry to the Star Wars saga, the opening crawl gives you all the bones of the plot. The leftovers of the rebel forces are on retreat as they are being hunted by the First Order's Supreme Leader Snoke (Andy Serkis), General Hux (Domhnall Gleeson), Kylo Ren (Adam Driver) and their near-endless Nazi-styled armed forces. The Resistance led by Leia Organa (Carrie Fisher) is on a mad dash to evacuate their base. Leia's defence forces steered by relatively boneheaded yet brave Commander Poe Dameron (Oscar Issac) attempt to shield the evacuation from the aforementioned forces of evil.

Meanwhile, at the hut of Skywalker, (in true middle episode fashion) Rey (Daisy Ridley) attempts to learn the ways of The Force from reluctant Jedi Master and former Force-user Luke Skywalker (Mark Hamill).

This is the plot. But as you'd suspect, under this set-up are a bucket-load of merchandisable characters. And under the porgs, BB-8s and surprisingly regular-sized Supreme Leaders is a deeply complex and character-driven entry into the Star Wars ecosystem. This is a film/story dealing with themes of identity, duality, making peace with one's past, living up to one's heroes and, most of all, balance under the pretence of being a simple space opera. Almost every character's goals, dreams, fears, desires, conflicts and hopes are what set this entry apart from almost every other one in this franchise. They need to be experienced rather than read. Rian Johnson has just entered the building, ladies and gentlemen.

As the old saying goes, a sequel that betters the original is called The Empire Strikes Back of said original. And without a shadow of a doubt, The Last Jedi is The Empire Strikes Back of The Force Awakens. This is because writer/director Johnson wants the fresh versions of Luke (Rey), Leia (Finn), Han (Poe) and Vader (Kylo Ren) to be deeper than their older iterations. For what seems like the first time, Luke Skywalker feels like more than just a doe-eyed teen who became a hero by chance. While the relationship he shares with his two protégés mirrors that of Master Shifu in Kung Fu Panda, this story elevates itself by adding layers of multi-faceted conflict.

By making the primary goal of the rebels a fight for survival more than a fight for supremacy, the film allows itself to veer away from the pre-established formula of shoot first and ask questions later. This game of chess being played between the powers that be allows for an immense amount of time to be spent on introducing and building up the characters (either good or bad) which gives the audience enough reason to care about them.

That being said, a film chock full of primary and secondary characters has only so much story it can assign to each of them. While new characters Rose (Keely Marie Tran), Vice Admiral Holdo (Laura Dern) and DJ (Benicio Del Toro) get to dictate a chunk of the plot progression and character growth, old war-horse Leia and Supreme Leader Snoke are left behind to a certain degree.

While the movie needs to be commended for not "playing the hits" and choosing to add new faces to familiar territory, the time it takes to establish them by giving them things to do to justify their presence takes a toll on its pace. Even though the payoff is mesmerizing to watch, the setup might be a tad too tedious - an issue similar to the one that plagued Baahubali 2.

But mirroring the much-awaited Indian epic in more ways than one, the one set of people who are hell-bent on not letting the audience feel the tedium are the actors. By giving the massive ensemble a concoction of some tried and true themes, self-deprecating humour and wholly original and deeply personal conflicts, the movie brings the best out of every single one of the pretty men, women, droids and aliens adorning its frames.

A special shout-out goes to Adam Driver and his utterly compelling portrayal of Kylo Ren - a character so well-written, executed and performed that the vaunted trio of Darth Vader, Anakin Skywalker and Emperor Palpatine come off as one-dimensional in his mere presence.

Three-dimensional characters need three-dimensional visuals. And The Last Jedi can take its place next to Dunkirk and Blade Runner 2049 as one of the most visually stunning films of 2017. If you find yourself wholly absorbed by the story, the written word is sharing its success with the lighting, camerawork, editing, colour palette and multiple excellently choreographed action sequences which are hard at work boosting the narrative while making the film feel truly cinematic.

And if only the legendary John Williams could see past his horn section, we could also have had a score our ears could marvel at instead of just being satisfied with.

In a beaming moment of self-awareness that cuts into the Star Wars mythos like a lightsaber, Kylo Ren speaks of letting the past die as it is the only way one can become what they were meant to be. This is a thesis statement for the film itself. Long gone are the days of moustache-twirling villains, merchandise material that takes centrestage and predictable story-telling that aims at keeping the audience safe and satisfied.

In this entry at least, the spectacle is fuelled by true narrative ambition. Because these 150 minutes aim to give you a Star Wars experience you never knew you wanted. Once you've experienced what a great story can do in this universe, settling for anything less is not an option. It's all on you to send the new trilogy off in style Abrams.
Share. Save. Connect.
Tweet
STAR WARS: THE LAST... SNAPSHOT
STAR WARS: THE LAST JEDI (HINDI) SNAPSHOT 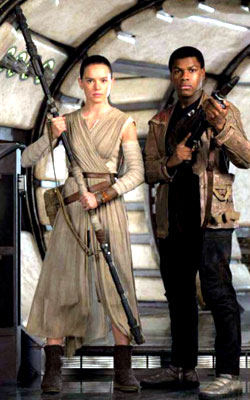 ADVERTISEMENT
This page was tagged for
star wars episode 8 full movie in hindi
star wars the last jedi full movie in hindi
star war tha rise of Skywalker hindi movie
Star Wars Episode 8 Hindi
Star wars tha last Jedi full movie in hindi
Follow @fullhyderabad
Follow fullhyd.com on
About Hyderabad
The Hyderabad Community
Improve fullhyd.com
More
Our Other Local Guides
Our other sites
© Copyright 1999-2009 LRR Technologies (Hyderabad), Pvt Ltd. All rights reserved. fullhyd, fullhyderabad, Welcome To The Neighbourhood are trademarks of LRR Technologies (Hyderabad) Pvt Ltd. The textual, graphic, audio and audiovisual material in this site is protected by copyright law. You may not copy, distribute, or use this material except as necessary for your personal, non-commercial use. Any trademarks are the properties of their respective owners. More on Hyderabad, India. Jobs in Hyderabad.