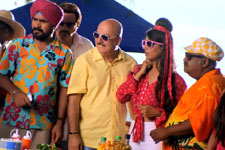 Nupur Barua / fullhyd.com
EDITOR RATING
3.0
Performances
Script
Music/Soundtrack
Visuals
6.0
3.0
4.0
5.0
Suggestions
Can watch again
No
Good for kids
No
Good for dates
No
Wait for OTT
No
Satish Kaushik has two movies releasing this weekend - one in which he acts, and one which he directs. Unfortunately for him, his calibre as an actor is far higher than his intellect as a director, as it will become obvious to you should you choose to watch Gang Of Ghosts, an official remake of the Bengali film Bhooter Bhabishyat. That it is a comedy is a given, but if he had to remake a regional hit, he should have played it safe and picked on an action film instead, where one would not question either the casting or the logic.

Where does he go wrong? Everywhere.

In the story, an ad film director (Parambrata Chatterjee) is looking for a location for a shoot when he comes across the dilapidated, abandoned Royal Mansion. The place was popular with film crews at one point, but ever since an actress saw a ghost in the mirror, it has been shut down.

The intrigued director now wants to shoot here, and he sends for his own crew. While he waits, he meets with an aspiring film writer (Sharman Joshi), who wants to tell (and probably sell) him a story for a movie. Having nothing to do, the director indulges him.

The writer then explains that the premise is the razing of heritage and old structures to make way for malls and commercial properties. Has the director ever wondered where the ghosts go when such events occur?

The writer then proceeds with the bizarre tale, in which the ghost owner of an old property agrees to let homeless spirits share his space, provided they pass the interview with him. And thus a party, or gang, of ghosts begin to reside.

The rest of the story is about how they get along, or don't, and what they do to make their existence worthwhile. The sceptical director slowly begins to change his perception of life in general and ghosts in particular, but he is not prepared for the twist in the tale.

The story pretty much sticks to the original, but where the Bengali film says it all in its title (roughly translated to "Future Of Ghosts"), cleverly playing on the pun "Bhoot" (which means both ghost and past), the Hindi version just loses the plot. Firstly, the humour is slapstick in this one, as opposed to the situational and more sophisticated wit of the original. With every character trying so hard to make you laugh, you get a headache. It has its moments, but the dialogues are irreverent and irrelevant, making the entire movie quite tiresome.

The movie is set in Mumbai, which has a different charm from Kolkata. One wonders why Satish Kaushik insisted on peppering it with a different flavour. The Bengali one worked because it intertwined history and politics with the history of the ghosts. In the Hindi one, the characters are random ghosts, with no fixed dimension. Of course there is a message - about greedy builders and the loss of the concept of peace and harmony - but unlike the original, this is subdued in the screenplay, and is brought up out of the blue, as if the makers suddenly realised what the purpose of the script was. It is evident that Satish Kaushik tries to make the movie a comment on our society, but the execution of the written word is so amateur that you almost walk out of the theatre.

Parambrata Chatterjee plays the exact role that he had in the Bengali film. At times, he looks bored, and at other times, he looks flummoxed, as if he cannot believe where the story is headed.

Anupam Kher is rather irritating, but since that is what his character is all about, he does a decent job. Sharman Joshi does not have a well-written role, unlike in the Bengali film.

Jackie Shroff and Chunkey Pandey are jaded and stereotypical, and annoying. Asrani is funny.

Yashpal Sharma, Saurabh Shukla, Rajpal Yadav (terrific comic timing) and Vijay Verma, as well as Brandon J Hill, deserved more screen time, which the director could have given if he had cut down on the roles of Mahie Gill and Meera Chopra, both extremely exasperating, especially with their dialogue deliveries.

The production design is rather gaudy, and begs to be compared with that of the original. The lighting and the cinematography do not help matters much, and with weird VFX, only make it worse. The costumes are straight out of a rental, and not stylised or personalised, making the actors look more like clowns than ghosts. The music is below average, and the songs are badly timed. Or maybe that is the fault of the editor - the transitions are rather shaky, between sequences, and not in a good way.

With all the farting and the bad jokes, Gang Of Ghosts is a nightmare, which defeats the purpose of a horror comedy. This has to be one of most avoidable remakes in recent times, and we recommend skipping it. In fact, skip the trailers on YouTube as well, while you are at it.
Share. Save. Connect.
Tweet
GANG OF GHOSTS SNAPSHOT 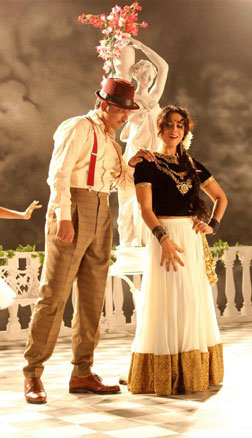 ADVERTISEMENT
This page was tagged for
Gang Of Ghosts hindi movie
Gang Of Ghosts reviews
release date
Sharman Joshi, Mahie Gill
theatres list
Follow @fullhyderabad
Follow fullhyd.com on
About Hyderabad
The Hyderabad Community
Improve fullhyd.com
More
Our Other Local Guides
Our other sites
© Copyright 1999-2009 LRR Technologies (Hyderabad), Pvt Ltd. All rights reserved. fullhyd, fullhyderabad, Welcome To The Neighbourhood are trademarks of LRR Technologies (Hyderabad) Pvt Ltd. The textual, graphic, audio and audiovisual material in this site is protected by copyright law. You may not copy, distribute, or use this material except as necessary for your personal, non-commercial use. Any trademarks are the properties of their respective owners. More on Hyderabad, India. Jobs in Hyderabad.