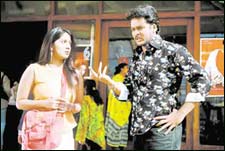 EDITOR RATING
5.0
Performances
Script
Music/Soundtrack
Visuals
NA
NA
NA
NA
Suggestions
Can watch again
NA
Good for kids
NA
Good for dates
NA
Wait for OTT
NA
It’s easy to dismiss Seetha Ramudu as just another clichéd mass film. So we’ll do just that – we’ll dismiss it as just another clichéd mass film. However, clichéd need not always mean bad. For, the Tollywood ladder works like this – when you originally come in, it’s usually the completely talent-less directors that cast you. That is since they cannot attract even halfway established actors with their scripts, which are way below even clichéd.

If you manage to stand out in such films for a while, you get the mid-rung directors with mid-size budgets, who are talented enough just to make clichéd mass films that work for 30-40 days. If you manage to hold on for a while in that slot, some day some big guy notices you. This whole process takes several years if you have no contacts, as Ravi Teja will tell you.

As you can see, therefore, it’s easy to dismiss Seetha Ramudu as just another clichéd mass film. But it takes an actor a while to get to the level where he can bag at least clichéd mass films, and it is a significant stage in a process of evolution. And there are people who watch these.

That Sivaji is talented, there can be no doubt about – Koncham Touchlo Unte Cheputhaanu bears testimony to his acting talent, comic flair and energy levels. Seetha Ramudu should therefore be seen in the proper perspective – it may just about bring home the bacon for its makers, but as a film, it is not an end in itself. It has the potential to establish Sivaji as a mass hero, moving away from comic and family-oriented roles. Just for acting talent in an industry dominated by star-relatives, he deserves it.

Seetha Ramudu (Sivaji) is a good-hearted unemployed youngster who, like any mass hero, can beat up multiple goons and more, single-handed. Unlike other mass heroes, though, he has a paunch, as you’ll observe if you look closely (it must be bigger, since any man worth his flesh sucks in his belly to the extent possible).

Since likes attract, he falls in love with a plump Anjali (Ankita). It’s hard not to notice that Ankita has put on weight – most of it is on display, and is the USP of this film. You see Ankita in low-cut tops, you see her in skimpy shorts, you see her in swim suits, and as a result, you see only her, ignoring everything else in the film. She is perhaps the single reason that the film does not carry a U rating.

Ramulu (Rahul Dev) is a local don, and when his son falls in love with Anjali too, he decides to terminate Seetha Ramudu to get his son marry his love. However Seetha is the hero of the film, and has a few tricks up his sleeve, not to mention muscles of steel inside them. The film then becomes a battle of wits with ideas borrowed from other films, and a battle of arms, with credulity borrowed from you.

Sivaji is good, but has too much of a naughty gleam in his eye to be taken seriously as an action hero. Ankita knows her career is going down the tube, and has no qualms about exposing her way back – she looks almost vulgar. Even looks-wise, she is a far cry from the Manasu Maata Vinadu girl. Rahul Dev and all others are clichéd.

ADVERTISEMENT
This page was tagged for
movie telugu golmaal 3 language:en
Sitha ramudu sorty
setha ramudu lankalalo
Seetha Ramudu telugu movie
Seetha Ramudu reviews
Follow @fullhyderabad
Follow fullhyd.com on
About Hyderabad
The Hyderabad Community
Improve fullhyd.com
More
Our Other Local Guides
Our other sites
© Copyright 1999-2009 LRR Technologies (Hyderabad), Pvt Ltd. All rights reserved. fullhyd, fullhyderabad, Welcome To The Neighbourhood are trademarks of LRR Technologies (Hyderabad) Pvt Ltd. The textual, graphic, audio and audiovisual material in this site is protected by copyright law. You may not copy, distribute, or use this material except as necessary for your personal, non-commercial use. Any trademarks are the properties of their respective owners. More on Hyderabad, India. Jobs in Hyderabad.