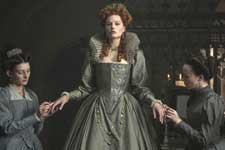 Punarvasu Pendse / fullhyd.com
EDITOR RATING
5.5
Performances
Script
Music/Soundtrack
Visuals
7.0
6.0
6.0
7.0
Suggestions
Can watch again
No
Good for kids
No
Good for dates
Yes
Wait for OTT
Yes
Compelling drama often does not have time for pedantry, so you many times expect historical veracity to be cast aside for the sake of entertainment. Mary Queen Of Scots however delivers on neither: it is neither historically very accurate (one discrepancy that comes to mind immediately is that Mary and Elizabeth, while cousins, did not have the meeting that is such a striking part of the movie's script) nor a particularly gripping dramatic endeavour.

The lack of consistency in the narrative is also a bit disconcerting, and makes some parts of the 125-minute movie feel especially jarring. Thus, the movie is a drama that pits against each other two powerful women in a world filled with scheming men both claiming to abhor the traditional female roles of their time yet finally talking about fertility and beauty in the arguably climactic encounter they "had".

Josie Rourke's debut as a film director, Mary Queen of Scots is a tale of contrasting pairs - a young, vivacious Mary Stuart (Saoirse Ronan) against the middle-aged, pox-scarred and subdued Elizabeth Tudor (Margot Robbie); a worldly teen widow against a rugged country with its long standing traditions; Mary's bold and oftentimes temperamental wit contrasting with the political and scheming malefolk in her courtiers; and even Mary's costumes that infuse a splash of colour into an otherwise dark and dreary atmosphere that the film projects - specifically her last stand in which she lights up the screen in a red gown after shedding the same sombre black garb that everyone else wears.

Set in Scotland and England amidst the divide between the faiths of the two queens (Catholic Mary vs Protestant Elizabeth), Mary Queen Of Scots traces the journey of a young widowed Mary who returns from France and takes over the throne from her brother, the regent. Directly challenging Elizabeth's claim over England (due to Elizabeth lacking an heir), Mary audaciously writes to her cousin asking to be named her heir. But her letters also point to affection and respect between the cousins, which is where the movie's main theme comes into sharp focus. The film paints the two women as sisters, with admiration for each other - and that causes its end to feel like a betrayal of Mary by Elizabeth. The movie also makes Elizabeth seem indecisive, fatigued by her duties as queen, and partially jealous of Mary - showcasing her as some sort of a foil to the attractive, younger Queen of Scots.

Rourke's switch from theatre to film seems effortless, with the exception of the moment where the two queens meet in a small cottage; what would have worked splendidly in theatre makes you wonder what it is with all the curtains. Beau Willimon, who was the showrunner for the first four seasons of House Of Cards, weaves in political drama adeptly into the the script, amply displaying that the two queens are often only pawns in the machinations of the powerful men around them.

Saoirse Ronan is grand as Mary, Queen of Scots, cementing her spot as one of the most brilliant young actresses in Hollywood, while Margot Robbie seems somewhat stunted by the haphazard way Elizabeth is written. Jack Lowden as Mary's husband and Joe Alwyn as Elizabeth's beloved act fairly well, but the story paints them as unimportant side characters. I was genuinely surprised that the disruptive Protestant preacher John Knox, who seeks to discredit Mary's authority by calling her a harlot, was played by an unrecognizable David Tennant - he is convincing in his small role, of course. As is Guy Pearce, who plays Elizabeth's trusted advisor William Cecil.

To its credit, Mary Queen of Scots looks interesting for most of its runtime - it does not drag and almost always feels like it is flowing, and Saoirse Ronan takes it to a higher level with another stellar performance. Despite the positives, though, the movie does not seem to really take off at any point. It is sadly a case where the sum of the parts is lesser than the whole.
Share. Save. Connect.
Tweet
MARY QUEEN OF SCOTS SNAPSHOT 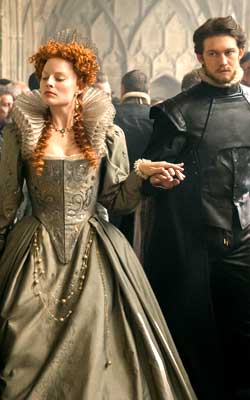 ADVERTISEMENT
This page was tagged for
Mary Queen Of Scots english movie
Mary Queen Of Scots reviews
release date
Saoirse Ronan, Margot Robbie
theatres list
Follow @fullhyderabad
Follow fullhyd.com on
About Hyderabad
The Hyderabad Community
Improve fullhyd.com
More
Our Other Local Guides
Our other sites
© Copyright 1999-2009 LRR Technologies (Hyderabad), Pvt Ltd. All rights reserved. fullhyd, fullhyderabad, Welcome To The Neighbourhood are trademarks of LRR Technologies (Hyderabad) Pvt Ltd. The textual, graphic, audio and audiovisual material in this site is protected by copyright law. You may not copy, distribute, or use this material except as necessary for your personal, non-commercial use. Any trademarks are the properties of their respective owners. More on Hyderabad, India. Jobs in Hyderabad.