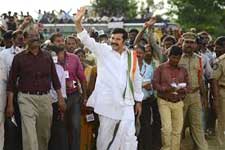 T J Reddy / fullhyd.com
EDITOR RATING
3.0
Performances
Script
Music/Soundtrack
Visuals
5.0
2.0
3.0
4.0
Suggestions
Can watch again
No
Good for kids
No
Good for dates
No
Wait for OTT
Yes
Why do people opt to test themselves? Why do everyday men and women run marathons or participate in Tough Mudder or Iron Man competitions around the world? The general public is never in awe at the winner of a marathon, but is always wowed by their friend (a common man) finishing said marathon. The reasoning for that rush of emotion is simple. We know the mammoth journey that was undertaken before the runner steps on the starting line, we have sat through hours of training, doubt, blood, sweat and tears, and most of all we empathise because the runner is one of our own. Beyond the blisters, chafed skin and sore muscles, the emotional expedition is what stands the test of odds and time.

During the over two-hour runtime of Yatra, we walk with former Chief Minister Y S Rajashekar Reddy (Mammootty) as he traverses the length and breadth of his state in an attempt to better understand its citizens. His endeavour is opposed by the ruling party and his own party, but Reddy is seemingly a man of conviction. The aforementioned hindrances are no match for his resolve. He inspires the common man, he shows them what a leader looks like, he irons out the creases in his character, and on a personal note, during the journey, learns what it means to be a true leader to the masses.

Now imagine how great it would have been to see this story unfold on screen with a filmmaker who wanted to make a good film with no overt agenda or laughably misguided political mudslinging. Well, we can only dream for now.

A la Thackeray from a few weeks ago, Yatra chronicles the story of a man who is seemingly infallible. A man who is no less than any action movie star who graces the silver screen on a consistent basis. His tenacity is unbreakable, his journey is unstoppable, and the only thing he has to fear is fear itself. How does one make a conflict-free narrative interesting? Unless one is a French art-house director making the cinematic LSD trip Enter The Void, or Gus Van Sant making the mind-numbingly boring Gerry, the options narrow down to adding a metric ton of ancillary characters who endlessly suffer to make up for the main character's lack of conflict or loss.

We watch the cinematic interpretation of YSR go from place to place empathising with farmers, widows, senior citizens and so forth, but the empathy of audience is only for those downtrodden folks, and extends to the main character insofar as he himself is a spectator like the audience. The movie offers catharsis to this stream of suffering by means of a misguided political ad that makes up its epilogue. This veil-free attempt at coercing the public seems distasteful at best and manipulative at worst.

This multi-crore ad might have achieved its intended goal if it only had a narrative as compelling as its lead's performance. Mammootty brings his customary gravitas to an underwritten character and an undercooked script. His presence adds a sense of credibility that the film yearns for. His interplay with Rao Ramesh's KVP and his genuine display of anguish at the plight of others does more to humanise YSR than the script or the direction. The actors around him, however, are very recognisable character actors who have essayed out one-note roles before, and have little to offer to the movie other than making their attendance.

The film's music and visual presentation, too, scream of a student who makes it to class in time to respond to roll call and sleeps unperturbed through the next hour. The music sings praises of its lead character even though the events unfolding on screen rarely warrant such actions. The movie lacks visual flair, too - it doesn't have a distinct colour palette, and is rife with flat cinematography. The most rousing of speeches or selfless of acts is crushed under the cacophonous and misplaced music and the morose presentation.

With no insight into the man behind the politician, the film contradicts the age-old adage and refuses to allow the audience to walk in its lead character's shoes for a mile to know his struggles, doggedness and triumphs. We are left watching a marathon from the sidelines where the outcome leaves no real impact on anyone - excluding the cast and crew of the film, who may have to nurse their blisters alone.
Share. Save. Connect.
Tweet
YATRA SNAPSHOT 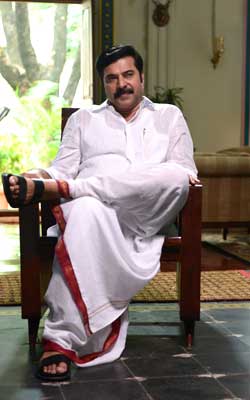 ADVERTISEMENT
This page was tagged for
yatra.talugu.movei
Yatra telugu movie
Yatra reviews
release date
Mammootty, Jagapathi Babu
Follow @fullhyderabad
Follow fullhyd.com on
About Hyderabad
The Hyderabad Community
Improve fullhyd.com
More
Our Other Local Guides
Our other sites
© Copyright 1999-2009 LRR Technologies (Hyderabad), Pvt Ltd. All rights reserved. fullhyd, fullhyderabad, Welcome To The Neighbourhood are trademarks of LRR Technologies (Hyderabad) Pvt Ltd. The textual, graphic, audio and audiovisual material in this site is protected by copyright law. You may not copy, distribute, or use this material except as necessary for your personal, non-commercial use. Any trademarks are the properties of their respective owners. More on Hyderabad, India. Jobs in Hyderabad.