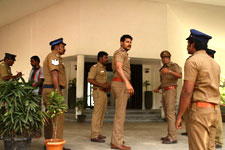 Daphne Rose / fullhyd.com
EDITOR RATING
6.5
Performances
Script
Music/Soundtrack
Visuals
6.0
7.0
6.0
5.0
Suggestions
Can watch again
Yes
Good for kids
Yes
Good for dates
Yes
Wait to rent it
Yes
A good thriller, like a certain Miss Christie would tell you, is one where the clues are placed right in front of the audience, but which still keeps them guessing until the very end. Taken in that context, Project Z is one that the Dame would've approved of.

Or at least the story part of it. Maybe.

But would Hitchcock? The thaumaturge of telling shocking, riveting, thrilling stories via the cinematic media? Definitely not.

Five minutes into the movie - and if you're paying attention - you have a fair idea of what path it is heading down, but that doesn't stop it from being a decent thrill-fest provided you don't mind the wait which, regrettably for you, pretty much extends into the entire pre-interval portion.

The movie which starts in 2037 takes you back in time to 2017 where a young cop, Kumar (played in a very slice-of-life manner by a dishy-looking Sundeep Kishan), is chasing a petty criminal when he happens to chance upon a murder just as the deed is being carried out. A chase, a (thankfully) realistic fight sequence and a near-death experience later, our man is now suffering from PTSD and requires the services of a psychiatrist (Lavanya Tripathi, who has come a long way from her previous outings but still needs to work on her expressions) to help him deal with the trauma. During the course of events that follow, he comes across murders (in the plural, yes) that are uncannily similar to the one that set the ball rolling in the first place, and what happens from here on forms the real plot.

However, that plot, unfortunately for the movie and for you, actually picks up just about a half-hour before the interval. The sub-plots of the cop and the psychiatrist, a childhood trauma that is hinted at very early on but is given perfunctory resolution, the PTSD etc take up a major part of the first half, and are what contribute to the movie's laggard pace without adding much value to the story itself.

But once you've made your difficult way over to the second half is when the real bang-for-your-buck begins. The screenplay gets tight, there are no deviations from the storyline, the atmosphere is tense and the audience is on tenterhooks to watch Kumar & co. save the day.

A huge part of the credit for making that happen goes to the music composer Ghibran who keeps the proceedings grim and your mind on high alert. The performances, too, really kick off in the second half. Special mention must be made here of Daniel Balaji, Jackie Shroff and Bagavati Perumal for their interpretations of their roles.

Taken overall, the strength of Project Z, a dubbed version of the Tamil "Maayavan", lies in its story and its narrative in the post-interval portion. Explaining sci-fi to a regular movie-going crowd is a task in itself, but the director breaks it down sufficiently enough to warrant attention. The background score is great and the performances are decent. But all these are the strengths of the original - the dubbing itself betrays laziness. The lip-sync is terribly out of place, and the stock shots (of which there are many) to indicate a transition between the scenes are vapid and stick out like sore thumbs.

Also, when was the last time you saw a coma patient in a dental hospital?

To condense things - watch the Tamil version for a good story and to see how Kishan fills out his cop uniform. But if Telugu is your deal, then you're better off waiting for this one to premiere on TV.
Share. Save. Connect.
Tweet
PROJECT Z SNAPSHOT 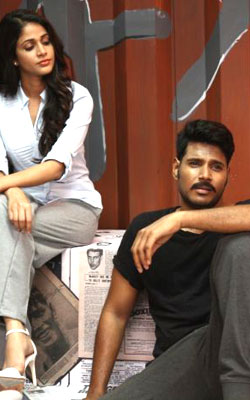 ADVERTISEMENT
This page was tagged for
project z telugu movie review
Project Z Telugu Movie review in Telugu
project z telugu full movie download
project z movie download telugu
project z movie download in telugu
Follow @fullhyderabad
Follow fullhyd.com on
About Hyderabad
The Hyderabad Community
Improve fullhyd.com
More
Our Other Local Guides
Our other sites
© Copyright 1999-2009 LRR Technologies (Hyderabad), Pvt Ltd. All rights reserved. fullhyd, fullhyderabad, Welcome To The Neighbourhood are trademarks of LRR Technologies (Hyderabad) Pvt Ltd. The textual, graphic, audio and audiovisual material in this site is protected by copyright law. You may not copy, distribute, or use this material except as necessary for your personal, non-commercial use. Any trademarks are the properties of their respective owners. More on Hyderabad, India. Jobs in Hyderabad.