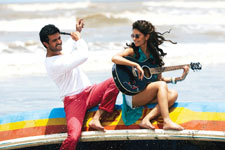 Nupur Barua / fullhyd.com
EDITOR RATING
3.0
Performances
Script
Music/Soundtrack
Visuals
4.0
3.0
5.0
5.0
Suggestions
Can watch again
No
Good for kids
No
Good for dates
No
Wait to rent it
No
After this weekend, two aspects of the Indian film industry are clear - (i) Hindi gangster films should not be made, not anymore, and (ii) Harman Baweja should stop trying and retire, much like his contemporary, Uday Chopra. If you do not believe us, or think we are being too cynical, please watch Dishkiyaoon.

A game of snakes and ladders between two men becomes a metaphor for their lives (or maybe that is what we are supposed to think). Lakwa (Sunny Deol) listens intently to what the younger Viki (Harman Baweja) has to say. Cut to flashback, and we have a rebellious Viki, whose father (Rajit Kapoor) has largely ignored him in favour of pursuit of wealth. The neglected Viki does not want to be his father's shadow, and in one heated exchange, leaves the house. You see, Viki, who can have anything he wants, obviously rejects his Gandhian father (strange, for a man who loves his money), because he has his own dreams of (hold your breath) becoming a gangster. Because what is more glamorous than a life of constant fleeing?

Now Viki comes in contact with Mota Tony (Prashant Narayanan), and learns the ways of a gangster. There is a lot that happens after that, but he also manages to fall in love with a performer (Ayesha Khanna), and he realises that he is living the dream - on the run, check; desirable moll without scruples, check; crazy mentor that he can plead allegiance to, check; really upset father, check; many enemies, check; one particular nemesis who is a gang leader (Sumit Nijhawan) and therefore above his league but Viki can scare him nevertheless, check; and, of course, one dumb, pointlessly complicated plan that reeks of amateur hooliganism but is passed off as intellectually brilliant, check.

With first-row-whistle-worthy dialogues and bland execution of a mindless script, Dishkiyaoon is so mind-numbing that you forget who you are after a point. The sane you could not have signed up for this, but unfortunately, you have, so treat this as a bad acid trip (considering the entire movie is an out-of-body experience anyway, this should not be too difficult). The climax, when it is thrown into your face, has a twist, but you do not realise it till later.

In fact, you are probably remembering those days when Love Story 2050 was running in theatres - good days, you think. Although revenge is the main emotion that runs through the movie, the lack of drama in the writing leads to a dull and insipid film.

The intended humour lies in Lakwa's dialogues, which may make you smile later, in retrospect. His grating Haryanvi accent distracts you from fully appreciating the finer moments in the film, which are few. Why does Viki want to make his life so meaningless and complicated, and why does he think it is cool to do so? The answer is blowing in the wind somewhere in 2050.

The inexplicable plot points and the paper-thin premise are enough reasons for this movie to be unpalatable, but the director goes one step ahead in his quest for doom by casting the wrong people for the shallow characters in his story.

Harman Baweja looks better (no longer a Hrithik Roshan clone) these days. He is fit and he tries really hard, but the poor boy has made some seriously bad decisions, especially if he wants to prove himself as an actor. One more movie like this and, comeback or re-comeback, he will have to face himself in the mirror and admit to his reflection that he is not cut out to be an actor. His action sequences are convincing, though, so we think there is hope yet.

In comparison, woody Sunny Deol is a rockstar, with his dhaai-kilo-ki-haath paralysed in this role. He has terrible lines, and one is not sure why he is in the movie, but then again, the movie needed at least one star who justifies the budget.

Prashant Narayanan is creepy. Period. Sumit Nijhawan and Aditya Pancholi do their bit, albeit not too well. Ayesha Khanna makes it to the list of the top ten most unimpressive debuts of all time. The breath of fresh air comes from Anand Tiwari, who plays the right hand of the rival don. Rajit Kapoor is wasted.

The production and costume design seem inspired by Ram Gopal Varma's Satya, and that is not a compliment, considering the latter was a cult movie ages ago. The cinematography and editing are nothing to look forward to, and both become quite tiresome and repetitive.

The music is surprisingly disappointing, considering Sneha Khanwalkar, of Gangs Of Wasseypur fame, is one of the music directors.

Dishkiyaoon is an outdated movie in a done-to-death genre. The writer and director, Sanamjit Talwar, may have been aiming for a film noir tone, but he missed the mark completely. This is not a movie you would want to watch, even if you are a Sunny Deol fan, unless you really feel sorry for Harman Baweja.
Share. Save. Connect.
Tweet
DISHKIYAOON SNAPSHOT 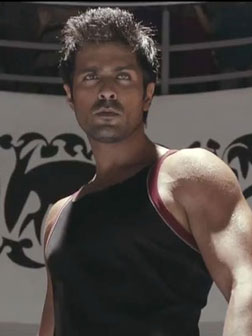 ADVERTISEMENT
This page was tagged for
disshkiyaoon movei summry in hindi
Dishkiyaoon hindi movie
Dishkiyaoon reviews
release date
Sunny Deol, Harman Baweja
Follow @fullhyderabad
Follow fullhyd.com on
About Hyderabad
The Hyderabad Community
Improve fullhyd.com
More
Our Other Local Guides
Our other sites
© Copyright 1999-2009 LRR Technologies (Hyderabad), Pvt Ltd. All rights reserved. fullhyd, fullhyderabad, Welcome To The Neighbourhood are trademarks of LRR Technologies (Hyderabad) Pvt Ltd. The textual, graphic, audio and audiovisual material in this site is protected by copyright law. You may not copy, distribute, or use this material except as necessary for your personal, non-commercial use. Any trademarks are the properties of their respective owners. More on Hyderabad, India. Jobs in Hyderabad.