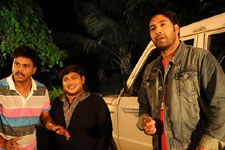 Kritika Deval / fullhyd.com
EDITOR RATING
2.0
Performances
Script
Music/Soundtrack
Visuals
4.0
1.0
2.0
2.0
Suggestions
Can watch again
No
Good for kids
No
Good for dates
No
Wait to rent it
No
The day of this film's release being Holi, this writer has been pondering the capacity in humanity to take something perfectly nice, and push it one step further into gross-out land. The answer to that question, we realized after watching Anandam Mallli Modalayyindi, is apparently: because they can.

AMM is apparently a sequel to Anandam, the penultimate '90s "youth-oriented" romance that nevertheless managed to age allright because it told a decent tale in which Kiran (Jai Akash) and Aishwarya (Rekha Vedavyas) managed to turn their love/hate dynamic into a relationship. And now, X years later, Jai Akash seems to have decided that we, the viewers, cannot possibly live without knowing what happens after the... erm... happily ever?

And so, you are introduced to the dysfunctional marriage of two dysfunctional people, Kiran and Aishwarya (now played by Jiya Khan). Because the only way Tollywood seems to be able to deal with marriage these days is by portraying how heroically husbands weather persecution by manically shrewish wives, there are two other similarly dysfunctional couples. The rules of engagement pertaining to persecuted husbands apparently state that the only way to fix the status quo is to gang up with other such martyrs to go off to frolic in Goa or Thailand or... no, that's just it. We cannot figure out if this is good or bad publicity for these places. On one hand, wives can probably preemptively ship men off to these places to get them monogamy-ready. But, on the other hand, how good are a bunch of mentally and morally deficient tourists who find it difficult to communicate for the image of these locations? If you want to know, this time, it's Goa.

And then, over roughly two minutes of drunkenness, these beleaguered souls decide that they have had enough of the women, and that the only way to show them up is by very rudely lying to their respective wives about having work out of town, and going off to Goa, where they will inevitably indulge in sexual hijinks that will result in their marriages getting magically fixed. And that, dear readers, is exactly what happens.

Setting aside the fact this entire trope is just so lazy that it is the creative equivalent of keeping a jar next to you so you don't have to get up to pee (which is a metaphor more intelligent than anything you will find in the entire movie, which in turn should give you an idea of how low the bar has been set), AMM also looks like Telugu soaps from the same era as when the prequel came out, as soap operas these days are putting more of an effort to make sure that your eyes don't fall into a state of coma due to how boring the images they have to process are.

The film begins with a scene in which a group of men threaten to attack a woman with acid while a whole bunch of men watch but do nothing. One of the film's plethora of indistinguishable "heroes" comes to the rescue, talks dirty to the assailants, takes time out so that he and the girl can fall in love, and then beats up the guys. The whole point of this cynical, opportunistic scene is to show us how good this guy is just for being a decent human being, and that the girl must obviously fall in love with him because he's beating up guys to rescue her. That's about it. There's something very creepy about how emotionally resilient our heroines seem to be, going from getting attacked by strange men to making googly eyes at strange men in a matter of seconds.

All of these observations are essentially immaterial in a film that makes a mockery of the idea of narrative, but are nevertheless mental contortions made necessary by our need to stay awake and focused in our quest to fulfill our obligations to our readers. We are the real martyrs here, as we slowly sacrifice bits of our minds and souls in service to all of you.

And in this spirit of martyrdom, we get into the details. The acting is incongruously competent in the face of the anachronistic mundaneness of each and every character. Let us reiterate. Each and every character here is so flat that they would be declared the Master Race in Edwin Abbott's Flatland. The editing and cinematography is indistinguishable from that of the public service ads preceding the film. The songs are as boring as the rest of the film.

In conclusion, we'd like to talk about a computer program being designed at Plymouth University to generate original music compositions. These are tunes that are the mere result of a set of variables entered into a computer, and contain more nuance than all of Anandam Malli Modalayyindi. 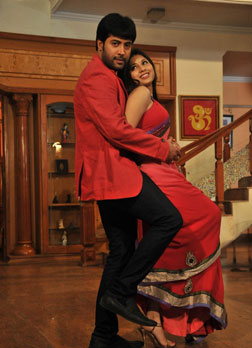 ADVERTISEMENT
This page was tagged for
Anandam Malli Modalaindi telugu movie
Anandam Malli Modalaindi reviews
release date
Akash, Angel Singh
theatres list
Follow @fullhyderabad
Follow fullhyd.com on
About Hyderabad
The Hyderabad Community
Improve fullhyd.com
More
Our Other Local Guides
Our other sites
© Copyright 1999-2009 LRR Technologies (Hyderabad), Pvt Ltd. All rights reserved. fullhyd, fullhyderabad, Welcome To The Neighbourhood are trademarks of LRR Technologies (Hyderabad) Pvt Ltd. The textual, graphic, audio and audiovisual material in this site is protected by copyright law. You may not copy, distribute, or use this material except as necessary for your personal, non-commercial use. Any trademarks are the properties of their respective owners. More on Hyderabad, India. Jobs in Hyderabad.