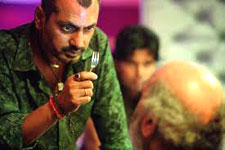 Vaishnavi Kulkarni / fullhyd.com
EDITOR RATING
6.0
Performances
Script
Music/Soundtrack
Visuals
7.0
5.0
6.0
6.0
Suggestions
Can watch again
No
Good for kids
No
Good for dates
No
Wait for OTT
Yes
Borrowing from Monsoon Shootout's theme, there are three possible ways in which this review could unfold:

Scenario A: I could tell you that this is a well-crafted, intriguing movie that is worth a watch, and you would take my word for it. You may eventually end up disagreeing with my opinion, however, and leave the cinema cursing me for my recommendation.

Scenario B: I could tell you that this is a confusing mess of a movie that goes nowhere, and preclude the necessity of you forming an opinion of your own at all.

Scenario C: I could throw you to the wolves by offering no concrete conclusion, and leave you to fend for yourselves in the cinematic wilderness with no light to guide you either towards or away from the ticket counter.

It is hard to say which of these options would be the most beneficial, but a film spanning a single, drawn-out moment laden with conjecture is almost certain to fare poorly anyway despite what the reviews say, and however hard its cast try to save it.

Monsoon Shootout is about a defining moment in the life of a Mumbai cop, fresh-faced and out on his first assignment - a moment in which time slows down and Adi (Vijay Varma) thinks his way through enough alternate futures to make the present seem irrelevant. Confronted by a fleeing Shiva (Nawazuddin Siddiqui) balanced precariously on a fence in the lashing rain, Adi is plagued by a singular question - to shoot or not to shoot. And he imagines three alternate scenarios unfolding.

The movie employs a unique style of narration and puts together a cast that delivers solid performances, but the lack of an actual plot leaves it hollow and rather anti-climatic in the end. The stories imagined by Adi's racing mind are mildly entertaining, but end up being rather too similar to each another to truly captivate their audience's attentions. The movie talks a lot about the end justifying the means, but fails to do so itself on the main front - there are far too many rambling means, all for little to no end.

The film does very well with some of its aspects, however, and they make it worth a one-time watch. The seedy, grimy, corrupt underbelly of the city is depicted in a harrowing way, as are the struggles of an officer trying to do good in a system whose moral compass has far too many grey zones. The parallels drawn between the possible lives of a father and his son touch a nerve, and the domino effect that the movie tries to show as a result of one man's on-the-spur-of-the-moment decision is pretty well-executed, albeit a bit exaggerated.

The cast does not disappoint. Vijay Varma plays the tortured and conflicted police officer with enough subtlety, without any excessive theatrics to dilute the effect. Nawazuddin Siddiqui plays the villain with his patented degree of intensity - he incites the audience to hate his character effortlessly, and keeps you on edge whenever he is on screen. Kabi as Khan and Thapa as Anu are both adequate in their supporting roles. Chatterjee as Rani (Shiva's wife) gives an especially good performance and makes you feel for her pain.

The film has a lot of dark, murky shots, with the sickly glow of fluorescent lamps draining people and places of colour - the cinematography resonates well with the damp, gloomy monsoon setting. The soundtrack is fairly run-of-the-mill, but Arijit Singh's 'Pal' lends a nice touch of calm in the middle of the storm.

Monsoon Shootout is a film you'll neither hate nor love - it holds your attention while you are watching it, but fails to be a movie that is worth remembering or reliving.
Share. Save. Connect.
Tweet
MONSOON SHOOTOUT SNAPSHOT 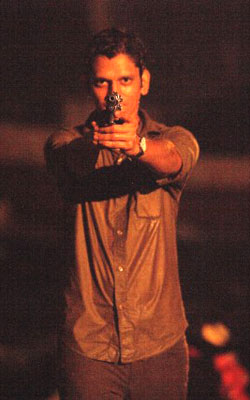 ADVERTISEMENT
This page was tagged for
Monsoon Shootout hindi movie
Monsoon Shootout reviews
release date
Vijay Varma, Nawazuddin Siddiqui
theatres list
Follow @fullhyderabad
Follow fullhyd.com on
About Hyderabad
The Hyderabad Community
Improve fullhyd.com
More
Our Other Local Guides
Our other sites
© Copyright 1999-2009 LRR Technologies (Hyderabad), Pvt Ltd. All rights reserved. fullhyd, fullhyderabad, Welcome To The Neighbourhood are trademarks of LRR Technologies (Hyderabad) Pvt Ltd. The textual, graphic, audio and audiovisual material in this site is protected by copyright law. You may not copy, distribute, or use this material except as necessary for your personal, non-commercial use. Any trademarks are the properties of their respective owners. More on Hyderabad, India. Jobs in Hyderabad.