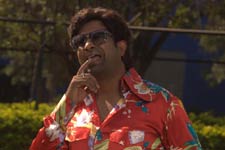 Deepa Garimella / fullhyd.com
EDITOR RATING
3.5
Performances
Script
Music/Soundtrack
Visuals
6.0
2.0
4.0
5.0
Suggestions
Can watch again
No
Good for kids
No
Good for dates
No
Wait to rent it
No
You never know what life has in store for you. One minute you're being rejected as son-in-law by your maternal uncle, the next minute you're marrying a hot girl out of your league, and the minute after that you're out on the streets because your newly-wedded wife refuses to consummate your marriage till you get a job.

On the flip side, if you're nice to your scooter, it'll be nice to you. It will even run on cow urine if you ever run out of petrol.

Athadu Aame O Scooter is a compilation of these and other such random, bizarre events and situations, that are a sum total of unfunny. It features Vennela Kishore as its lead, and clearly, the writers had no idea what to do with him.

Kishore plays Govindarajulu, a Bhimavaram slacker whose only redemptive quality seems to be that he can fix computers in spite of having merely a B.A. He has just lost the chance to marry his maradalu, because his uncle has no regard for him. Humiliated, he tells his uncle that he will race his daughter not just in the getting-married department, by marrying someone before she does, but also in the baby-making department.

He sets off to the city (apparently, the Bhimavaram-Hyderabad drive is not only best negotiated by two-wheelers, it is also highly conducive to 1970s-era scooters) to find a girl, and he does find one. Govindarajulu and Lucky (Priyanka Chabra) fall in love and get married, so Challenge No. 1 is fulfilled. But trouble starts when Lucky refuses to consummate the marriage till he finds a job. She does this because she wants to teach him to be more responsible.

Our man is busy being incredibly dumb in the job market. He unwittingly signs a questionable job contract with an escorts company, not even realizing who he's working for till he's sent to his first client.

The plot is wafer-thin, and devoid of real jokes. There is some crude humour at times in the second half, but the makers may be surprised to know that no one's really laughing.

Going by the poor quality of the film, you'd think Vennela Kishore is blissfully unaware of the magnitude of his leap from "side-actor"/comedian to protagonist. But thankfully, as the self-mocking jokes tell you, he seems to be clued in. He knows the risk he is running, and he knows he cannot afford to take himself seriously.

Indeed, a film that tries to showcase an unconventional-looking jokester as the lead actor ought to be solidly packed with humour and a strong plot. Trying to capitalize on his screen presence alone is unfair and a sure recipe for failure. We're sure that somewhere, Sunil is smirking away.

But to his credit, Kishore takes it in his stride and does what he can. His caricaturish retro haircut and dressing work for as long as they are on. Also, some of his scenes with the scooter are quite entertaining. He does light up the screen when he is around, although some of the vulgarity in the film makes him seem desperate.

The movie starts off seeming funny, but Kishore and sidekick Taagubothu Ramesh quickly run out of funniness in about 5 minutes. Except for a few moments, this is a silly, boring collection of misadventures that never elicit so much as a chuckle from you. One of the few truly humorous jokes is Kishore advising his milkman to get a new borewell.

Taagubothu Ramesh is plain tiresome. Dhanraj has a boring couple of appearances. Prithviraj seems sensible. Priyanka Chhabra makes no impact, and she doesn't even look the part of a traditional saree-clad Telugu wife.

The visuals are bright but not aesthetically superb. There are a couple of songs, but these are completely forgettable.

Athadu Aame O Scooter is not the best use of your time. Spend it on something more satisying, like befriending a plant.
Share. Save. Connect.
Tweet
ATHADU AAME O SCOOTER SNAPSHOT 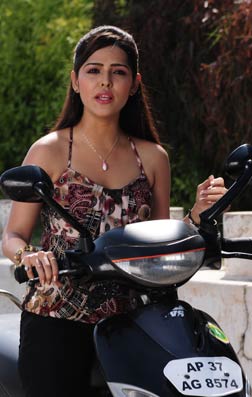 ADVERTISEMENT
This page was tagged for
Athadu Aame O Scooter telugu movie
Athadu Aame O Scooter reviews
release date
Vennela Kishore, Priyanka Chabra
theatres list
Follow @fullhyderabad
Follow fullhyd.com on
About Hyderabad
The Hyderabad Community
Improve fullhyd.com
More
Our Other Local Guides
Our other sites
© Copyright 1999-2009 LRR Technologies (Hyderabad), Pvt Ltd. All rights reserved. fullhyd, fullhyderabad, Welcome To The Neighbourhood are trademarks of LRR Technologies (Hyderabad) Pvt Ltd. The textual, graphic, audio and audiovisual material in this site is protected by copyright law. You may not copy, distribute, or use this material except as necessary for your personal, non-commercial use. Any trademarks are the properties of their respective owners. More on Hyderabad, India. Jobs in Hyderabad.