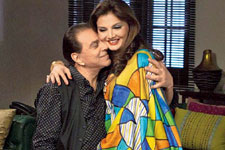 Nupur Barua / fullhyd.com
EDITOR RATING
4.0
Performances
Script
Music/Soundtrack
Visuals
5.0
4.0
5.0
6.0
Suggestions
Can watch again
No
Good for kids
No
Good for dates
Yes
Wait to rent it
No
An ex-wife can be a pain in the neck if she is still single. The poor husband has to settle her in first, before he moves on. At least, that is what Smeep Kang's Second Hand Husband tells you. That, and how important it is for the man to be the bread-winner, never mind how much the wife earns, or does not.

Not that the movie is a completely misogynistic take on marriage and divorce. In fact, Gurpreet (Tina Ahuja), who wants to marry Rajbir (Gippy Grewal), has a very patient family. They have no qualms with Rajbir's separated status, as long as he earns well enough to keep their daughter in comfort, and they are willing to wait for as long as it takes. Gurpreet's brother Jassi (Ravi Kishan) wants her to marry somebody in Canada, but for reasons best known to Gurpreet's parents, they prefer Rajbir. Maybe they believe in love, or maybe they just want to get rid of their ditzy lawyer daughter.

Gurpreet is Rajbir's divorce lawyer, and she is so bad at her job that Rajbir now has to pay his ex-wife Neha (Geeta Basra) almost 2/3rd of his meagre salary as alimony. Gurpreet is, however, smart enough to realise that Rajbir need not pay Neha anything if the latter marries somebody else. Which is how Rajbir finds himself fixing up blind dates for his ex-wife, and she rejects each one.

Rajbir's boss, Ajit (Dharmendra), is a hotel magnate, and he has a roving eye. When his wife Beant (Rati Agnihotri) catches him red-handed with another woman, she demands a divorce, and Gurpreet becomes his lawyer. Rajbir tries to work out the situation to his own benefit, and the script takes a turn for the worse after that. First, however, a few aspects worth pointing out (that underline the chauvinism in the movie).

(i) A man past his prime, at 70-plus, is considered a stud when he sleeps around. He should be forgiven because he loves his wife. He can continue his affairs after promising his wife he will not, since this is considered cute.
(ii) It is more convincing when a woman can be blamed for an extra-marital affair, whether it is the wife, or the mistress.
(iii) Alimony is an unwanted burden, since the ex-wife is only trying to fleece her ex-husband. If she says she has not been able to overcome the trauma of a divorce, she is lying, obviously.
(iv) Any man wearing pink shirts and (weirdly) oven mitts on a date is clearly unsuitable husband material - he is probably homosexual.
(v) Any woman wanting to use sex as a means to further her career is a loose character.
(vi) Any woman who asks her husband to shut up is a shrew.
(vii) The only man who will be interested in a 50-plus divorced woman is a desperate one.

The last point, specifically, is just one of the examples of the various jokes made at the expense of relationships to make this a funny movie. The dialogues not only lack zing, but are a sorry excuse for wit, and the only thing funny in this film is the hysterical brother that Gurpreet has.

Ravi Kishan is, in fact, the most effective actor in this tale of love and divorce. Unfortunately, he disappears without preamble after a point. Yes, he overacts, but he is still funny. Dharmendra as the lecherous old man is quite repelling, but he reminds us why he is still popular in the sequence where he is caught with another woman. Rati Agnihotri has a role similar to ones she has had in the recent past, which is a pity because she can still be a formidable co-star. Vijay Raaz is wasted.

Gippy Grewal, who is the heart throb of Punjabi movies, should probably not shift to Hindi cinema. He is stiff and mildly irritating, and that is a pity given that he is the lead. Tina Ahuja fares no better, and is quite insipid, although her character (which is not explored well enough) is pretty interesting. Geeta Basra does her bit, but hers is not a very substantial role. And the bigger disappointments include the parts that Alok Nath, Sanjay Mishra and Mukesh Tiwari play - all of them display a noticeable lack of enthusiasm.

The hero and heroine jump in and out of song sequences after exchanging meaningful stares at the oddest times. The songs themselves are not very catchy. Since the screenplay meanders quite a bit with its mediocre dialogues and pointless plot points, the movie seems longer than it actually is. And for somebody who is in the middle of an income crisis, Rajbir seems to have plenty of money to spend on clothes, parties, dinners and cars.

Depending on your tolerance and sense of humour, you can choose to watch Second Hand Husband or skip it. If you are a feminist, no matter how much you love slapstick, we suggest you avoid it altogether.
Share. Save. Connect.
Tweet
SECOND HAND HUSBAND SNAPSHOT 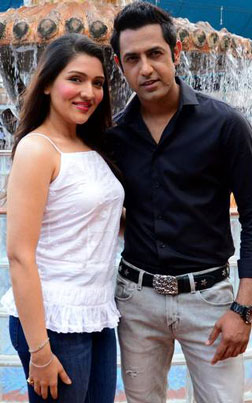 ADVERTISEMENT
This page was tagged for
Second Hand Husband hindi movie
Second Hand Husband reviews
release date
Dharmendra, Gippy Grewal
theatres list
Follow @fullhyderabad
Follow fullhyd.com on
About Hyderabad
The Hyderabad Community
Improve fullhyd.com
More
Our Other Local Guides
Our other sites
© Copyright 1999-2009 LRR Technologies (Hyderabad), Pvt Ltd. All rights reserved. fullhyd, fullhyderabad, Welcome To The Neighbourhood are trademarks of LRR Technologies (Hyderabad) Pvt Ltd. The textual, graphic, audio and audiovisual material in this site is protected by copyright law. You may not copy, distribute, or use this material except as necessary for your personal, non-commercial use. Any trademarks are the properties of their respective owners. More on Hyderabad, India. Jobs in Hyderabad.