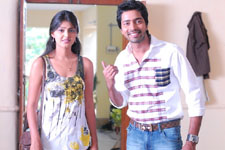 Deepa Garimella / fullhyd.com
EDITOR RATING
6.0
Performances
Script
Music/Soundtrack
Visuals
8.0
5.0
6.0
7.0
Suggestions
Can watch again
No
Good for kids
No
Good for dates
Yes
Wait for OTT
Yes
Considering how mainstream Telugu cinema has fallen into a rut, like the wheels of the Sumo of a villain whose vehicle fails him in the last minute as he realizes he's going to inevitably die in the hero's blood-soaked hands, it is high time someone did an official spoof on our cinema.

Sudigadu has been promoted as a parody on Telugu films of the current age, and it is indeed one. Its story doesn't count - the plot is but a flimsy thread on which jokes are strung. Logic is turned on its head, as Allari Naresh and director Bheemineni Srinivas gleefully rip apart cliches that have been begging to be mocked at for years now.

Shiva (Allari Naresh) is the hero of the film, and makes his entry as a newly-born baby whose pee flows along the hospital floors and causes a thug to trip and fall to his death. This, you see, is his first deed as a superhero. A series of incidents leads to Shiva's parents (Allari Naresh again, and Hema) to go into hiding after they send the baby with his grandmother (Kovai Sarala) to be brought up. Sure enough, Shiva starts talking on Day 1 of his life on Earth. Meanwhile, the guy who died was the son of Thikkala Reddy (Jayaprakash Reddy), who wants to avenge his son's death.

Sudigadu is a film spoof that is more fond tribute than wicked taunt. It begins its satire right from the word Go, with the title sequence accompanied by an Eega-like intro of a child pestering his father to tell him a story. There are some very obvious digs on well-known films (Businessman, Dookudu, Ye Maya Chesave, the spate of Seema films), and some so generic that they can be attributed to pretty much any hero and any movie (the Balakrishna sequence drew plenty of applause, meanwhile). There is the mandatory Omkar spoof (which wasn't done as well as someone like Sivareddy could have) as well.

The comedy has some clever touches, but watch out for a bit of potty humour. Everything about the story is as nonsensical as it gets, and every little cliche that it makes fun of is exaggerated ten times over. There are some concepts inventively used - like the whole Rayalaseema bit. Stereotypes like the thigh-slapping (the film's idea of a school for the specialized filmi Rayalaseema skill of slapping one's thigh was pretty darn good), the melodramatic villains, and the mindless violence - they are all fun to watch.

It's a great set of ideas, and deserved better execution. In fact, Sudigadu fails to be the celebration of nonsense that it could have been. Somehow, the zeal to be funny gets ahead of itself, robbing Naresh of the spontaneity that he has usually brought to his acting. As a whole, Sudigadu is only as good as its trailer - or perhaps a little worse. There's a scene in which a villain fires a bullet at Shiva's parents - by the time the bullet strikes its target, Shiva has arrived at the spot after a journey that could have filled an entire reel. Something about that scene keeps it from being hilarious - the act of trying too hard, perhaps?

In fact, this isn't the best set of jokes they could have come up with. Some sequences could have been avoided. For example, the whole Sayaji Shinde angle didn't have any meat. The "D" mystery (D is the name of the main goon, whose identity is not revealed till the end) was brought to a dull ending.

There was more than enough material on hand, but not used to its capacity. (Note to director: It sure would be good fun if this were turned into a franchise. Heck, with the kind of films we're assaulted with every Friday, we need a Sudigadu every season.) But don't get us wrong - none of this means that Sudigadu is not an enjoyable movie; it's just that it could have been a fantastic one.

Naresh is his usual vivacious self, and this role isn't a departure from his other comedies. Interestingly, he is perhaps the only leading actor detached enough from the mainstream to be able to pull off something like this, and we're all thankful for it.

Jayaprakash Reddy has considerable screen time, but everyone else just delivers a few scenes here and there, with no one having a dedicated full-length role. M S Narayana, Kodavalasa and L B Sriram are "cast" as 23-year-olds, but their roles fizzle off after a point. Brahmanandam and Ali have brief appearances, and Venu Madhav even miniscule. It was good to see Krishna Bhagawan back. Kovai Sarala is not as grating as she usually is. The heroine has performed well, meanwhile.

The idea of crafting an entire song from meaningless lyrics was sheer genius. But the songs in general could have been shorter. The visuals are neat and well-done.

In all, Sudigadu is good for a one-time watch, and the comic relief you may have been seeking in a long time. Hoepfully, this is just the beginning.
Share. Save. Connect.
Tweet
SUDIGADU SNAPSHOT 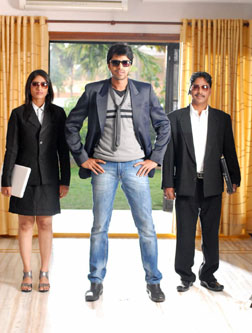 ADVERTISEMENT
This page was tagged for
sudigadu telugu movie
Sudigadu telugu movie
Sudigadu reviews
release date
Allari Naresh, Jayaprakah Reddy
Follow @fullhyderabad
Follow fullhyd.com on
About Hyderabad
The Hyderabad Community
Improve fullhyd.com
More
Our Other Local Guides
Our other sites
© Copyright 1999-2009 LRR Technologies (Hyderabad), Pvt Ltd. All rights reserved. fullhyd, fullhyderabad, Welcome To The Neighbourhood are trademarks of LRR Technologies (Hyderabad) Pvt Ltd. The textual, graphic, audio and audiovisual material in this site is protected by copyright law. You may not copy, distribute, or use this material except as necessary for your personal, non-commercial use. Any trademarks are the properties of their respective owners. More on Hyderabad, India. Jobs in Hyderabad.