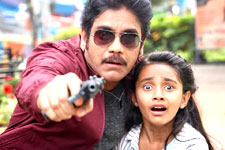 Kritika Deval / fullhyd.com
EDITOR RATING
1.5
Performances
Script
Music/Soundtrack
Visuals
3.0
3.0
1.5
1.0
Suggestions
Can watch again
No
Good for kids
No
Good for dates
No
Wait to rent it
No
Picture this. A bunch of male cops and one female cop (Myra Sareen) sit down to drink together, and one of the men says to the woman something along the lines of, "I'm single because having met a woman like you, I decided to never see other women." Then the woman's all, "So you go for men now? I didn't think you were like that." And then they all laugh. It's such an awkwardly bigoted dad joke that you realise that RGV is old, and Nagarjuna is old, and so is everybody in this movie that's not Myra Sareen and Baby Kaavya who plays Nagarjuna's daughter.

This wasn't the only inane thought to flit thorough this writer's mind trying to survive long stretches of cringe peppered with intermittent triggers of sharp headaches, the latter generally occurring when somebody gets shot in the head. Was it funny when we explained our joke? We have no way of knowing. Officer seems to have broken something in our brain that helps us identify wit of any kind.

We've seen some genuine pinnacles of bad cinema here at fullhyd.com, some so bad they came out the other end to become brilliant. We doubt, however, that there was ever another film less in need of making.

Officer has Nagarjuna playing a cop called Shiva (colour us surprised), who's out to get another, highly decorated, cop called Passary for what is said to be corruption but what turns out to be a whole lot of psychopathic bloodshed and mayhem and lots of cliché villainy. Shiva and Passary have an oddly homoerotic relationship full of long looks and lingering glances. There's a bit towards the end of the first half where they get into each others faces and there's a caressing handshake that just has to be a booty or we'll eat our boots.

Ostensibly, Officer is the story of the ultimate good cop who is a True Believer in the System, vs the ultimate bad cop whose hubris turns into a monomaniacal belief the he is the System. In reality, it's a movie so derivative, we could've been watching one of those video mashups on YouTube. On that note: Hey, Mr. Verma! The '90s called! They want their shitty plot devices back!

Myra Sareen is basically there to, in actual words, say that she, as the token woman, is in fact intelligent. She says it over and over and over again. Baby Kaavya is so creepy. Most people who had a kid who talked like that would probably set it on fire, because it's obviously haunted. Nagarjuna is intense and smiles creepily and looks like that creepy uncle everyone asks you to stay away from, which makes sense because all the male characters are written and directed by RGV and he's the ultimate creepy uncle. Everybody is very obvious and very boring because RGV obviously wrote out a plot and decided that any and all exposition would be done via people reading it out loud.

The film looks really dated, and there's too many crotch shots and too many close-ups of the pores in people's faces and their nostrils. The fight scenes are nonsensical and jarring, and far too slow-paced to be shocking if it weren't for how ear-piercingly loud they are. The music just is.

That's actually the least negative thing to be said about the entire film, too - that it exists. RGV obviously ran out of stories to tell sometime in the '90s, and now spends mysteriously-gotten time and money sort to cutting them up, juggling them together, picking up a few pieces and calling them cinema. He also somehow manages to talk big names to go along with him in his quest to fool you into thinking it is legit. Watch literally anything else.
Share. Save. Connect.
Tweet
OFFICER (TELUGU) SNAPSHOT 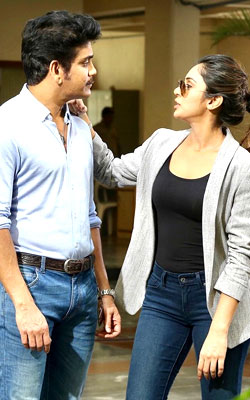 See Officer (Telugu) full details
OFFICER (TELUGU) USER REVIEWS
1 - 5 OF 5 COMMENTS
POSITIVE  |  NEGATIVE |  NEWEST  |  OLDEST  |  MOST HELPFUL  |  LEAST HELPFUL
USER RATING
1.0
1 USER
Performances
Script
Music/Soundtrack
Visuals
NA
NA
NA
NA
Can watch again - NA
Good for kids - NA
Good for dates - NA
Wait to rent it - NA
An observer on 5th Jun 2018, 8:44pm | Permalink
Of late, I wasn't feeling as inclined to read fullhyderabad movie reviews because of a couple of reviewer writers ruining it, turning this website into their fiefdom where they could show off all their culinary skills in the English language. It has become quite an exasperating exercise to go through their reviews garnished with their trademark privileged cocky I-am-too-intelligent attitude. So, just when I lost all my hope and quite resigned to the idea of fullhyderabad.com losing its mojo forever what with review writing (on this website) has come to represent these days--oh wait, the real super star of movie reviews, the ever-fabulous Kritika Deval has made a silent come back. Wow. Welcome back. We miss you a lot! We miss your style. Thank you so much for returning...
Krishna on 3rd Jun 2018, 7:48pm | Permalink
Oh how I wanted this movie to be good, after seeing movie after movie of RGV's flopping, I thought officer would be the one who would rise and bring RGV to the great director he once was. But no. Officer was a bad movie on its own, but the fact that I wanted it to be a good movie so bad made it even worse for me, such a shame. Now I just have to rewatch RGV's 90s movies.
RATING
1
devil on 3rd Jun 2018, 1:46pm | Permalink
political correctness is gay.
Madhu on 2nd Jun 2018, 6:28pm | Permalink
Are you the one with the short straw ? Poor you ! Wow Nela ticket followed by Officer. What next ?
At least the reviews are entertaining ...
Sateesh on 2nd Jun 2018, 5:46pm | Permalink
It's more like an abuse of RGV than a review. Grow up. And also, is there a cinema ever in Telugu that can be called modern????And what is modern?????
LEAVE A COMMENT
fullhyd.com has 700,000+ monthly visits. Tell Hyderabad what you feel about Officer (Telugu)!
MORE MOVIES
Latest Reviews
The 355
83
83 - Telugu
Shyam Singha Roy
The Matrix Resurrections - H...
more
The Matrix Resurrections
Pushpa: The Rise - Hindi
Pushpa: The Rise
Spider-Man: No Way Home
Spider-Man: No Way Home - Hi...
Spider-Man: No Way Home - Te...
Chandigarh Kare Aashiqui
Akhanda
Satyameva Jayate 2
Ghostbusters: Afterlife
Contemporary Reviews
Rajugadu
Bhavesh Joshi Superhero
Veere Di Wedding
Kaala
Jurassic World: Fallen Kingd...
more
Jurassic World: Fallen Kingd...
Jurassic World: Fallen Kingd...
Abhimanyudu
Solo: A Star Wars Story
Nela Ticket
Bioscopewala
Parmanu: The Story of Pokhra...
Ammammagarillu
Kaasi (2018)
Random Reviews
Kalisi Naduddam
Maa Pelliki Randi
Bharat Bhagya Vidhata
Premagni
13 Going on 30
more
The Beastmaster
Rahasya
Bhayya
Junction
The Expendables (Telugu)
Naaku O Lover Vundi
Barfi
Shuddh Desi Romance
Dawn Of The Planet Of The Ap...
Dabangg 3
SEARCH MOVIES
Dissatisfied with the results? Report a problem or error, or add a listing.
ADVERTISEMENT
SHOUTBOX!
{{todo.name}}
{{todo.date}}
[
ip{{todo.ip}}
]
{{ todo.summary }}... expand »
{{ todo.text }} « collapse
First  |  Prev  |   1   2  3  {{current_page-1}}  {{current_page}}  {{current_page+1}}  {{last_page-2}}  {{last_page-1}}  {{last_page}}   |  Next  |  Last
{{todos[0].name}}

ADVERTISEMENT
This page was tagged for
Officer (Telugu) telugu movie
Officer (Telugu) reviews
release date
Nagarjuna Akkineni, Myra Sareen
theatres list
Follow @fullhyderabad
Follow fullhyd.com on
About Hyderabad
The Hyderabad Community
Improve fullhyd.com
More
Our Other Local Guides
Our other sites
© Copyright 1999-2009 LRR Technologies (Hyderabad), Pvt Ltd. All rights reserved. fullhyd, fullhyderabad, Welcome To The Neighbourhood are trademarks of LRR Technologies (Hyderabad) Pvt Ltd. The textual, graphic, audio and audiovisual material in this site is protected by copyright law. You may not copy, distribute, or use this material except as necessary for your personal, non-commercial use. Any trademarks are the properties of their respective owners. More on Hyderabad, India. Jobs in Hyderabad.