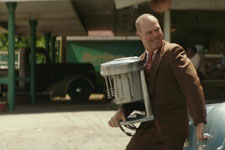 Swaroop Thotada / fullhyd.com
EDITOR RATING
7.5
Performances
Script
Music/Soundtrack
Visuals
9.0
8.0
7.0
8.0
Suggestions
Can watch again
Yes
Good for kids
Yes
Good for dates
Yes
Wait to rent it
No
Last week in our review of Live by Night, we lamented about how a potentially engaging film was brought down by the charisma vacuum created by an unsuitably understated performance of its protagonist. Now in The Founder, we see what wonders an electrifying performance can do for a film. The Founder is as much a demonstration of Keaton's prowess as it is the story of Ray Kroc's rise. The film is a celebration of spot-on casting and a potent mix of zealous performances.

Michael Keaton plays Ray Kroc as an almost over-the-top eccentric businessman, bustling with optimism, driven by a vision, aided by a sense of opportunity and thoroughly assured by his unwavering faith in the power of ambition. If all this self-help jargon got you to figure him out as a hardcore capitalist, you made no mistake - that's what he is.

The film begins with Ray's humble beginnings, as he is trying to sell his theory to weary restaurant owners that supply creates demand, along with the five-spindled milkshakes he ultimately supposes to sell. But they don't buy enthusiastic demonstration and visionary-posing. His customers probably can see through his overtly polished salesman slang, or aren't smart enough to give his thesis a thought.

He almost drags the machine every evening to the trunk of his car, but only until he receives an order for eight of them from the McDonalds brothers (Nick Offerman and John Carroll Lynch), who have a completely different problem. Thanks to their rapidly thriving business, they have more on their hands than they can handle, even with all the cutting-edge techniques they have in place. They have even devised a speed-delivery system which enables them serve a burger in 30 seconds, and that is unheard of before.

Ray is helplessly smitten by their stand when they walk him through their custom-designed kitchen that screams efficiency and innovation, and is all ears for their success story. Flattered by his attention and keenness, they demonstrate the evolution of the model from the scratch. Ray is sent to bouts of ecstasy as they punctuate their success tale with puzzling pauses and cheerful twists, and he almost has an orgasm at the end. This short scene of montages where you see them rehearsing on a chalk-drawn model kitchen, with Patrick Street playing in the background, is also one of the highlights of the film as it lets you in on how this gigantic corporate mammoth had its roots in innovation, conviction and pure genius.

Ray finds his calling in their idea, and starts owning it. We all know the story that he ultimately boots them out of their own franchise, but what is it precisely that didn't work in their favour? The film doesn't show them as naïve and gullible, which you might assume given how they ended up. After all they are the visionary businessmen who crafted a model unheard of before and had the guts to take risks, and the film portrays them in all of their creative grit.

What went against them was their rigid idealism that didn't quite succumb to the aggressive capitalistic hunger. And they appear incompetent and floundering beside Kroc's towering corporate machismo. Or perhaps the film has portrayed them through the lens of the ruthless Ray. This film is as much a failure story of the McDonald brothers as much as it is an account of Kroc's triumphant foray into glory.

Its Keaton's show all the way as he flawlessly pulls off Ray Kroc's descent into thicker shades of gray. What Kroc teems with is not a consuming greed or passionate evil, but just a helpless fascination with ambition. He is fortunate that his morals fit his aspirations like a glove. There is no trace of guilt, as his qualms dwarf before his obsession with making it big. He considers the hesitant McDonald bothers or anyone who he thinks are settling for less, as lazy, unimaginative and gutless inferiors. You see him express his disdain towards the idle rich as he convinces his wife Ethel (Laura Dern) they should get new friends who are in tune with his yearning. You see him meditating to self-help audio tracks, with the religiosity of a Buddhist monk. And Keaton's effervescent take almost makes this monster appealing and likeable.

The film which flaunts its sense of irony in the title plays mostly non-judgmental, but only so much rationalization can be thrown to justify a corporate scandal. Like in Wolf Of Wall Street and There Will Be Blood, we see an entrepreneur making no stops for emotional evaluation, but there is no fall, no payback and no repentance. Did we forget that this is a true story? Now it's all the more horrifying, isn't it?
Share. Save. Connect.
Tweet
THE FOUNDER SNAPSHOT 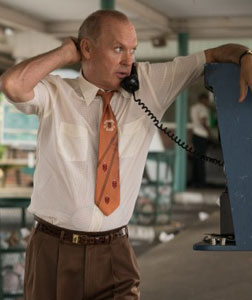 ADVERTISEMENT
This page was tagged for
The Founder english movie
The Founder reviews
release date
Michael Keaton, Nick Offerman
theatres list
Follow @fullhyderabad
Follow fullhyd.com on
About Hyderabad
The Hyderabad Community
Improve fullhyd.com
More
Our Other Local Guides
Our other sites
© Copyright 1999-2009 LRR Technologies (Hyderabad), Pvt Ltd. All rights reserved. fullhyd, fullhyderabad, Welcome To The Neighbourhood are trademarks of LRR Technologies (Hyderabad) Pvt Ltd. The textual, graphic, audio and audiovisual material in this site is protected by copyright law. You may not copy, distribute, or use this material except as necessary for your personal, non-commercial use. Any trademarks are the properties of their respective owners. More on Hyderabad, India. Jobs in Hyderabad.