Deepa Garimella / fullhyd.com
EDITOR RATING
4.0
Performances
Script
Music/Soundtrack
Visuals
7.0
4.0
7.0
7.0
Suggestions
Can watch again
No
Good for kids
No
Good for dates
No
Wait to rent it
Yes
In our films, "socio-fantasy" only means ancient weapons. And, of course, heavier designer sarees and sherwanis all around.

Oo Kodathara Ulikki Padathara, the latest handiwork of the Manchu siblings (Lakshmi Prasanna and Manoj don't just act in UKUP - the former produced the film, and the latter is credited with having directed the stunts), has one foot in convention and one in novelty. The result is, understandably, clumsy. And a lot like the first bite of a plate of dry upma made with not enough ghee - you don't quite know what to make of it.

An attempt to marry Chandramukhi and Arundhati, UKUP only seems like an amateurishly put together play.

It's not entirely bad, for the film does have an element of melodrama, and a fairly interesting premise. A tough-looking biker dude (Manchu Manoj, whose character doesn't seem to have a name) arrives at an ancient palace known as the Gandharva Mahal, seeking to be a boarder there. In fact, having rented out the dilapidated mansion to a bunch of tenants (many of whom don't even pay the rents), Gandharva Mahal's noble and gentle owner Rayudu (Prabhu) and his family (Deeksha Seth and others) live in its outhouse.

Rayudu wants to get his daughter (not Deeksha Seth - the other one) married, and a seemingly fine match comes along. However, the prospective groom's family demands a hefty dowry - Gandharva Mahal.

What follows is a series of violent events involving the ghost of the great Narasimha Rayudu (Nandamuri Balakrishna). Evidently, the palace has a past, and so does the biker, who has by now won the confidence of Rayudu and his folks. Meanwhile, Lakshmi Manchu lurks around, dressed as a tramp who appears once in a while and stares forlornly at the palace.

UKUP displays creativity in ideas and poverty in execution. The makers try to lace with modernity and slickness what could have been a run-of-the-mill story, but this is an attempt evident more in the music than in anything else. There's also a lot of graphic violence all over the place. For example, the first song in the movie, which is basically Manoj's fictionalized version (that he uses to scare some people - look, we don't have time for this) of his past as an ax-murderer, is stylish but hard to watch because it has such explicit (and, in hindsight, pointless) gore.

A bit of comedy, and the filmi drama keeps you engaged, but you lose interest in the proceedings once you get the general idea of what the flashback was. The villain, Bhupathy, is such a pathetic character - not evil as much as he is stupidly pathetic - that you don't even care about the redemption that will eventually follow.

For Balakrishna, this is perhaps a great path to follow at this stage in his career. He looks sufficiently majestic in roles that require him to set regally atop a throne, smile benevolently at crowds of villagers, walk around like a leader - those that don't necessary require him to speak or pull science-defying stunts. And films like these, in which he doesn't have to prance around with women one-third his age, and yet, gets to spout semi-political dialogues, do a lot of good to his star status.

Manchu Manoj has a lot of enthusiasm, and seems to also handle stunts well. However, even given his worked-on physique, his acting leaves a lot to be desired. Deeksha Seth has a lackluster role.

Sonu Sood does his usual villain bit, Prabhu exudes grace as always, and Saikumar is dressed funny (why exactly, by the way?). The comedians are quite hilarious to be around. And it's high time Lakshmi Prasanna started sounding like a Telugammayi.

The music is trendy and foot-tapping, and the visuals and graphic scenes are well-done

UKUP is an ambitious film, but its makers have some way to go before they can make a Chandramukhi. Watch it if you're curious, but don't take the kids.
Share. Save. Connect.
Tweet
OO KODATHARA ULIKKI PADATHARA SNAPSHOT 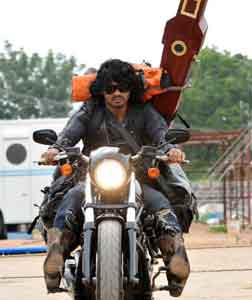 ADVERTISEMENT
This page was tagged for
Oo Kodathara Ulikki Padathara telugu movie
Oo Kodathara Ulikki Padathara reviews
release date
Manchu Manoj Kumar, Balakrishna
theatres list
Follow @fullhyderabad
Follow fullhyd.com on
About Hyderabad
The Hyderabad Community
Improve fullhyd.com
More
Our Other Local Guides
Our other sites
© Copyright 1999-2009 LRR Technologies (Hyderabad), Pvt Ltd. All rights reserved. fullhyd, fullhyderabad, Welcome To The Neighbourhood are trademarks of LRR Technologies (Hyderabad) Pvt Ltd. The textual, graphic, audio and audiovisual material in this site is protected by copyright law. You may not copy, distribute, or use this material except as necessary for your personal, non-commercial use. Any trademarks are the properties of their respective owners. More on Hyderabad, India. Jobs in Hyderabad.