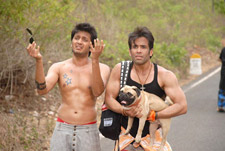 Nupur Barua / fullhyd.com
EDITOR RATING
4.0
Performances
Script
Music/Soundtrack
Visuals
6.0
4.0
5.0
4.0
Suggestions
Can watch again
Yes
Good for kids
No
Good for dates
Yes
Wait for OTT
No
Seven years after Rahul and Karan took bawdy humour and innuendos to a new level, Ekta Kapoor presents Adi and Sid to the world in the sequel to Kyaa Kool Hain Hum - Kya Super Kool Hain Hum. This time, it is Sachin Yardi who takes on the reins as writer and director of the film, as is his due, since he was the one who wrote the first film, and who would know these characters and their inanity better?

Adi (Tusshar) is a struggling actor, who earns his living by shooting for teleshopping commercials of fairness creams and gym equipment. He worships Rohit Shetty, the director, and keeps stalking him for a role.

Adi's room-mate is his former college friend and now struggling DJ, Sid (Riteish Deshmukh). Sid loves music and women, in that order, but it is his pedigreed dog, Sakru, which is his first love. Sid makes money from Sakru's mating sessions with various female pugs.

Meanwhile, Adi meets the rich and rebellious Simran (Neha Sharma) in a bus, and is very taken in by her. He also gets a role in Rohit Shetty's Chingum, and decides that Simran is the love of the life. Overenthusiastic, he proposes to her, and the poor girl runs off to Goa with her best friend Anu (Sarah Jane Dias), and with the diamond ring that Adi puts on her finger - not before telling him that she prefers girls, though.

So Adi and Sid rush to Goa (the diamond on the ring belonged to Sakru's collar, you see), and into one unfortunate situation after the other. So there is the eccentric Francis Marlo (Anupam Kher), Anu's father, who believes, after very little convincing from Baba 3G (Chunkey Pandey), that a female pug is his mother reborn; a gay nightclub owner Adam (Howard Rosemeyer), who is in love with Sid; a lisping laundry and suit supplier Popat (Razzak Khan), whose dialogues earn him more slaps than accolades; an old college friend Trippy (Kavin Dave), whose bungee-jumping uncle died and left him millions; and a host of other characters that make life more chaotic for these two friends as they try to win their women back.

There is no logic at all in anything that you see on the screen - it is a completely chaotic plot brimming with more sexual innuendos and gay jokes than you have ever seen on the big (or small) screen. The only censored parts are the mating shots of the dogs. Everything else is laid out for the audience; and neither the director nor the actors shy away from OTT references to various parts of the body and other adult insinuations, with a few movie parodies thrown in here and there. In fact, the teaser trailers say it all, and there is more of similar stuff.

The actors all seem to be having a blast. Riteish Deshmukh steals the show, and is in his element. His comic timing and the spoofing of SRK-like displays of emotion are sure to keep you in splits. He is the star of the film, along with Sakru (who was originally Fakhru, at least in the trailers).

Tusshar is not as good as he was in earlier comedies, and he seems a tad uncomfortable. In fact, the girls - Sarah Jane Dias and Neha Sharma - are better performers than Tusshar. They even have better chemistry with each other than with their on-screen love interests.

Anupam Kher is passable as the crazy father, and Chunkey Pandey is underused as the pseudo baba. Kavin Dave could have done with a little more screen time, though. He is perfect as the doped-out friend.

The music is catchy, and the new version of "Main Aayi Hoon UP-Bihar Lootne" will definitely elicit a few whistles from the front rows. "Dil Garden Garden Ho Gaya" is already a hit. The music videos are funnier than the movie itself, although they seem to have very little connection with the plot.

The costume design is ordinary, but it is the production design that is a let-down. Cinematography is dull, and the entire film needs colour correction.

Kyaa Super Kool Hain Hum is a long movie, and the humour stretches and tries your patience after a point, but do not expect a story that makes sense. It is an adult film, so avoid watching it with your family members - some scenes can get embarrassing. Watch only if you have nothing else to do, but we still recommend a revisit to Kyaa Kool Hain Hum, as a better alternative.
Share. Save. Connect.
Tweet
KYA SUPER KOOL HAIN... SNAPSHOT
KYA SUPER KOOL HAIN HUM SNAPSHOT 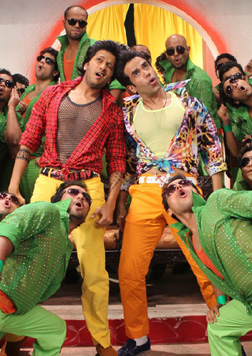 ADVERTISEMENT
This page was tagged for
kyaa super kool hain hum 2 movie in hindi hd
Kya Super Kool Hain Hum hindi movie
Kya Super Kool Hain Hum reviews
release date
Tusshar, Riteish Deshmukh
Follow @fullhyderabad
Follow fullhyd.com on
About Hyderabad
The Hyderabad Community
Improve fullhyd.com
More
Our Other Local Guides
Our other sites
© Copyright 1999-2009 LRR Technologies (Hyderabad), Pvt Ltd. All rights reserved. fullhyd, fullhyderabad, Welcome To The Neighbourhood are trademarks of LRR Technologies (Hyderabad) Pvt Ltd. The textual, graphic, audio and audiovisual material in this site is protected by copyright law. You may not copy, distribute, or use this material except as necessary for your personal, non-commercial use. Any trademarks are the properties of their respective owners. More on Hyderabad, India. Jobs in Hyderabad.