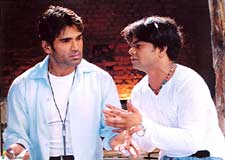 Nupur Barua / fullhyd.com
EDITOR RATING
5.0
Performances
Script
Music/Soundtrack
Visuals
5.0
6.0
5.0
6.0
Suggestions
Can watch again
No
Good for kids
No
Good for dates
Yes
Wait for OTT
Yes
A peek into the lives of the people who bring alive dreams on the silver screen is not a new concept - think Guddi, Om Shanti Om, Luck By Chance, and other similar movies. It is always intriguing for people not involved in tinsel town to know more about how things work, and if the film can entertain you as well, then it is an evening well-spent.

Mere Dost Picture Abhi Baki Hai almost succeeds in making it all worthwhile - almost. Amar Joshi (Suniel Shetty) from Benares defies his father (Rajeev Varma) and pushes off to London to study filmmaking. Armed with vision and knowledge, he then arrives in Mumbai, with a script in hand, and begins to look for a producer who can breathe life into his story of a rape victim. Amar's only connection with anything Bollywood is Suraj (Rajpal Yadav), a television actor who is still struggling to make his mark in the entertainment industry.

With Suraj's help, Amar runs from producer to producer, all in vain. He is about to give up hope, when he runs into Monty Chhada (Rakesh Bedi), a PR man, who offers to become a producer. They hire a star secretary (Akhil Mishra), who will get them the actress Mohini (Udita Goswami). Mohini is always accompanied by her overbearing mother (Neena Gupta), and the makers have to live with it.

Things seem to be sorted for Amar, when suddenly Monty disappears, and the underworld don Sudama Bhosle (Deepak Shirke) enters Amar's life as a prospective producer. He insists on an item song to showcase his untalented moll, Tina (Mumait Khan). Amar is past desperation, when Sudama disappears and Monty reappears, this time with renowned silver jubilee writer Baig (Om Puri). Just when Amar breathes a sigh of relief, Baig changes the story from that of a rape victim's troubles to a family movie filled with rain sequences.

Not that it is all fun and laughter, mind. While the concept of a film within a film (a tough one) seems to work with this one, the writer and director seem to become overindulgent after a point, by reiterating the same banal stuff over and over again. We get that one has to either demand or supply sexual favours (depending on one's status) to become a hot shot in the entertainment industry, but the makers of the film to overboard trying to push the point home.

Given that the movie releases almost half a decade (a long, long time in the industry) after it was made, the innuendos and underworld threats seem a little outdated. It would have been perhaps a more credible story if it were set in the Bombay of the 1980s and 1990s. The humour becomes a little forced after the first half.

The music is a little obsolete now, although it could have been a decent hit if the album was released when it was supposed to. The production and costume designs are relatively better.

Suniel Shetty is, surprisingly, the only one who is almost flawless in the execution of his character. He is subtle, and you begin to root for him almost immediately.

Udita Goswami, Shawar Ali and Shayan Munshi are nowhere as decent as they once were (if ever). They ham their way through the movie.

Rakesh Bedi and Om Puri try their best to hold on to the humour, but they become redundant after a point. Deepak Shirke is definitely OTT, but Mumait Khan makes a convincing ambitious-yet-dumb moll.

Mere Dost Picture Abhi Baki Hai is worth one watch, but do not get your hopes too high. It is no Bowfinger - in fact, it does not even come in the same league as Luck By Chance - but that could be because the director had a producer who changed the story to suit his own sensibilities. It has a lot of promise, but it comes into our lives a little too late to be appreciated the way it would have been five years ago.
Share. Save. Connect.
Tweet
MERE DOST PICTURE ABHI... SNAPSHOT
MERE DOST PICTURE ABHI BAKI HAI SNAPSHOT 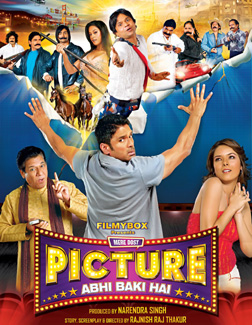 ADVERTISEMENT
This page was tagged for
Mere Dost Picture Abhi Baki Hai hindi movie
Mere Dost Picture Abhi Baki Hai reviews
release date
Suniel Shetty, Rajpal Yadav
theatres list
Follow @fullhyderabad
Follow fullhyd.com on
About Hyderabad
The Hyderabad Community
Improve fullhyd.com
More
Our Other Local Guides
Our other sites
© Copyright 1999-2009 LRR Technologies (Hyderabad), Pvt Ltd. All rights reserved. fullhyd, fullhyderabad, Welcome To The Neighbourhood are trademarks of LRR Technologies (Hyderabad) Pvt Ltd. The textual, graphic, audio and audiovisual material in this site is protected by copyright law. You may not copy, distribute, or use this material except as necessary for your personal, non-commercial use. Any trademarks are the properties of their respective owners. More on Hyderabad, India. Jobs in Hyderabad.