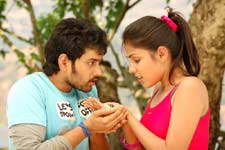 Deepa Garimella / fullhyd.com
EDITOR RATING
4.0
Performances
Script
Music/Soundtrack
Visuals
5.0
3.0
5.0
6.0
Suggestions
Can watch again
No
Good for kids
No
Good for dates
No
Wait for OTT
Yes
The heartening thing about our movies is that impossible is not an option. Even if all else fails (but provided you're in a temple), God will somehow get a bird to poop on your ex-lover's fiance's expensive Versace wedding suit, thus sparking off a series of events that will lead to the elders calling off the ill-favoured wedding.

With this optimism walks in Tooneega Tooneega, a fine example of the fact that irrespective of your capabilities, there is no limit to what you can set out to do, if your father is a big-shot producer with several friends willing to walk around in your debut movie.

Tooneega Tooneega is an annoyingly silly glob of campus romance, that deals with the love story of Karthik Ramaswamy (Sumanth Ashwin) and Nidhi (VJ Rhea). Nidhi is the daughter of the wealthy Ravindra Babu (Nagababu), and Karthik is the son of the household cook (Prabhu).

A decade after a tiresome childhood spent playing cruel pranks on Nidhi, Karthik meets her again at a summer camp organized by Ravindra Babu for his business partners. The two frolic around and bond over animals, pranks and dance classes, with Karthik falling for Nidhi and Nidhi falling for Karthik. We could have joked about how this is because Nidhi is an animal lover, but that would be cruel. To the animals. We'd decided that no animals would be hurt during the writing of this review.

Soon, a misunderstanding, a badly-dressed vamp and a family obligation cause Karthik to move out of Nidhi's life while keeping his love a secret from everyone involved. Now, Nidhi is engaged to her cousin, Karthik's father Ramaswamy is exiled from Ravindra Babu's household (this, despite Ramaswamy and Ravindra Babu being the thickest of friends from their boyhood), and Karthik is downright depressed.

Meanwhile, a family friend called Dr. James (Sayaji Shinde) skulks around, trying to reunite the two lovers. In the end, they do unite, but not before the movie throws one predictable scene after another at us.

Tooneega Tooneega was intended to be an enjoyable no-frills romance for the campus crowd. However, it substitutes cuteness for inaneness, and the movie's determination to stay away from logic lends it a stunning quality of unwatchableness.

Family fun, evil schemes and childish banter make up the drama of the film. These are aided by a cast that consists of too many characters, most of whom are as useful as Manmohan Singh's larynx.

Not only is the script amateurishly written, it is also even more amateurishly rendered by the lead pair. Sumanth Ashwin looks like a kid, and has a lot of work cut out for him. VJ Rhea isn't great either, but she should have at least gotten someone else to dub for her - her diction (or that of whoever dubbed for her) is unbelievably bad.

The only things going for the movie are the senior actors - Naga Babu, Prabhu, Sita etc. - who seem to be doing M S Raju a favour. The music is avoidable, but the cinematography is okay for what seems to be a medium-budget movie.

Avoid this movie. Even if you're stranded at the theatres with no one for company.
Share. Save. Connect.
Tweet
TOONIGA TOONIGA SNAPSHOT 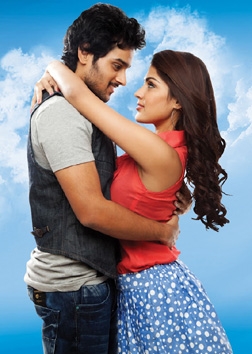 ADVERTISEMENT
This page was tagged for
Tooniga Tooniga telugu movie
Tooniga Tooniga reviews
release date
Sumanth Ashwin, VJ Rhea
theatres list
Follow @fullhyderabad
Follow fullhyd.com on
About Hyderabad
The Hyderabad Community
Improve fullhyd.com
More
Our Other Local Guides
Our other sites
© Copyright 1999-2009 LRR Technologies (Hyderabad), Pvt Ltd. All rights reserved. fullhyd, fullhyderabad, Welcome To The Neighbourhood are trademarks of LRR Technologies (Hyderabad) Pvt Ltd. The textual, graphic, audio and audiovisual material in this site is protected by copyright law. You may not copy, distribute, or use this material except as necessary for your personal, non-commercial use. Any trademarks are the properties of their respective owners. More on Hyderabad, India. Jobs in Hyderabad.