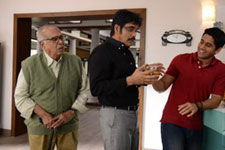 Ravi Kandala / fullhyd.com
EDITOR RATING
6.0
Performances
Script
Music/Soundtrack
Visuals
6.0
6.0
8.0
8.0
Suggestions
Can watch again
No
Good for kids
No
Good for dates
No
Wait to rent it
No
Vikram Kumar must have had a tremendous amount of pressure on his 2-film-old shoulders. The fact that the 3 generations of the Akkineni family were acting in his movie was enough to send expectations through the roof. And when ANR passed away during the making of the film, and the film thus earned the additional qualification of being ANR's last movie, the pressure must've increased thousand-fold. That the man delivers a fairly decent product under such pressure bodes well for him.

Manam is a completely illogical tale, easy to dismiss as impossible to happen in real life. But in reel life, where liberties can be taken at the creator's whims, Manam is an implausible tale told with finesse. It features a college student Nagarjuna (Naga Chaitanya), a business magnate Nageswara Rao (Nagarjuna), an old man Chai (short for Chaitanya, played by Nageswara Rao), and two lovely ladies Anjali (Shriya Saran) and Priya (Samantha). The lives of these 5 characters intertwine time and again over an 80-year-long period and form the plot of this movie.

The director scripts himself a long tale, and spins a 3-hour yarn with these primary characters. He adds several impressive touches to the film to give excellent period detailing. For the 1980s, instead of dressing up the characters in garish costumes, he simply sets the hero up in an office with transparent walls, big black telephones and switchboards in black. The pre-independence era is recreated by the cars shown around, while the current generation is characterized by the coffee shops and the malls.

ANR has a pretty limited role that starts just before the interval, and he is as wonderful as ever. His energy and enthusiasm shine through, and help in adding this to his list of special roles. Nagarjuna, who had a banal previous release in Bhai, makes a strong comeback with Manam. He looks handsome and acts quite well. He is the sutradhaar of the entire film, and carries it on his shoulders. Naga Chaitanya shows some improvement.

The ladies acquit themselves pretty well - both Shriya and Samantha carry off their dual roles with aplomb. The rest of the cast is barely there, and we do not miss them either.

Anoop Rubens scores good tunes for the songs, and does even better in terms of the background score. The background music when the little surprise comes out in the end is especially nice. The cinematographer does a fantastic job of capturing the different eras, and gives the entire film a superb look. The art department also deserves special mention for the completely realistic sets.

The only issue that Manam has is that it sags quite a bit due to the multiple characters and storylines. It gets quite slow sometimes, and the compulsion they feel to include all the references to ANR's previous films adds to the length.

Manam is indeed a celebration as Nagarjuna mentioned. Give it a go, but only if you can pardon the length and are willing to suspend logic.
Share. Save. Connect.
Tweet
MANAM SNAPSHOT 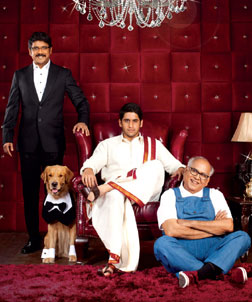 ADVERTISEMENT
This page was tagged for
Manam telugu movie
Manam reviews
release date
Akkineni Nageswara Rao, Akkineni Nagarjuna
theatres list
Follow @fullhyderabad
Follow fullhyd.com on
About Hyderabad
The Hyderabad Community
Improve fullhyd.com
More
Our Other Local Guides
Our other sites
© Copyright 1999-2009 LRR Technologies (Hyderabad), Pvt Ltd. All rights reserved. fullhyd, fullhyderabad, Welcome To The Neighbourhood are trademarks of LRR Technologies (Hyderabad) Pvt Ltd. The textual, graphic, audio and audiovisual material in this site is protected by copyright law. You may not copy, distribute, or use this material except as necessary for your personal, non-commercial use. Any trademarks are the properties of their respective owners. More on Hyderabad, India. Jobs in Hyderabad.