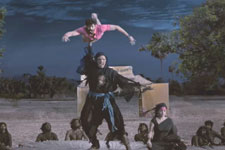 Sonali Dabade / fullhyd.com
EDITOR RATING
3.0
Performances
Script
Music/Soundtrack
Visuals
4.0
2.0
3.0
3.0
Suggestions
Can watch again
No
Good for kids
No
Good for dates
No
Wait to rent it
No
Sarabha is merely another badly-made occult movie coming out of Tollywood. There's almost nothing to be salvaged from the rubble that the audience finds itself with at the end of it all.

So a bus belonging to a wedding party is trundling down what looks like a deserted stretch of barren land. People are singing and celebrating, the groom is making eyes at the bride, the bride is coyly blushing, and just as all feels like clear blue skies, a great spectre rises out of the earth, plays dice with the bus and leaves everyone in the dust.

The groom, now possessed, rises, slings the bride over his shoulder, and walks off to offer her to Chandraksha (Puneet Issar), who is doing an occult thing to make all the ghosts of the world his slaves and become all-powerful. This is the 18th bride to be sacrificed, and now he must find a spot that will "host" the final worship of Chanda Bhairavi, the fearsome goddess his cult and he follow.

All this is just the first five minutes of the movie. Five minutes in which you will see CGI that will boggle your mind and make you wonder why you actually made it here. And then there is the hero's entry, replete with a fight with village goons and the mandatory but completely unnecessary intro song.

Sarabha (Aakash Kumar Sehdev) lives with his mother Parvathamma (Jaya Prada). We don't know what he does apart from supporting his uncle Chinna Rao (Nassar) against the village council president. Divya (Mishti Chakravarty) is the daughter of a union minister (Sayaji Shinde) and has nightmares leading to her waking up screaming and sweating every night. The minister arrives in Sarabha's village to consult his guru and get his daughter treated. She stays back at Parvathamma's house for the duration of her "treatment".

What no one knows is that she has been chosen as the final sacrifice for Chandraksha's son Raktaksha (Charandeep Surneni), who has repeated the procedure of sacrifice his father went through and now wants to bring back his father to realize his dream. Oh, yes, Sarabha is supposed to be the saviour in all of this.

Only, it does not appear like even the writers of Sarabha knew how they would get Sarabha to save the world. He doesn't even have much to do throughout the movie. The script looks like a badly-put-together jigsaw puzzle - the devotion-defeats-evil trope has usually been a crowd-puller, and its usage here shows how it's possible to mess up against pretty sizeable odds pretty easily.

Indeed, watching Sarabha is an ordeal. You would think that a movie based mostly on the occult would show a different way of executing it. Instead, what you get is a lot of "Om Aim Hreem Kleem", darkness and spirits swooshing in and out of people and gurgling like they have the worst sore throats, and silly situations that tumble over one another. Two years of effort should translate better on screen - all they give you is a massive train wreck.

Sarabha was touted to be Jaya Prada's second innings in acting. She is an actress who oozes charm on and off screen, and makes the most of her screen time. But though her performance bumps up the rating a bit, there's still that old-style melodramatic emoting that flows through her blood. She snaps her head up at one point, looking like a parody of an Ekta Kapoor heroine.

Aakash Kumar Sehdev and Mishti Chakravarty make their debuts in Sarabha, and it is immediately obvious that they are simply not ready. The rest of the supporting cast, including Napoleon and Nassar as Sarabha's father and uncle respectively, are underused. It is grossly unfair how some amazing actors are rendered hammy and crassly comic.

The music is disappointing, and just another addition to the long list of things that went wrong in the execution of this movie. The CGI, however, is embarrassingly bad in some places and unbelievably good in some others. The makeup department deserves a shout out, though. Be it the evil Chandraksha or the transformation of the humans who are possessed by the three demons of Chanda Bhairavi, it's all well done and scary enough in places.

It should be clear after everything above - even if you are a fan of anything supernatural or occult, stay away from this one. It's unnecessarily hyped and you'll be thoroughly disappointed.
Share. Save. Connect.
Tweet
SHARABHA SNAPSHOT 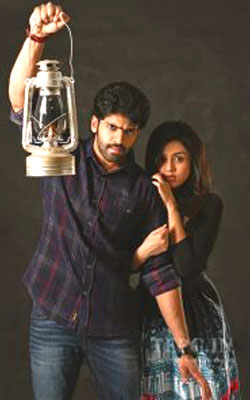 ADVERTISEMENT
This page was tagged for
sharabha film:raktaksha
Sharabha telugu movie
Sharabha reviews
release date
Aakash Kumar Sehdev, Mishti Chakravarty
Follow @fullhyderabad
Follow fullhyd.com on
About Hyderabad
The Hyderabad Community
Improve fullhyd.com
More
Our Other Local Guides
Our other sites
© Copyright 1999-2009 LRR Technologies (Hyderabad), Pvt Ltd. All rights reserved. fullhyd, fullhyderabad, Welcome To The Neighbourhood are trademarks of LRR Technologies (Hyderabad) Pvt Ltd. The textual, graphic, audio and audiovisual material in this site is protected by copyright law. You may not copy, distribute, or use this material except as necessary for your personal, non-commercial use. Any trademarks are the properties of their respective owners. More on Hyderabad, India. Jobs in Hyderabad.