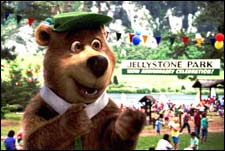 Nupur Barua / fullhyd.com
EDITOR RATING
6.0
Performances
Script
Music/Soundtrack
Visuals
7.0
5.0
5.0
5.0
Suggestions
Can watch again
Yes
Good for kids
Yes
Good for dates
Yes
Wait to rent it
Yes
Two talking bears, a second-generation forest ranger, an ambitious but harmless trainee ranger, an evil mayor, his smart and idiotic right-hand man, and a feather-brained documentary film maker - these are the characters who hold the fate of Jellystone Park in their hands. This is the world of Yogi Bear.

Hanna-Barberaâ€™s creation has come a long way since he first appeared as a supporting character in a show in the late 1950s. The Yogi Bear Show has always been extremely popular with children of all ages. Now, in Yogi Bear, the chatty bear is presented with the intention of bringing back simplicity to kids of the present generation, all brought up on a steady diet of Play Station and dubious ethics.

Ranger Smith (Tom Cavanagh) loves Jellystone Park, despite Yogi (Dan Aykroyd) and Boo Boo (Justin Timberlake) and their impulsive pic-a-nic-basket-stealing. Just beyond this idyllic setting lies a city that is bankrupt, and a mayor (Andrew Daly) who wants to be a governor with some clever scheming by his assistant (Nathan Corddry).

The mayor hatches a plot to rezone Jellystone Park, for his personal profit. The good guys, namely Ranger Smith, Yogi, Boo Boo and Rachel (Anna Faris) must try to stop the mayor before he destroys nature. What none of them realises is that there is a secret element in their lives, a key that can make things right, right under their noses.

The story is straightforward, in keeping with the tradition of the animation shows of yore. It is the screenplay that needs some tightening. The predicaments are predictable, as are the means to overcome hurdles. No innovation there, although maybe that was the intent of the film-makers. It is not a preachy tale, but a thinly-veiled comment on what happens when you mess with the environment.

The movie is a treat for the funny bone - the humour is clean, and Yogiâ€™s misplaced sense of self-esteem ("Iâ€™m smarter than the average bear") makes you smile indulgently. His catch phrases work, and so does the awed look that Boo Boo has whenever he looks at Yogi. They are friends who live together in a cave, and Boo Boo, despite his size, does his best to prevent his friend from straying. Yogiâ€™s constant hunger, his various bungles in the jungle, and his unwillingness to hibernate (much to the ire of the ranger) make him as lovable as he was more than 5 decades ago.

Dan Aykroyd and Justin Timberlake, as the voices of Yogi and Boo Boo, respectively, do the best they can, and the output is quite excellent. Ranger Smith looks too old for the adventure-hungry Rachel (Anna Faris MUST do something about her Scary Movie expressions), but their pairing is not so far-fetched.

It is Daly as the villain who takes the cake, and the cherry on top. Neither does he have a horrendous physical appearance, nor does he cackle with evil laughter, but any child will identify him as the antagonist. He excels in the scenes where he is fed up with automated car windows.

Nathan Corddry as the conniving assistant with a fondness for cotton candy is convincing, and so is TJ Miller as the motivated young ranger who is willing to sell his reluctant soul to the villain for a promotion.

While the CGI figures of Yogi and Boo Boo blend seamlessly into the live action footage, there seems to be a disconnect between the humans and the bears when they speak with each other. Cavanagh is always looking at some spot beyond Yogi, in most of the conversations between the two. Ditto for Faris, but she looks somewhere else in all her movies, so it may be just a coincidence.

Eric Brevig could have done a lot more for visual appeal, considering that he shot the movie mostly in the picturesque countryside of New Zealand. The locations were not exploited enough. Yogiâ€™s cave was a masterpiece, and his ridiculous contraptions were a delight.

So go for Yogi Bear with your kids, discard the critic in you, and laugh like a child while watching the world's favourite talking bear.
Share. Save. Connect.
Tweet
YOGI BEAR SNAPSHOT

ADVERTISEMENT
This page was tagged for
Yogi Bear english movie
Yogi Bear reviews
release date
Dan Aykroyd, Justin Timberlake
theatres list
Follow @fullhyderabad
Follow fullhyd.com on
About Hyderabad
The Hyderabad Community
Improve fullhyd.com
More
Our Other Local Guides
Our other sites
© Copyright 1999-2009 LRR Technologies (Hyderabad), Pvt Ltd. All rights reserved. fullhyd, fullhyderabad, Welcome To The Neighbourhood are trademarks of LRR Technologies (Hyderabad) Pvt Ltd. The textual, graphic, audio and audiovisual material in this site is protected by copyright law. You may not copy, distribute, or use this material except as necessary for your personal, non-commercial use. Any trademarks are the properties of their respective owners. More on Hyderabad, India. Jobs in Hyderabad.