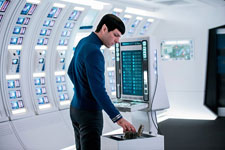 Kritika Deval / fullhyd.com
EDITOR RATING
8.0
Performances
Script
Music/Soundtrack
Visuals
7.5
7.0
8.0
10.0
Suggestions
Can watch again
Yes
Good for kids
Yes
Good for dates
No
Wait for OTT
No
After nine hundred and sixty six days in space, the crew of USS Enterprise, our beloved space-faring pioneers, has gotten into something of a rut. As Captain James T Kirk (Chris Pine) muses, "...things are starting to get episodic". We concur. Kirk is pushing for a promotion, Spock (Zachary Quinto) has relationship troubles, Sulu (John Cho) has a family reunion in the offing, and Scott (Simon Pegg) is busy plugging all the leaks in an ancient stranded space station. The first twenty or so minutes of Star Trek Beyond are pure fanboy and fangirl indulgence. We meet old friends, exchange quips, and find ourselves gradually sliding into the zone, when Kirk and Co's weariness is interrupted by a rescue mission Kirk deems "straightforward". But then, the movie's just begun, and we all know what they say about famous last words, don't we?

The Star Trek universe came into being around half a century back when humanity was just beginning to flirt with such esoteric concepts as equality and peace and justice for all. When Gene Roddenberry came upon the brilliant idea of a Western in the outer space with a multiracial cast back in the '60s, because, you know, aliens don't have to be white, he faced an uphill battle. Today, of course, we're living in a utopia where everybody knows that all people are equal and that the hippies were right about everything. Racism - what's that all about, right?

Well, the depressing tenacity of prejudice and hatred aside, Star Trek is one of those worlds that make you realise that pop culture and real life have a symbiotic relationship. The Original Series used sci-fi to do what sci-fi does best - use the future to explore the ideas of the past and the present. Central to it is a United Nations-like organisation dedicated to maintaining peace in the outer space, with the USS Enterprise as its nexus.

With the exposition out of the way, we can get on with the plot. So, Captain Kirk's "straightforward" rescue mission goes down south really, really fast when Krall (Idris Elba - not that you can actually tell), a cookie-cutter evil, vaguely humanoid alien overlord, ambushes the Enterprise in an effort to get his hands on a bio-weapon. And then we discover that watching our favourite space station disintegrate right in front of our eyes as the crew jumps ship in escape pods is a thing of beauty. One of the reasons why good science fiction can be an almost religious experience is the way it demonstrates the sheer scale of existence. Just as quickly, the whole thing turns into a demonstration of exactly how great Justin Lin is at Schadenfreude.

Star Trek Beyond gives us absolutely nothing new. The plot is a fairly standard Good vs. Evil story where action meets nostalgia. What makes the film live up to its name is how the action soothes that part inside of you that wants to watch ants scramble as their anthill burns down (yes, you too, you hypocritical self-proclaimed peacenik). Very little about this film makes sense in the way you understand sense. The action has all the exuberance of a toddler who's learnt to say "No!". There's a gadget for everything. The characters are their own stereotypes with all the right expressions, moods and lines at all the right places. It's all still an absolute blast because this Star Trek is self-aware. Written by the absolutely hilarious Simon Pegg, this Star Trek knows exactly what it's doing at every moment in time.

Visually thrilling with characters that are as familiar as a dog-eared book, Star Trek Beyond embraces all the retro foibles of its parent series and greets its fans like an old friend. Chris Pine, Simon Pegg and Zachary Quinto all render legendary characters with ease and panache. While Pegg and Quinto play off of each other with ease, Chris Pine imbues his character with a manic energy that's infectious. Idris Elba, though unrecognisable, plays a really, really fun character.

The visuals in this action-packed episode are gorgeous, imbued with an almost shocking profundity for a film that takes itself as lightly as this one does. The music backs up the action seamlessly. The editing is tight, leaving almost no time to think, giving the whole thing a roller-coaster feel.

Whatever else it may or may not be, Star Trek Beyond is fun. And it may not have the forced seriousness of Into Darkness, but it's plenty deep for those who know where to look for the depth. And en fin, it is for fans.
Share. Save. Connect.
Tweet
STAR TREK BEYOND (3D) SNAPSHOT 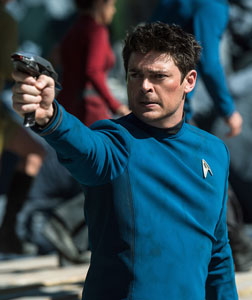 ADVERTISEMENT
This page was tagged for
Star Trek Beyond (3D) english movie
Star Trek Beyond (3D) reviews
release date
Idris Elba, Chris Pine
theatres list
Follow @fullhyderabad
Follow fullhyd.com on
About Hyderabad
The Hyderabad Community
Improve fullhyd.com
More
Our Other Local Guides
Our other sites
© Copyright 1999-2009 LRR Technologies (Hyderabad), Pvt Ltd. All rights reserved. fullhyd, fullhyderabad, Welcome To The Neighbourhood are trademarks of LRR Technologies (Hyderabad) Pvt Ltd. The textual, graphic, audio and audiovisual material in this site is protected by copyright law. You may not copy, distribute, or use this material except as necessary for your personal, non-commercial use. Any trademarks are the properties of their respective owners. More on Hyderabad, India. Jobs in Hyderabad.