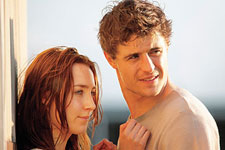 Nupur Barua / fullhyd.com
EDITOR RATING
4.0
Performances
Script
Music/Soundtrack
Visuals
5.0
5.0
4.0
7.0
Suggestions
Can watch again
No
Good for kids
No
Good for dates
Yes
Wait for OTT
No
After moviemakers flocked to her doorstep to buy the rights of her Twilight series, Stephenie Meyer realised that her fan base could extend to adults as well, and therefore wrote The Host. This time, however, she set the youngsters of the story in the future, establishing her credentials as a sci-fi romance author, and, inevitably, a movie version of her book was announced.

So somewhere in the future, Earth has been taken over by peaceful, parasitic aliens. These entities think that human beings do not deserve this rich planet, since they do not know how to preserve it. These aliens are called Souls, and each Soul can be implanted into the body of a human being, or the host.

Eventually, they make the world a beautiful place, but they need to erase the consciousness of every living human before it can become perfect. When a Soul inhabits a human body, the only feature that gives them away are their bluish-gray eyes, with a pupil within a pupil.

Seeker (Diane Kruger) leads a search for some errant humans. They find Melanie Stryder (Saoirse Ronan) in an abandoned hotel. Melanie escapes, by jumping out of the window. Before she can die, however, the Souls implant Wanderer into her body. When she recovers, Wanderer can tell the Seeker where to find the other human beings.

What the Souls do not foresee is the spirit of Melanie. The Wanderer becomes a split personality, torn between her desire to help her own and her pull towards the life that Melanie had. She runs away, and tries to find, with the help of Melanie's constant voice in her head, her brother Jamie (Chandler Canterbury), her boyfriend Jared (Max Irons) and her uncle Jeb (William Hurt).

Once she gets to the caves that the humans hide in, Wanderer is isolated and kept under watch, because they do not trust her, yet.

As she interacts with the humans, Wanderer, now nicknamed Wanda, discovers that she likes them. Despite the initial shunning by Jared, and an attempt by one of the members to kill her, she manages to win their trust. Ian (Jake Abel) falls for Wanda, so now she is at loggerheads with herself, since Melanie's consciousness is still active.

Survival becomes a more important factor, though, and Wanda has to help the humans to not only understand the Souls, but also to return the planet to its rightful owners. The rest of the story is her struggle to get there.

Romance in science fiction does not work unless there is intense passion (think Yargo), and that is sadly lacking in this story. To be fair, this is puppy love, accompanied by a love triangle - being, after all, a Stephenie Meyer story (think Bella, Edward and Jacob). All the characters are dull and in a trance, and it gets monotonous. Also, in typical Meyer style, they do not have shades of grey, making them flat and predictable.

Even if the story were interesting, these characters would have killed it. The fact that the plot itself is not too interesting does not help the movie. There is no dramatic tension, and no highs and lows.

Dialogues are tediously stilted, and delivered without feeling. A pity, really, because it could have been a thought-provoking premise to work on - our Earth taken away from us because we have almost destroyed it. Stephenie Meyer may call it adult fiction, but she is still stuck in her young adult world of silly love stories between humans and supernatural or extra-terrestrial creatures.

Saoirse Ronan is suddenly all grown up, and she is a mature actor. She is better than Jennifer Lawrence, for example, but Hunger Games is a far superior movie. She does her best as Wanda, but cannot hold the movie together.

The boys, Jake Abel and Max Irons, seem largely inspired by the character of Jacob in the Twilight series, and they are not too keen on improving their acting. William Hurt and Francis Fisher are wasted, and Diane Kruger looks plain bored.

The music is nothing to write home about, and the production design is uninspiring. The visualisation of the story is not too well done, and along with poor scripting, makes the movie an experience worth missing out on. Similarly, the costumes look like they have been hastily put together to give us an impression of the future, but they do not seem too practical.

Give The Host a wide berth, and you will thank your stars. If you are a Stephenie Meyer / Twilight fan, you may want to revisit the previous movies, even if you are curious about the new one. Watching it may just make you change your mind about your loyalty to the author and the series - The Host is dull, insipid, uninspiring, and monotonous - do not say you were not warned.
Share. Save. Connect.
Tweet
THE HOST SNAPSHOT 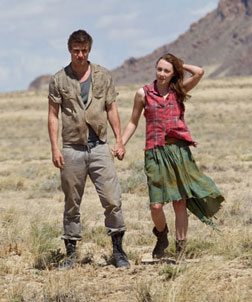 ADVERTISEMENT
This page was tagged for
The Host english movie
The Host reviews
release date
Saoirse Ronan, Jake Abel
theatres list
Follow @fullhyderabad
Follow fullhyd.com on
About Hyderabad
The Hyderabad Community
Improve fullhyd.com
More
Our Other Local Guides
Our other sites
© Copyright 1999-2009 LRR Technologies (Hyderabad), Pvt Ltd. All rights reserved. fullhyd, fullhyderabad, Welcome To The Neighbourhood are trademarks of LRR Technologies (Hyderabad) Pvt Ltd. The textual, graphic, audio and audiovisual material in this site is protected by copyright law. You may not copy, distribute, or use this material except as necessary for your personal, non-commercial use. Any trademarks are the properties of their respective owners. More on Hyderabad, India. Jobs in Hyderabad.