Shor In The City Review 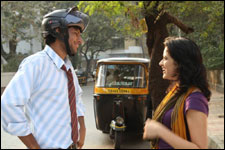 Nupur Barua / fullhyd.com
EDITOR RATING
7.0
Performances
Script
Music/Soundtrack
Visuals
7.0
7.0
6.0
6.0
Suggestions
Can watch again
Yes
Good for kids
Yes
Good for dates
Yes
Wait to rent it
Yes
The director duo of Raj and Krishna has proven true the old adage - content is king. They made a mark with their first Bollywood venture, 99, and with Shor In The City, they are here to stay.

Parallel storylines in a script can be tricky. In Shor In The City, it works. Set in Mumbai, the story moves seamlessly from one track to another, narrating events over a period of 11 days. It begins with the first day of Ganesh Chaturthi, and ends with the nimarjan. The script is a winner, and the execution is near-perfect.

Tilak (Tusshar), Ramesh (Nikhil) and Mandook (newcomer Pitobash) are 3 small-time hooligans, who run a 'publishing' business (read pirated books). When they are not out kidnapping potential authors (to gain first rights to unpublished works), they loiter around picking wallets and bags. Right now, they need a buyer for the guns in a bag they stole on a train.

Tilak is newly-married, and still awkward around his wife Sapna (Radhika). They do not speak much, but details such as the mehendi on her hands, the unpacking of what seem to be wedding gifts, and Sapna's scurry from the bathroom to the bedroom to change clothes, are portrayed beautifully.

Sawan Murthy (Sundeep) is a second-generation Hyderabadi in Mumbai. He is an average cricket batsman, who hopes to get noticed by selectors from the National/State Board. His Gujarati girlfriend, Sejal (Girija), adds to his woes by constantly haranguing him about his lack of commitment. Her parents introduce her to a stream of suitable boys, and she cannot admit to them her relationship with Sawan (or Savvy) unless he does something constructive with his life. Sawan now needs money to bribe his way into the team.

Abhay (Sendhil) is an NRI who has decided to set up a small business in the city. He finds the office space, and a loyal caretaker-cum-watchman. His problems begin when a couple of cold-hearted local goons decide to extort protection money from him. It is only when they accost his girlfriend, Sharmili (Preeti), and later attack his watchman, that Abhay realises they mean business. He has to decide whether he wants to play the meek victim, or take control of his life, and his hard-earned money.

Binding all these characters together, in unconventional ways, is Tipu (Amit), a 'protest-organiser' and middle-man by profession. The three ruffians, as well as Sawan and Abhay, turn to him at different points in their tracks, in times of need. With his vast network and shady dealings, Tipu helps them out to the best of his ability.

Preeti Desai and Radhika Apte do not have much to do in the movie. Girija Oak has a more substantial role as the impatient girlfriend.

Nikhil Dwivedi and Sendhil Ramamurthy play their parts with conviction, as does Zakir Hussain as the unsmiling extortionist. Tusshar Kapoor is good, especially after his over-the-top Golmaal roles. Sundeep Kishan looks promising.

The superlative performers here are Pitobash Tripathy and Amit Mistry. They are the ones who prevent this movie from becoming a dark thriller, and turn it instead into a humane comedy-thriller about ordinary people trying to do something with their lives.

The production design is unremarkable, but the lack of kitsch and bling is welcome. Notably, unlike other movies that use the festival of Ganesh as a backdrop, there is no scene of crowds gathering at Chowpatty to immerse idols, or of random, obsequious devotion. The elephant-god is a benign presence, hovering just where he should - in the background.

The music is definitely worth a listen. And the moral of the story is condensed into one line of a song, 'Karma is a bitch'. Shor In The City is by far the best Balaji presentation till date.
Share. Save. Connect.
Tweet
SHOR IN THE CITY SNAPSHOT

ADVERTISEMENT
This page was tagged for
Shor In The City hindi movie
Shor In The City reviews
release date
Tusshar Kapoor, Sendhil Ramamurthy
theatres list
Follow @fullhyderabad
Follow fullhyd.com on
About Hyderabad
The Hyderabad Community
Improve fullhyd.com
More
Our Other Local Guides
Our other sites
© Copyright 1999-2009 LRR Technologies (Hyderabad), Pvt Ltd. All rights reserved. fullhyd, fullhyderabad, Welcome To The Neighbourhood are trademarks of LRR Technologies (Hyderabad) Pvt Ltd. The textual, graphic, audio and audiovisual material in this site is protected by copyright law. You may not copy, distribute, or use this material except as necessary for your personal, non-commercial use. Any trademarks are the properties of their respective owners. More on Hyderabad, India. Jobs in Hyderabad.