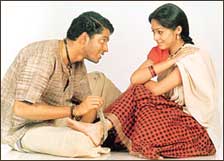 Katyayani (Sada) is the pretty daughter of the village priest and as endearingly naughty as they come. Her draconian father is a severely religious person who is deeply rooted in the caste system and will not tolerate any transgressions. Kats, however, picks Sivudu (Naresh), the low-caste local singer, dancer minstrel, to fall in love with. 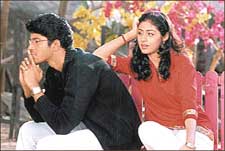 They have just enough time to sing a nice little song together before their love is discovered. After a witch-hunt type chase, they are caught. Asked in the long drawn out panchayat to choose their respective spouses, they decide on death before separation, and are hanged.

Right upto here, which is about an hour, the film is near flawless. With excellent cinematography and music to back it up, it's a sensual treat. But immediately after the hanging starts the struggle. The flame-spirits go to heaven, become stars, come back down to Earth a few years later - the same old corny stuff.

Kasi is an NRI furiously fanning the Indian flame inside him. He comes back from America hoping to make a fusion music album dedicated to his mother. Uma is the sister of a goonda politician, who is being forced to marry a guy against her will. Again, there are all the usual clichés - though Kasi is American, he plays the harmonium, sings bhajans and basically has culture pouring out of any visible orifice. You almost feel like telling him 'take a chill pill, dude!' Uma has her fun outside home, hates politics and guns, but is scared to death of big black bro.

A series of circumstances, which send the movie's credibility meter dropping faster than India's ODI rankings, brings the two together again. They reinvent the meaning of George Michael's "Fast Love", share a look, a few smiles and are in love! Wow... think I'll just run down to Shoppers' Stop or Lifestyle and see if this amazing theory works in real life, too. Anyway, same stuff different life happens, the chase begins, lovers run, ...and end up where? Old village, of course!

The long-pining mother makes a big hue and cry of it all and comes up with a good acting job in the process. Everybody boo-hoos for a bit and it all ends as it must.

Reincarnation movies are, by definition, conceptually flawed. As such they require a certain suspension of disbelief, and directors seem to take this as an excuse to leave 'logic' in the dictionary. Still, it's a commendable effort from first time director Malli. The camerawork is very good, and he shows flashes of talent and perception. Story-wise, however, the transition from that life to this is a little rough.

Naresh needs to learn that acting usually involves some movement of the facial muscles, at least sometimes. He tries, no doubt, but the wooden unshaven look sometimes makes him look like a grinning goof and at other times like a schoolboy who's had his lunch money stolen. Sada is good as usual.

The music and songs deserve special mention - there is an unmistakable energy and conviction about the whole thing. So even though Malli had great support, there's just that little something missing which would make Praanam really good.

ADVERTISEMENT
This page was tagged for
Praanam telugu movie
Praanam reviews
release date
Naresh, Sada
theatres list
Follow @fullhyderabad
Follow fullhyd.com on
About Hyderabad
The Hyderabad Community
Improve fullhyd.com
More
Our Other Local Guides
Our other sites
© Copyright 1999-2009 LRR Technologies (Hyderabad), Pvt Ltd. All rights reserved. fullhyd, fullhyderabad, Welcome To The Neighbourhood are trademarks of LRR Technologies (Hyderabad) Pvt Ltd. The textual, graphic, audio and audiovisual material in this site is protected by copyright law. You may not copy, distribute, or use this material except as necessary for your personal, non-commercial use. Any trademarks are the properties of their respective owners. More on Hyderabad, India. Jobs in Hyderabad.