The Boy Next Door Review 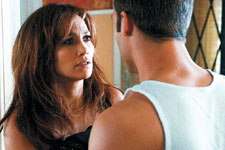 Nupur Barua / fullhyd.com
EDITOR RATING
6.0
Performances
Script
Music/Soundtrack
Visuals
6.0
4.0
5.0
6.0
Suggestions
Can watch again
No
Good for kids
No
Good for dates
Yes
Wait for OTT
No
In his interviews about his latest directorial fare, Rob Cohen very categorically stated that he wants to "reinvent" the erotic thriller genre that was so popular in the 1990s (think Basic Instinct, Fatal Attraction, Cape Fear etc.), but that he wants to make it relevant to this century. The Boy Next Door is his attempt to do just that, and while the plot is pretty much predictable, Cohen, who has directed films such as The Fast And The Furious and The Mummy: Tomb Of The Dragon Emperor, fulfils what he set out to do.

Claire Peterson (Jennifer Lopez) is a teacher in the local high school, in which her teenage son Kevin (Ian Nelson) also studies. She is currently separated from her husband Garrett (John Corbett) because of his infidelity, but they remain of friendly terms, much to the indignation of Claire's best friend Vicky (Kristin Chenoweth), also the Vice Principal of the same school. Claire has not filed for a divorce as yet, because Garrett and she think that there is a chance of reconciliation, mostly for their son.

In the house next door lives an old man, who is about to get a surgery done. His grand-nephew Noah Sandborn (Ryan Guzman) is currently living with him to help him as his caretaker. Noah helps Claire out with her garage door, and it is not long before he becomes a regular visitor at her house. He befriends Kevin, and is charming with Claire's friends. Vicky thinks he is a little strange, but Claire is indulgent, and treats him as a member of the family.

When Garrett and Kevin push off for a camping trip one night, a vulnerable and lonely Claire ends up sleeping with Noah. She immediately regrets it, but Noah has no intentions of terminating the affair. Matters become worse when he threatens her with visual proof of their one-night stand, and it does not help that he is a student in the same school that she teaches in. Her life and her career are both in jeopardy, but she is helpless, and caught in the clutches of a deranged young man.

As far as plot is concerned, this screenplay follows a proper structure. Which makes it predictable, and unexciting. The couple of twists thrown in are expected, and not much of a surprise. The movie is a reminder of the 1990s erotic thrillers, and yes, Cohen does manage to update the setting, but the premise is pretty flimsy. For example, Claire is the adult here, as she admits after she has had sex with the young boy, and she could have handled the situation better. To make her a helpless woman, who is always petrified, seems slightly last century. She indulged in a one night stand before Noah was her student, and there is nothing to be ashamed of, given her marital status. It is unclear why she waited till he became a student to realise that she had breached (when she had not) the ethics that are relevant between a student and a teacher.

There is also no reason for her to not confide in her husband, embarrassment aside. He is not exactly the epitome of fidelity, and their relationship could not be more endangered with this little dalliance. And she went into this with her eyes wide open, given that she had been checking him out through her bedroom window.

Many elements of this thriller are left unexplained. For example, what is the role of the girl named Allie, the one that Kevin wants to date? And what exactly is the problem with Noah? Also, how does his grand uncle not know what he is up to?

The sex scene is intense - Cohen apparently refused to make a PG-13 film. "If you want me," he was quoted on craveonline.com as telling the studio, "I'm making an R-rated movie. I don't want to deal with sex and make it, like, for 13-year-olds." There are also some sexual innuendos in the dialogues, and some nudity otherwise. The movie also ends, as expected, in some blood and gore, and the violence, although not extreme, is pretty unrelenting.

Jennifer Lopez is hot, and does not flaunt it as much as you think she would. She is the perfect choice for this role, and underplays her sensuality with an ease that makes her sexier. She sheds inhibitions, and clothes, for the sex scene. This has to be one of her better performances. Ryan Guzman as the young seducer is suitably manipulative and evil, yet charming and sexy, at least for a high school senior.

Ian Nelson does his bit, and casting John Corbett seems more like a nod to the 1990s than suitability for the character of Claire's husband - the one that she is still pining for. Kristin Chenoweth is slightly irritating, but that is her character, written poorly.

Most of the action is concentrated in the two houses, and in the school. The setting is not too dramatic, and sometimes seems pretty dull. Lopez's costumes seem slightly inappropriate, given her character. The other costumes are average, as are the background score, the cinematography and the editing. In fact, the latter messes up the lovemaking sequence a bit. 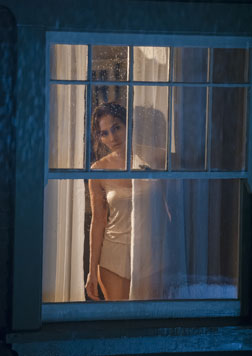 ADVERTISEMENT
This page was tagged for
The Boy Next Door english movie
The Boy Next Door reviews
release date
Jennifer Lopez, Ryan Guzman
theatres list
Follow @fullhyderabad
Follow fullhyd.com on
About Hyderabad
The Hyderabad Community
Improve fullhyd.com
More
Our Other Local Guides
Our other sites
© Copyright 1999-2009 LRR Technologies (Hyderabad), Pvt Ltd. All rights reserved. fullhyd, fullhyderabad, Welcome To The Neighbourhood are trademarks of LRR Technologies (Hyderabad) Pvt Ltd. The textual, graphic, audio and audiovisual material in this site is protected by copyright law. You may not copy, distribute, or use this material except as necessary for your personal, non-commercial use. Any trademarks are the properties of their respective owners. More on Hyderabad, India. Jobs in Hyderabad.