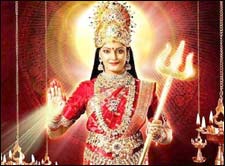 EDITOR RATING
3.0
Performances
Script
Music/Soundtrack
Visuals
NA
NA
NA
NA
Suggestions
Can watch again
NA
Good for kids
NA
Good for dates
NA
Wait for OTT
NA
For those who were born late, this is perhaps as good a time as any to know a little bit about a low-budget, B-grade, tacky film released in 1975 called Jai Santoshi Maa.

A movie made for a very specific targeted audience in parts of Western India, Jai Santoshi Maa became one of the biggest-ever hits of Indian cinema. A little-known goddess became a household name, women all over the country started the solah-shukruvar, the songs sanctified just about every public and private religious occasion (whoever you are, you surely recognize Main To Aarti Utaroon Re Santoshi Maata Ki), and people were even leaving their footwear outside the theaters before entering.

Cut to 2006. Jai Santoshi Maa - 2 is a low-budget, B-grade, tacky film. The question is: is it that the makers of this one know the score better than you and me?

Well, Jai Santoshi Maa needs to depend upon its looks for popularity just as much as God does. The people who enter a theater screening this know exactly what they are going in for, and for most of them, judging the film is not an option - nay, it's actually blasphemy. To a devotee starved for a feel for the Divine, the film is like a meal after a long fast - even something very ordinary tastes very fulfilling.

What explains the rating, then? Well, the number of devotees. 2006 is not 1975. 2006 is not even 1990, when a certain Mahabharata was the biggest show on Indian television. 2006 has hundreds of Hindi channels, but not one mythological serial on any one of them.

The generation that made the original a hit is mostly ensconced in rocking chairs, and the current youth and middle-aged audiences haven't seen God reporting to work, or at least mentioned in sentences with the word "hip" in them. There is too much mileage in an increasingly mediapotent country for agnostic view-points, and everyone's blog seems to have at least one post trying to depict intellectual evolution as being able to differentiate spirituality from religion. And the atheists and agnostics have declared themselves independent.

Like we said, 2006 is different from 1975. Plus, there is the story itself. It looks like a saas-bahu serial made with an extra topping of Gujarati brio. Like in '75, the target audiences seem clearly defined.

Mahima (Nushrat Bharucha) gets married into the family of Anurag (Rakesh Bapat) against the wishes of his foster mother and brothers/sisters-in-law, who then start making life miserable for her. Add to that the fact that Anurag, an aspiring musician, does nothing to bring home the bacon, and she cannot draw on her husband's standing either.

When Anurag is accused of stealing from his own home, he leaves for the city to make it big, and Mahima chooses to stay home to serve her crippled father-in-law. Life becomes much tougher for her, and, a staunch devotee of Santoshi Maa, she starts the solah shukrvar vrat (the 16-Friday fasting ritual). Santoshi Maa is pleased with her steadfast and unflinching faith, and delivers in style towards the end - Anurag clicks in his career, everyone changes for the better, and there's lasting happiness all around.

A simple story of the kind you would have read in "Folk Tales Of Gujarat" when you were 12 years old, with no real-world complications or depth. There are no fundamental questions answered, such as the ones that crop up in your mind when you read about people massacred at places of worship.

The production values show a complete understanding in the makers' mind about what matters in a film like this. There's nobody in the cast that you can recognize, though they all seem to turn in fine performances, especially Nushrat Bharucha. There aren't enough songs with religious fervor unlike in the original, which may work against this.

Unless Santoshi Maa decides to take personal interest - and this time She seems to have an even more uphill task than in 1975 - this one cannot get past 3-4 weeks. Watch it if you need to gain some hope, or see a vision at least on screen.

And if this one makes it to 150 days, don't blame us - we're just human, thinking rationally. We hope She does something about the rest of the world too. Jai Santoshi Maa!
Share. Save. Connect.
Tweet
JAI SANTOSHI MAA SNAPSHOT

ADVERTISEMENT
This page was tagged for
jai santoshi maa the movie
Jai Santoshi Maa
Jai Santoshi Maa hindi movie
Jai Santoshi Maa reviews
release date
Follow @fullhyderabad
Follow fullhyd.com on
About Hyderabad
The Hyderabad Community
Improve fullhyd.com
More
Our Other Local Guides
Our other sites
© Copyright 1999-2009 LRR Technologies (Hyderabad), Pvt Ltd. All rights reserved. fullhyd, fullhyderabad, Welcome To The Neighbourhood are trademarks of LRR Technologies (Hyderabad) Pvt Ltd. The textual, graphic, audio and audiovisual material in this site is protected by copyright law. You may not copy, distribute, or use this material except as necessary for your personal, non-commercial use. Any trademarks are the properties of their respective owners. More on Hyderabad, India. Jobs in Hyderabad.