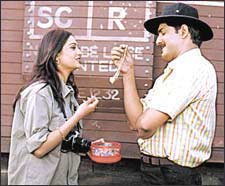 It's amazing how a simple question like "Are you a thief?" can prompt every conceivable type of answer... except a straightforward, honest one. Dongaraamudu and Party also conceive every possible kind of an answer, but that's not the point. The point is that you've got to sit through and watch it while they do.

Ramakrishna (Srikanth) and his sidekicks con unsuspecting dimwits and apparently make a living out of robbing them. Since this is a gang thing, the other rascals play an equal role, and this is where we have to hand it down to the director, Vamsi. He's not the repetitive kinds; he's always different from the last time; he's never the same. The characters, though, will continue to be the same!

Played by familiar faces, the two sidekicks rake up a few seamless chuckles upfront, nonetheless. Ramakrishna and co., notoriously infamous as Dongaraamudu and Party, continue their droll gimmicks on insipid drips, and the reel gallops on. But as the saying goes, 'All that glitters, has a high refractive index', and the sourness in the flick kicks in.

What can a legendary dead man, a village full of adulators, a missing heir to that great man and a con artist hiding from the law, do to make a movie interesting? They can all shut up and let the interval come! But we obviously did not luck-out, and this is what the deal with them is:

Tanikella Bharani, the Circle Inspector, is hot on the trail of Dongaraamudu and Party, and they decide to hide in a village until the heat is off them. This is that same village which is in search for an heir to their legendary, departed godfather. Dongaraamudu pretends to be the inheritor of the great man, managing to gain popularity and, somewhere along the lines, conscience too. Bizarre but true. In a fatal twist, he turns out to become the actual heir to the great man.

An outright comedy needs over-the-top quips in dialogues, and that's an area where Dongaraamudu... lives up to the standards. The vocal parade of the supporting cast is better than a parade by an Iraqi army. In the village where the story unveils are some characters that were created by the god of Telugu comedy, Jandhyala, in his many masterpieces, and some of them have been used in this one to good effect.

The verbal diarrhoea of a stone deaf woman, the cancerous usage of rhyming words in English by a man and a heroine plaguing the songs are minor elements saving the flick from being a total sickness. Laya as the leading lady could have started a fire, started a fight, started a fight over where to start a fire - and still wouldn't get noticed. She's as important to the movie as hair styling gel to Andre Agassi.

Every one involved with Dongaraamudu... is flying high on previous successes. Srikanth on Pellam Oorelithe, Vamsi on Avunu Vaalliddaru... Tanikella Bharani on Oka Raju Oka Rani and the supporting cast on Kabaddi Kabaddi. So the confidence these people ooze is for all to see and perhaps is for all to learn, too.

Being confident about getting lucky is a trademark only of Tollywood. Not to mention Karan Johar, of course. Made by an old school director, this also has a hero bragging about multiple hits and a typical support cast. With all that going for Dongaraamudu..., it is supremely qualified to become...um, nothing!

ADVERTISEMENT
This page was tagged for
Dongaraamudu And Party telugu movie
Dongaraamudu And Party reviews
release date
Srikanth, Laya
theatres list
Follow @fullhyderabad
Follow fullhyd.com on
About Hyderabad
The Hyderabad Community
Improve fullhyd.com
More
Our Other Local Guides
Our other sites
© Copyright 1999-2009 LRR Technologies (Hyderabad), Pvt Ltd. All rights reserved. fullhyd, fullhyderabad, Welcome To The Neighbourhood are trademarks of LRR Technologies (Hyderabad) Pvt Ltd. The textual, graphic, audio and audiovisual material in this site is protected by copyright law. You may not copy, distribute, or use this material except as necessary for your personal, non-commercial use. Any trademarks are the properties of their respective owners. More on Hyderabad, India. Jobs in Hyderabad.