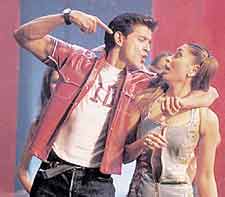 A dude called Molière wrote a play called Cyrano De Bergerac a long time back. It's about a nerd with a big nose who writes like Giacomo Casanova but can't quite pull it off face-to-face. So we have a pretty girl, a handsome friend, impersonation and a lot of jazz. It was made into a movie with the same name with Gerard Depardieu in it, and it was pretty good too. The trick was tried again in "The Truth About Cats And Dogs", and again it worked. It's tried again here by Yash Raj Films, but like they say, "Dig once, you get gold. Dig again, you get gold. Dig a third time and you find yourself in a ditch!" 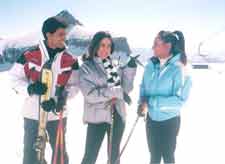 So here we go into the ditch... er... story. Raj (Hrithik Roshan ), Tina (Kareena, taking over the name Rani Mukherjee had in KKHH) and Pooja (Rani Mukherjee) are friends 'cos their respective dads were friends. But Raj was in London for the mandatory 15 years. Meanwhile Raj and Pooja correspond through email (did email exist 15 years ago?) though Pooja took it into her head to write under Tina's name (and id, we presume). They get pretty pally online.

So Raj lands in India, and finds Tina to be a bubbly, kinda dumb-looking, over-enthusiastic and rather off-putting babe. Does he turn on his heels and run? Nah, he promptly falls for her. Can you beat that?

One of those d*** triangles develops. Raj soon comes to know Pooja was using Tina's id, and he reads out section 13 of the Ethics Online handbook, and then tells her she is his true love. That's where the other two movies ended. But then, they had only an hour and a half of reel to fill. 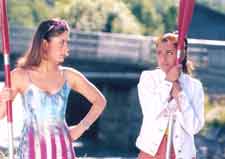 Here Tina's dad expires. So what, you ask? So we have Raj, Pooja and finally Tina playing the Sacrificial Lamb contest - and the audience wins the grand prize. Voila! We have an hour and a half's worth of extra-reel too!

The first half is tolerable if you like the music and can tolerate mushy stuff. But sentimental drama, double entendre dialogues and Uday Chopra follow in a very hard-to-digest second half. And I suspect that the girls who were sitting in front of me boo-hoo-ing were paid by Yash Raj films.

Hrithik Roshan hams a bit in the first half and takes the whole porker after that. He looks like he is gonna have a coronary any moment

when all he has do is look depressed. Kareena seems to have ingested a pogo stick - she's boinging all over the place. Rani Mukherjee does a decent enough job, and should be given a prize for the "Perfect Wistful Expression". The rest of the cast makes for good enough wallpaper.

If you liked DDLJ, DTPH, KKHH, KKKG and the other four-lettered ones, this one will go down well indeed. Three-letter one, though, and you know what they say about three!
Share. Save. Connect.
Tweet
MUJHSE DOSTI KAROGE SNAPSHOT
See Mujhse Dosti Karoge full details
MUJHSE DOSTI KAROGE USER REVIEWS
1 - 13 OF 13 COMMENTS
POSITIVE  |  NEGATIVE |  NEWEST  |  OLDEST  |  MOST HELPFUL  |  LEAST HELPFUL
USER RATING
4.6
40 USERS
Performances
Script
Music/Soundtrack
Visuals
NA
NA
NA
NA
Can watch again - NA
Good for kids - NA
Good for dates - NA
Wait to rent it - NA
Gulab Rai on 28th Jun 2004, 1:37pm | Permalink
rani is the best performance in the mujhse dosti karogay
RATING
10
Fehnaz Hussain on 13th May 2004, 8:39pm | Permalink
i think hirtik was the best he had to go with rani at the the end because she is preety then stupid kareena
RATING
10
Kishore Kumar on 21st Aug 2002, 12:56am | Permalink
This movie should be shown to hrithik himself, and ask one asset of the movie, I bet he wil quit movies... ..
RATING
2
Reema Gopi on 16th Aug 2002, 5:11am | Permalink
Actors like Aksayee Khanna, Saif Ali Khan, Manoj shold be encouged rather than dump Hirthk. Hirthick must be kicked out. He doesn't have acting skills and with his worst dialouge delivery it worrsens badly. Another dump to be kicked out is Abisek.
RATING
2
Kiran Reddy on 15th Aug 2002, 5:08am | Permalink
Even one gives million dollar, don't go to this movie. Don't watch brain eating movies.
RATING
2
Shashidhar Cherukuri on 14th Aug 2002, 11:57pm | Permalink
yash chopra has run out of steam. I rate it as the worst movie ever made under yashraj films.
RATING
2
Jay Tripathi on 14th Aug 2002, 8:56pm | Permalink
Movie is quite simple but had followed the previous Indian movie pattern. The hours are untolerable - JAY
RATING
4
Pol Pot on 12th Aug 2002, 9:23pm | Permalink
This fellow has got only brawn and no brains.
RATING
2
Mohan on 10th Aug 2002, 11:01pm | Permalink
One of the dumbest movies of all time. Wait a minute but it is no dumber than any other hindi movie ;) Well they all suck. I wonder when the Indian movies graduate to the next level. ( Well I mean higher you know).
RATING
2
S S on 10th Aug 2002, 10:04pm | Permalink
Hrithik is a dream ! Excellent all through.
RATING
10
Prakash on 10th Aug 2002, 7:34pm | Permalink
Hritik or Kritik or whatever he is called...its old wine in new bottle...grow up i would say.
RATING
2
Vijaya on 10th Aug 2002, 12:06pm | Permalink
Hrithik u look wonderful in this movie, for u only love stories suites well. All the best, I wish this movie may get u a great success and .... the mouth of people who say one film wounder to u.
RATING
10
Rahul on 10th Aug 2002, 6:58am | Permalink
hrithik is a one film wonder guy.the same old traingular story.dont waste your money on this movie.
RATING
2
LEAVE A COMMENT
fullhyd.com has 700,000+ monthly visits. Tell Hyderabad what you feel about Mujhse Dosti Karoge!
MORE MOVIES
Latest Reviews
Satyameva Jayate 2
Ghostbusters: Afterlife
Eternals
Eternals (Telugu)
Eternals (Hindi)
more
Dune
Venom: Let There Be Carnage
No Time To Die - Telugu
No Time To Die - Hindi
No Time To Die
SR Kalyana Mandapam
Ippudu Kaaka Inkeppudu
Thimmarusu
Kadhanika
Shukra
Contemporary Reviews
Jai Santoshi Maa
Budget Padmanabham
Praanam
Dongaraamudu And Party
Ek Ajnabee
more
Aithe
Hum Kisise Kum Nahin
Oka Raju Oka Rani
Ninne Premista
Once Upon A Time In Mexico
Out Of Control
Hawa
Ammayilu Abbayilu
Ishq Vishq
Random Reviews
Karobaar
Hum Dum
Thammudu
Amma Naanna O Tamila Ammayi
Satyam
more
Kal Kissne Dekha
Don Seenu
Conan The Barbarian
Shirin Farhad Ki Toh Nikal P...
Kick-Ass 2
Transformers: Age Of Extinct...
Bajrangi Bhaijaan
Nenu Local
Jurassic World: Fallen Kingd...
Good Newwz
SEARCH MOVIES
Dissatisfied with the results? Report a problem or error, or add a listing.
ADVERTISEMENT
SHOUTBOX!
{{todo.name}}
{{todo.date}}
[
ip{{todo.ip}}
]
{{ todo.summary }}... expand »
{{ todo.text }} « collapse
First  |  Prev  |   1   2  3  {{current_page-1}}  {{current_page}}  {{current_page+1}}  {{last_page-2}}  {{last_page-1}}  {{last_page}}   |  Next  |  Last
{{todos[0].name}}