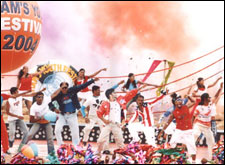 EDITOR RATING
5.0
Performances
Script
Music/Soundtrack
Visuals
NA
NA
NA
NA
Suggestions
Can watch again
NA
Good for kids
NA
Good for dates
NA
Wait to rent it
NA
It can be a really exhilarating experience to have a whale of a time clapping, whistling and dancing in joy the aisles in a movie theater, and then finally walking out in complete satisfaction. And if all of this is after the movie has started, you will even look normal. Maasu Maata Vinadu will certainly not have you clapping, whistling and dancing in joy in the aisles when you're watching it, but that is a small price to pay for the fact that it doesn't make you do it after it is over.

Venu (Navdeep) is such a pointless guy, you're wondering why he was created. But that doesn't stop him from going right ahead and falling in love with Anu (Ankita). Upon realizing that she studies in Gitam at Vizag, he travels there with a bunch of friends who are only slightly more useful than doorknobs with no doors attached to them.

Anu is organizing the big 15-day Gitam inter-collegiate youth festival, and Venu confidently turns his charm on in full flow to impress and woo her. A minute later, he and everyone in the audience realize he has to be serious and try something sensible. So he starts taunting her and trying to act smartass, forgetting that that kind of thing works only in the movies. This doesn't deliver either, and so he participates in a boxing match - and gets mauled. This is when the theater puts up a slide asking for vehicle number AP9 AC8212 to be moved from near the entrance as it is blocking the path for people going out.

The same guy who gets mauled in a boxing match beats up 5 goons and finally wins Anu's heart. Searching for logic in Manasu Maata Vinadu's script is like searching for God - you have to have enormous faith that it is there, even when people around you are suffering in untold agony and your fortitude is put through test after gruesome test. Anyway, what happens now is an unexpected twist - this is because people have stopped expecting anything from this one by now.

It so happens that Arun (Sandeep), a champion athlete and co-student of Anu, is also deeply in love with Anu, and is extremely happy when he finds out that Venu and Anu are an item now. If you read that again, good, that was a test to see if you're still with us. No, he is not happy at all. The rest of the film is about how he creates a rift between the two, how Venu learns Hockey and defeats Arun, a champion at it, in 3 days, and how the movie once again ends in time.

A college romance over an inter-collegiate festival can make for a beautiful script, but needs a high degree of creativity and conceptualization. There is nothing subtle or credible about Manasu Maata Vinadu, and it does not get interesting very often. Navdeep is a miscast in that role primarily due to his build, though he can get some life into the character. Ankita is good-looking, and does fine in a role that offers little potential for excellence. Most performances are fine, and the title song is pretty well-done.

Not worth a watch unless you are not going to see the movie.
Share. Save. Connect.
Tweet
MANASU MAATAVINADU SNAPSHOT

ADVERTISEMENT
This page was tagged for
Manasu maatavinadu serials
manasu maata vinadu serial original name
Manasu Maatavinadu telugu movie
Manasu Maatavinadu reviews
release date
Follow @fullhyderabad
Follow fullhyd.com on
About Hyderabad
The Hyderabad Community
Improve fullhyd.com
More
Our Other Local Guides
Our other sites
© Copyright 1999-2009 LRR Technologies (Hyderabad), Pvt Ltd. All rights reserved. fullhyd, fullhyderabad, Welcome To The Neighbourhood are trademarks of LRR Technologies (Hyderabad) Pvt Ltd. The textual, graphic, audio and audiovisual material in this site is protected by copyright law. You may not copy, distribute, or use this material except as necessary for your personal, non-commercial use. Any trademarks are the properties of their respective owners. More on Hyderabad, India. Jobs in Hyderabad.