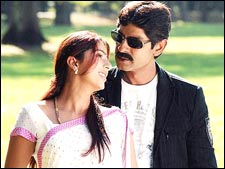 Those who remember a yesteryear hero called Sobhan Babu will also be aware of that unobtrusive niche in Telugu cinema - stories around a married hero. Jagapati is now a gleeful choice among producers to fill in the gap - he may not altogether be in the league of Sobhan Babu where pure histrionics are concerned, but like Kamna Jethmalani gushed uninhibitedly in Samanyudu's Veedu Yama Hottura Babu, he is total husband material on the Tollywood screen.

Swagatham cements Jagapati's saleability in the genre further, given that it is pretty watchable. Yes, you figure out in the first 15 minutes that the script was, er, inspired in no small measure by Kal Ho Na Ho, and lose respect a bit further when R P Patnaik takes credit for a track that is basically Caravan's Piya Tu Ab To Aaja with lyrics translated, but the film has a surprisingly good second half that salvages your reputation for your taste. Even if it is again reminiscent of Evandoi Srivaru, it satisfies a base need in you - to get entertained.

Shailaja (Anushka) is a young lady staying in New York, and in all sorts of trouble in her life - her shop is closing down for lack of money to pay off the loan, her brother-in-law Srikanth (Arjun) has deserted his kid who she is bringing up after the death of her sister, she has to work weekends too, and she cannot see light at the end of the tunnel even if it is flood-lit.

Into her morose life comes Krishna (Jagapati), starting a rival store right opposite hers. He puts her unsolicited fundas on how to see the things in life that she is not able to find, and she predictably tells him to go to places she cannot find. However a forced period of time together brings her close to him, and when he shows her how she misjudged Srikanth, she falls in love with him. Unfortunately, she realizes he is already married.

The second half of the film, featuring the romance with Vidya (Bhoomika), is seriously better than the first thanks to good writing - the first half merely shows what Kal Ho Na Ho would have been without Shah Rukh Khan in it. There's been a shortage of good romances in Telugu for a really long time, and the second half is a welcome whiff.

Jagapati does what he always does, whatever that means to you. Anushka too does what she always does, which is less ambiguous - she sheds clothes. Sure, she can emote, but that seems to be an add-on. Indeed, there was no need to make the songs with her as raunchy as this one does in a film clearly aimed at family and female audiences. Bhoomika does her usual elegant job. There is a comic track that does not really match the average Tollywood standards, though Ravi Babu plays a gay with, er, abandon.

Swagatham is worth a watch if you don't cry too much - there's plenty of senti stuff as the film tries to end dignifiedly. If you do cry too much, well, we don't know a solution to that, and neither does this film.
Share. Save. Connect.
Tweet
SWAGATHAM SNAPSHOT

ADVERTISEMENT
This page was tagged for
Swagatham Telugu
Swagatham telugu movie
Swagatham reviews
release date
Jagapati Babu, Bhoomika
Follow @fullhyderabad
Follow fullhyd.com on
About Hyderabad
The Hyderabad Community
Improve fullhyd.com
More
Our Other Local Guides
Our other sites
© Copyright 1999-2009 LRR Technologies (Hyderabad), Pvt Ltd. All rights reserved. fullhyd, fullhyderabad, Welcome To The Neighbourhood are trademarks of LRR Technologies (Hyderabad) Pvt Ltd. The textual, graphic, audio and audiovisual material in this site is protected by copyright law. You may not copy, distribute, or use this material except as necessary for your personal, non-commercial use. Any trademarks are the properties of their respective owners. More on Hyderabad, India. Jobs in Hyderabad.