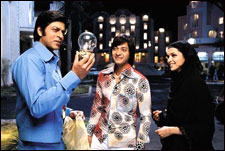 Ravi Mundoli / fullhyd.com
EDITOR RATING
7.5
Performances
Script
Music/Soundtrack
Visuals
NA
NA
NA
NA
Suggestions
Can watch again
NA
Good for kids
NA
Good for dates
NA
Wait to rent it
NA
Buried somewhere inside the gob-smacking mayhem that is Om Shanti Om, there is surely a message of some kind. It might be that Shah Rukh Khan, The Outsider, is cocking a snook at the First Families of Bollywood. It might be that Farah Khan is cocking a snook at everyone who attempts a serious film in Bollywood. It might even be that reincarnation is a necessary precondition for 6-pack abs, so you might as well chuck that gym membership.

To put it in Om Kapoor's words, who gives a fish? What is of cardinal importance is that if you love Bollywood spectacle (aka kitsch in the Ray-Roy-Dutt fan circles), with its emotions, dramas and tragedies, you will hugely enjoy OSO. One litmus test would be to see if you got all the Bollywood references in that last sentence.

Om Prakash Makhija (SRK) is a junior artiste in '70s Bombay filmdom, and dreams about making it big in the Industry. When he's not engaged in daydreaming about his date with destiny in the company of his buddy Pappu (Shreyas Talpade), he is besotted with Shantipriya (Deepika Padukone), an up-and-coming starlet.

When there is a fire accident on set, Om rescues Shanti, and they begin to get to know each other. While all this is happening, lurking ominously in the background is Mukesh Mehra (Arjun Rampal), a crooked producer in whose mega-project (named Om Shanti Om!) Shanti is to star.

While Om flits around trying to woo Shanti, all is not as it appears between her and Mukesh. There is something black in the lentils. Since everyone and his penfriend in Timbuktu knows about it already, we will let slip that Om dies thanks to Mukesh's shenanigans, and that he is reincarnated after the interval as the son of Bollywood's "yesteryears" hero Rajesh Kapoor (Jawed Sheikh).

Anyway, all this is utterly beside the point. OSO is as much about plot and story as Anna Kournikova is about tennis. Suffice it to say that much of the second half involves Om (the reincarnation) trying to frame Mukesh by implementing an algorithm that was probably first designed by one William Shakespeare for Hamlet and later fine-tuned for Bollywood by Subhash Ghai in Karz.

OSO is a boatload of shovel-popcorn-into-mouth-in-bucketfuls fun. Lots and lots of very funny Bollywood references, outrageous costumes, and just sheer fun. Did we say that a second time? Well, the movie is about reincarnation...

SRK basically does what SRK does best, and OSO might as well have been named Ham Shanti Ham. Except for a few bits in his Om avatar where he doesn't really fit into the '70s milieu, he's on cruise control.

Shreyas Talpade is good as the buddy, but Kirron Kher as Om's mother Bela is side-splitting. A lowly junior artiste who missed the clarion call of history (i. e. K Asif's invitation to be the lead in Mughal-e-Azam) because she was pregnant with Om, she oscillates brilliantly between being an over-the-top Bollywood maa with full rona dhona and simply being a mother worried about her son.

The find of OSO, of course, is Deepika Padukone. As a '70s film star, she manages to be radiant and luminous in the way only those ladies were. In the second half, as a modern day, gum-chewing, star-worshipping, slightly vacuous brat, she makes you forget all about the candlepower from the first half. More power to her.

But what is really the icing on the cake, is that OSO holds up a mirror in front of Bollywood, and God bless their supposedly Olympian egos, they laugh at themselves. The tongue-firmly-entrenched-in-cheek Filmfare Awards sequence is what people will remember the most about OSO, and the main cast of the movie is hardly even present. That, and the 31 stars Bollywood-ek-badaa-parivaar-sukhi-parivaar song will fill you with the sort of warm and fuzzy feelings that were last seen in the John Jaani Janardhan timeframe.

For what it's worth, there is probably a subtext to OSO. Om Prakash Makhija, the son of junior artistes, is hardworking, dedicated and many other good adjectives, but doesn't stand a chance in the industry. But essentially the same chap, as Om Kapoor, son of Rajesh Kapoor, becomes a superstar, simply because he has the right surname.

Om Shanti Om is mostly loads of fun in a featherweight, pink candy floss, deposit-your-brains-in-the-cloak-room-before-entering-the-theater kind of way. It does slacken pace in places, and appears to lose its way a couple of times, but redeems itself in the end. If you're into the Main Hoon Na school of filmmaking, and are prepared to watch a movie that doesn't take itself or Bollywood too seriously, you have yourself the perfect Deepavali flick.
Share. Save. Connect.
Tweet
OM SHANTI OM SNAPSHOT

See Om Shanti Om full details
OM SHANTI OM USER REVIEWS
1 - 15 OF 16 COMMENTS  |  NEXT  |  LAST
POSITIVE  |  NEGATIVE |  NEWEST  |  OLDEST  |  MOST HELPFUL  |  LEAST HELPFUL
USER RATING
7.4
174 USERS
Performances
Script
Music/Soundtrack
Visuals
NA
NA
NA
NA
Can watch again - NA
Good for kids - NA
Good for dates - NA
Wait to rent it - NA
its_vinay on 4th Aug 2008, 9:50pm | Permalink
Deepika...awesome...The main asset of the movie is the first half and Deepika.I will give 9/10 for the first half but the second half is a night mare just 1/10.I dont know who has given the idea of six packs to Sharukh...Sharukhji please keep out of this type of ideas which are not matching to you.You can sit in the second half only for Deepika...she steals my heart.She looks georgous in the whole film.
Totally its an avg movie...you can watch once....
Njoy....

Sharukh khan was T-E-R-R-I-B-LE. Talks too much in the second half ...

ADVERTISEMENT
This page was tagged for
Om Shanti Om hindi movie
Om Shanti Om reviews
release date
Shah Rukh Khan, Deepika Padukone
theatres list
Follow @fullhyderabad
Follow fullhyd.com on
About Hyderabad
The Hyderabad Community
Improve fullhyd.com
More
Our Other Local Guides
Our other sites
© Copyright 1999-2009 LRR Technologies (Hyderabad), Pvt Ltd. All rights reserved. fullhyd, fullhyderabad, Welcome To The Neighbourhood are trademarks of LRR Technologies (Hyderabad) Pvt Ltd. The textual, graphic, audio and audiovisual material in this site is protected by copyright law. You may not copy, distribute, or use this material except as necessary for your personal, non-commercial use. Any trademarks are the properties of their respective owners. More on Hyderabad, India. Jobs in Hyderabad.