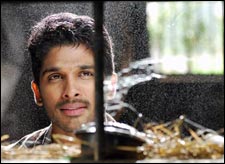 EDITOR RATING
6.0
Performances
Script
Music/Soundtrack
Visuals
8.5
5.0
7.0
8.0
Suggestions
Can watch again
No
Good for kids
Yes
Good for dates
Yes
Wait to rent it
Unsure
We all know it - the true test of a director whose first film is a runaway success, is the second. It's one thing to perform a labour of love for a dream film that you've been thinking of for years before you actually entered the industry, and another to be a professional movie-maker who has to routinely come up with ideas keeping in mind what the masses seem to currently want, and work with the burdens of big money riding on him and high expectations.

It's of course too early to judge in this case, but Bhasker's second cannot hold a candle to his first.

Parugu is certainly a different movie, with a theme you're unlikely to have seen before, but, of course, it's neither necessary nor sufficient to be different to get success, at least in Tollywood.

Then, Parugu is still a movie about misguided parenthood, and that somehow appears to be a wrong lesson inferred from the success of Bommarillu.

Bommarillu would have perhaps worked just as fine if that element of obsessive parenthood were replaced by mere parental antipathy for love. The film was mostly about a brilliant role for, and execution by, Genelia, and romance. Sure, several educated and open-minded parents identified with the movie's moral, but they'd have watched the film anyway without all that - but take Genelia's role and the romance out, and the film would've been very ordinary.

Parugu's main problem, in a nutshell, is that - zero romance. Which results in a movie with no compelling theme - also, if you're going to project a movie as a romance, and that's not the ultimate payoff, people are going to walk out dissatisfied.

There also doesn't seem to be enough of the Allu Arjun payoff. Easily Tollywood's most charismatic and alluring hero in the younger brigade, he somehow doesn't seem to be as much there and as much in control as you'd want. There's lesser machismo, and there's lesser success - the girl doesn't fall for him until the last half hour of a 165-minute movie.

Plus, Prakash Raj's character. But more of that later.

Krishna (Allu Arjun) helps the daughter Subbalakshmi (Poonam Bajwa) of a powerful village paterfamilias Neelakantha (Prakash Raj) elope, and the latter's henchmen then get him and his friends to the village and imprison them in the latter's outhouse to get them to help find her.

Krishna falls in love with a girl he sees just before he is captured, but does not know she is Meena (Sheela), the second daughter of Neelakantha. He decides to stay imprisoned until he discovers her, so that he can hunt for her in the village.

The first half goes in the attempts to discover her, and while it has the standard Telugu film comedy you'd expect, especially of a movie featuring Allu Arjun, it takes up too many reels. Which is incidentally is a big problem with the film - it's slow.

The second half rambles on, ostensibly to depict Krishna courting Meena and turning moral, but in reality rambling on. The movie takes its time about itself, and Bhaskar loses the plot in the last half-hour. Mostly with Neelakantha.

The character of Neelakantha is perhaps the most important in Parugu, and Bhasker tries to model it around that of the father of Bommarillu. Only, it cannot go much beyond a silouette, and the parts don't all fit together into logical behaviour by a person. For example, Neelakantha seems to have wisened up when his first daughter tells him to leave her alone, but still insists on getting Meena married against her wishes, and for no apparent reason. And it's hard to see a person depicted as justly as he is, being so violent with young men without proof of any complicity.

Then, the climax has both Prakash Raj and Allu Arjun trying to communicate without talking, but frankly, neither of them is up to it. But perhaps that has less to do with their emoting prowess, and more to do with the conceptualization itself. You could ask why Krishna can't say what he wants to, much earlier than he actually does. You had no questions to ask at the end in Bommarillu.

Parugu still comes with a message, and that is that children should be seen as gifts, not as rights. Indeed, we have children for our happiness and fulfilment, and not to do any unborn people any favours, and so it is unjustified to think they owe us anything. However, the message is lost in a movie that cannot stick together as one unit.

Arjun is as good as the role will allow him. Sheela doesn't perhaps look like a girl who someone would fall in love with at first sight and then stick to despite all her rebukes, but she does pretty fine, and would perhaps have been even better if there were some actual romance in the film. Jayasudha in a brief role does well, too, and Prakash Raj could have excelled with a better scripted role. The songs by Mani Sharma are the kind that will do well if the film itself does well.

Parugu has its moments, and is worth a watch if you are willing to pardon everything else.
Share. Save. Connect.
Tweet
PARUGU SNAPSHOT


Pros: U rating for the movie, its a rarity these days.
Cons: everything else.

RATING
4
Inturu Krishna on 5th May 2008, 9:25am | Permalink
Its really a good flick for the moviegoers
RATING
9
Krishna on 2nd May 2008, 9:52pm | Permalink
Average fare. Arjun's electrifying dance moves seem a bit subdued in Parugu.

That guy that everyone in Andhra knows as "Prakash Raj"? His name is "Prakash Rai" ... like "Aishwarya Rai". For heaven's sake, give him some credit ...

ADVERTISEMENT
This page was tagged for
Movie relz
Movie relz parugu
Parugu volga movie
Paragu movie climax 10 minit download
????? ???? ??????
Follow @fullhyderabad
Follow fullhyd.com on
About Hyderabad
The Hyderabad Community
Improve fullhyd.com
More
Our Other Local Guides
Our other sites
© Copyright 1999-2009 LRR Technologies (Hyderabad), Pvt Ltd. All rights reserved. fullhyd, fullhyderabad, Welcome To The Neighbourhood are trademarks of LRR Technologies (Hyderabad) Pvt Ltd. The textual, graphic, audio and audiovisual material in this site is protected by copyright law. You may not copy, distribute, or use this material except as necessary for your personal, non-commercial use. Any trademarks are the properties of their respective owners. More on Hyderabad, India. Jobs in Hyderabad.