Moviemakers aren't the imbecile drips anymore. They're now aware of the modish fads, can trap the pulse of the junta and feed their psyche. "Do you see the glass half empty or half full? What's the taste of your Ugaadi pachchadi, sweet or bitter?" Depending on your valuable answer, the moviemakers, or for that matter anyone, will decide whether all your senses are working properly or not. This might also help in dubiously deciding whether you'd love this masala candy called Simhadri or not.

Simhadri (an unchanged NTR, despite the entire hula about his fitness regime) is (but wait, maybe the fitness regime HAS worked - his belt size is still only termed as 'the tropic of cancer') a (in case you got mixed up in these parentheses, the last three words were 'Simhadri is a') caretaker loved enough by his moneyed master (Nazir) to consider adopting him as a son. 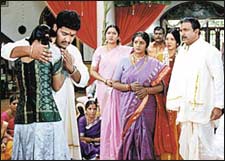 Looking at the first few frames, it's hard to shake-off similarities to Sneham Kosam that had the master-servant schtick to eternity. But that one was all class and this is all not - a lion's share materializing in the form of Kasturi (Ankita). She has certainly 'grown' prominently from being that 'I love you Rasna' kid. Now, if only her clothes had also grown...

Simhadri is taking full advantage of this situation and is also taking full care of Indu (Bhoomika) for she is somewhat, let's say, mentally immature. Now there's this issue of mental immaturity that most of the cerebral people fathom to be contradictory. Isn't it every man's dream to get back to his lovely childhood? Where everyday is all play and no work? Being mentally immature then becomes a dream come true. My point here being that if given a chance, I know at least I would try, to divert the topic of discussion when it's just a wet blanket. The topic of discussion being that the story is not only a wet blanket here, but an old one at that. 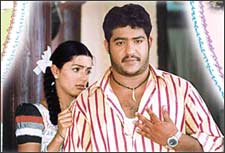 Touches of Simhadri being a fierce 'Singhamalai' are sprinkled randomly, and voila, this is that genre of movies that accepts Basha as the messiah. When Simhadri lands in Kerala to unite an estranged daughter (Sita) with her father (his master), he's caught in the malignant web of anarchy, dictated by Bhai (Mukesh Rishi). He's left with no choice but to fight for the liberation of the suffering people there. Sometimes even chop, cut, axe and hatchet for them.

Having relieved them thus, he returns to his quiet routine of slaving. But as fate would have it, not to mention the 'inspired' script, his past catches up on him and he's forced once again to become the bloodthirsty 'Singhamalai' for one last time.

Bhoomika again manages to pounce upon a role in a movie with incredible potential to becoming another Okkadu or another Vasu. She owes one big time to her shrewd agent.

The movie has gory violence, but in this case it's rousing like in Narasimha Naidu, because of a genuine reason attached to the bloodshed and it not being some fancy-factionist-fun. Jr NTR has certainly announced himself on the big league with this one, although he'd still get the status of a rookie. This movie has all the elements needed by the frontbenchers to find themselves in the theater again and again. Let's just see if they do.
Share. Save. Connect.
Tweet
SIMHADRI SNAPSHOT
See Simhadri full details
TOP COMMENT
Varun M on 22nd Oct 2007, 2:24am | Permalink
Splendid action by NTR. No doubt it is the best Mass movie in telugu. Kudos to Rajamouli. The Singhamali episode is very good.

We in Ontario (Canada) are disappointed. We request others to go through this movie before commenting on it

ADVERTISEMENT
This page was tagged for
simhadri movie hd images
simhadri telugu review
simhadri full movie
simhadri movie review
Simhadri telugu movie
Follow @fullhyderabad
Follow fullhyd.com on
About Hyderabad
The Hyderabad Community
Improve fullhyd.com
More
Our Other Local Guides
Our other sites
© Copyright 1999-2009 LRR Technologies (Hyderabad), Pvt Ltd. All rights reserved. fullhyd, fullhyderabad, Welcome To The Neighbourhood are trademarks of LRR Technologies (Hyderabad) Pvt Ltd. The textual, graphic, audio and audiovisual material in this site is protected by copyright law. You may not copy, distribute, or use this material except as necessary for your personal, non-commercial use. Any trademarks are the properties of their respective owners. More on Hyderabad, India. Jobs in Hyderabad.