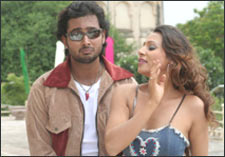 Krishna KBS / fullhyd.com
EDITOR RATING
1.0
Performances
Script
Music/Soundtrack
Visuals
NA
NA
NA
NA
Suggestions
Can watch again
NA
Good for kids
NA
Good for dates
NA
Wait to rent it
NA
There is very little you can say about a film like Lakshmi Putrudu - for one thing, there isn't much to say, and secondly, it's better to say nothing when there isn't anything good to say. Probably that is a bit too uncharitable, but frankly, trying to find something to like in this movie is like groping in the dark for a 5 paisa coin that you know you have dropped but for the heck of it can't remember where.

Lakshmi Putrudu is another foolish choice on the part of Uday Kiran. The film suffers from poor script, poor screenplay, poor acting, poor direction, poor editing... you get the point. The story is new, leading you to pose the question: if a story or a movie has novelty, is it a good thing or a bad thing? There must be some reason why no one has attempted such a story before.

Anyway, Prabhakar (Uday Kiran) is, as an astrologer tells you at the beginning of the movie, someone who either gets into trouble wherever he goes, or creates trouble if he finds there is none in the place where he is. That is not such a good thing to do if you want to survive in the real world; but luckily, he doesn't exist in the real world.

One such activity on his part leads to Shweta (Diya), who happens to be the younger sister of Police Commissioner Ravi Chandran, falling in love with him. She coerces him to reciprocate her love, and the methods that she chooses to force him to do her bidding are better not spoken about on a public forum. After the usual opposition from the trigger-happy brother, their "love" is blessed.

All this is over in the first 40 minutes of the film, and we look forward to the real story unfolding on the screen. This is a major mistake - as you soon find out that if the first 40 minutes were like being in the frying pan, the rest just throws you into the fire, and with no extinguisher.

Prabhakar finds out that his father isn't a psychiatrist but a patient (Satyaraj) in the hospital run by his adopted dad. He tries to figure out how his dad became mad; though as the date of his real dad becoming mad coincides with his being born, the mystery is perhaps self-revealing.

The director spends the rest of the reels trying to figure out the mystery, and bringing in political intrigue and whatnot. Raj Kapoor tries to enliven the proceedings by showing insanity as comedy, which gives an idea as to the EQ and the IQ of the director, and the expected EQ and IQ of the viewer.

Brahmanandam does a poor job of a parody of Rajnikanth's Sivaji. Uday Kiran acts the best in the film, and guess that says more about how the others act. There are a few deep lines in the movie, but they are so few that it is not worth wasting (as spending is a word that can't be used in this context) your money, time, or energy, on this film.
Share. Save. Connect.
Tweet
LAKSHMI PUTRUDU SNAPSHOT

ADVERTISEMENT
This page was tagged for
Lakshmi Putrudu telugu movie
Lakshmi Putrudu reviews
release date
Uday Kiran, Diya
theatres list
Follow @fullhyderabad
Follow fullhyd.com on
About Hyderabad
The Hyderabad Community
Improve fullhyd.com
More
Our Other Local Guides
Our other sites
© Copyright 1999-2009 LRR Technologies (Hyderabad), Pvt Ltd. All rights reserved. fullhyd, fullhyderabad, Welcome To The Neighbourhood are trademarks of LRR Technologies (Hyderabad) Pvt Ltd. The textual, graphic, audio and audiovisual material in this site is protected by copyright law. You may not copy, distribute, or use this material except as necessary for your personal, non-commercial use. Any trademarks are the properties of their respective owners. More on Hyderabad, India. Jobs in Hyderabad.