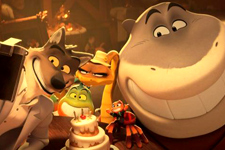 Punarvasu Pendse / fullhyd.com
EDITOR RATING
6.5
Performances
Script
Music/Soundtrack
Visuals
9.0
5.0
8.0
7.0
Suggestions
Can watch again
Yes
Good for kids
Yes
Good for dates
No
Wait for OTT
No
Bad Guys opens with a scene that you've probably seen before in plenty of action/heist/gangster movies - two suave guys amusing you with their witty banter, in a good-natured give-and-take that seems genuine and natural. Then they go rob a bank.

Oh, and did we tell you that the "guys" are a wolf and a snake? All of this one continuous shot - well, it is an animated movie, so guess we can say it appears to be one continuous shot, at the very least. It is kind of cool to see techniques that we have been used to seeing in more "serious" (the beginning of Quentin Tarantino's Pulp Fiction comes to mind) film-making, in an animated comedy film for kids.

Debutant director Pierre Perifel serves up an offering that aims to replicate the "warm fuzzy feeling" mentioned by Mr. Wolf in the movie, and please both children and adults while at it. And it seems like he succeeds, for the most part - The Bad Guys is light-hearted and fun, and while it can certainly be accused of going ham with its message, it sticks to its principle of "give people a second chance" with conviction.

After a heist goes awry, the smooth-talking Mr. Wolf gets his band a get-out-of-jail card that hinges upon the Bad Guys going good. But is that all part of a grand, over-arching master plan that you would expect from a group calling itself the Bad Guys, or is there more to it than meets the eye?

The Bad Guys is a lavishly animated and vibrant movie that is earnest but also doesn't take itself very seriously at the same time. At its heart is an age-old tale of morality - do bad people deserve a second chance, and can people truly ever change for good. Deliver that in a package for kids - complete with fart jokes and arguments on whether a meteorite looks like a heart or a butt - and you have a recipe for a good time. While not particularly original or innovative, the script is light and breezy, and has enough substance to it that adults can enjoy it. Kids, of course, will have a rollicking good time.

Not everything is perfect, though, as the film takes place in a weird semi-hybrid world where some animals are anthropomorphic and have an equal place in society as humans, while others are pets who don't get to speak - and some species have both characteristics - which might be confusing to the film's younger audience. Meanwhile, some of the older audiences might feel jaded by the amount of throwbacks and references this movie makes to other heist films - Mr. Wolf is literally compared to George Clooney (and few will dispute that the Ocean's series is perhaps the most influential heist film series ever made - with Clooney portraying the titular Danny Ocean) at a point.

The Bad Guys has a terrific cast, led by Sam Rockwell's "smooth criminal" (voice) act. Rockwell's attitude translates into a voiceover performance, and even Mr. Wolf's dance mannerisms mirror some of the cool moves Rockwell busted in his movies in the past. Marc Manon's guarded performance suits the cautious Mr. Snake very well, and his rapport with Rockwell leads to some fantastic sequences.

Awkwafina is loud, bordering on obnoxious, which is hilarious considering Ms. Tarantula is the smallest member of the Bad Guys and her delivery of punchlines is amongst the most solid in this film. Craig Robinson steals the show as the sensitive Mr. Shark, and goes with the running gag of the largest guy in the group being in charge of disguises with full conviction (his greatest trick is stealing the Mona Lisa disguised as the Mona Lisa, who thinks of this stuff haha).

Anthony Ramos' Mr. Piranha is perhaps the one weakly written character in the movie, and it shows. Rounding up the cast is Zazie Beetz who is fantastic as foxy governor Diane Foxington, and Richard Ayoade who is amusing as the do-gooder Professor Marmalade.

Daniel Pemberton's score is quite easily among the best we have experienced in an animated movie. Utilising soft jazz, rock, hip hop, electronic music and a variety of other styles, Pemberton creates a soundtrack that complements the visuals admirably. With plenty of original compositions interspersed with bangers like "Howlin' For You" by The Black Keys and "Brand New Day" by The Heavy, Pemberton endeavours to create a memorable auditory experience, and boy does he succeed. Hell, even the trailers feature iconic songs like "Bad Guy" by Billie Eilish and "Bad Boy For Life" by P. Diddy. Honestly, the music for the chase scene early on in the movie made yours truly scour the interwebs for its source - and the song is "Stop Drop Roll" by a hitherto obscure band called Can't Stop Won't Stop, a fact that we think will change in the future (the track will be likeable even for those not fans of hip hop, and a definite earworm in the best way possible).

If slapstick, albeit very polished slapstick, is your thing, The Bad Guys is a fun way to spend an afternoon or evening even if you don't have kids or younger siblings. If you do, take them regardless, because they will surely thank you for it (or will have fun, at least). 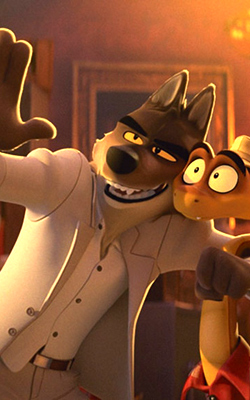 ADVERTISEMENT
This page was tagged for
The Bad Guys english movie
The Bad Guys reviews
release date
Sam Rockwell, Marc Maron
theatres list
Follow @fullhyderabad
Follow fullhyd.com on
About Hyderabad
The Hyderabad Community
Improve fullhyd.com
More
Our Other Local Guides
Our other sites
© Copyright 1999-2009 LRR Technologies (Hyderabad), Pvt Ltd. All rights reserved. fullhyd, fullhyderabad, Welcome To The Neighbourhood are trademarks of LRR Technologies (Hyderabad) Pvt Ltd. The textual, graphic, audio and audiovisual material in this site is protected by copyright law. You may not copy, distribute, or use this material except as necessary for your personal, non-commercial use. Any trademarks are the properties of their respective owners. More on Hyderabad, India. Jobs in Hyderabad.