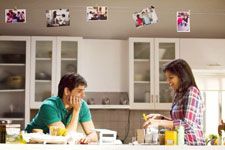 Nupur Barua / fullhyd.com
EDITOR RATING
6.0
Performances
Script
Music/Soundtrack
Visuals
7.0
6.0
5.0
7.0
Suggestions
Can watch again
Yes
Good for kids
No
Good for dates
Yes
Wait for OTT
Yes
What is love, in Hindi movies? Chemical locha? Lust? Running around trees? Intense intellectual connection? Janam janam ka saath? We have seen all of these and more over a century of love stories, but we never tire of flocking to the theatres for yet another love story, and once in a while, an unconventional tale of romance is a welcome relief, as well as a curiosity. Which is why there is a buzz around the latest offering by the unusual collaboration between Karan Johar and Anurag Kashyap as producers - Hasee Toh Phasee.

In Mumbai, a young man named Nikhil (Siddharth Malhotra), attends a wedding with his cousin. When he sees a Harry Potter-esque tomboyish girl struggling in an evident attempt to run away, he helps her to an auto rickshaw. The short conversation between them leads him to believe that he has met somebody worth pursuing, but he is immediately distracted by the bride's sister, Karishma (Adah Sharma), whom he eventually woos.

And seven years later, Karishma and Nikhil are engaged. She is a television actor, and he is struggling with his event management company. The wedding draws near, and Nikhil's relatives now converge in Mumbai. This is when Karishma reveals that her runaway sister, Meeta (Parineeti Chopra), missing for seven years, is back, and needs a place to stay, since she cannot reunite with her family immediately - she gave her father a heart attack when she ran away with his money.

Meeta is strange, a pill popper, an established thief, and a geek. She also has some shady Chinese connection, having stayed in China all this while. As Nikhil tries to balance his time between wedding preparations and an investor for his business proposition, he finds himself thrown together with Meeta more and more often - usually in an effort to prevent her family from recognising her. His life becomes more complicated when he discovers that he is attracted to her, but he does not know quite what to do.

As far as screenplays go, this one drags in the first half. The writer spends too much time establishing the setting, and then repeating it. The fact that a triangle is inevitable is obvious, but it is hammered into your head over and over again. The Chinese problem is hinted at, but never explained to your satisfaction.

The basic flaw in the writing is the characterisation. Meeta is not "normal", yes, but the makers seem to lose either courage or conviction to make her completely quirky. Her sudden bursts of normalcy are jarring, and it looks like the director does not want to experiment too much with the idea of the unconventional leading lady. Pity, because it would have made Meeta a more believable character had he let her loose.

Karishma yo-yos between bitchy, spoilt girlfriend and understanding lover, and thus evokes neither sympathy nor apathy. Nikhil is portrayed as the good guy, but the story begins with the idea that both Nikhil and Meeta are misfits in their own families, so his attempt at being the almost-successful son is confusing. The relationship between Nikhil and his father could have been explored a bit in detail.

The romance is not passionate enough, and sometimes too jaded for you to invest in the story of the unlikely pair. A sudden confrontational scene between the lead actors makes no sense therefore, since there is nothing that leads up to it. It looks like the director and the writer were both unwilling to go the extra mile to make the love story a really unusual one, and therefore decided to stick within acceptable parameters of what romance should be.

There is enough humour in the story, so the additional scene regarding a missing necklace and the subsequent investigation drags a little, especially when there is no resolution. The dialogues oscillate between delightful and mundane, but the overall result is an entertaining watch, with a smattering of emotion thrown in to re-engage your senses, in case you get too detached from the story.

A few peripheral characters firmly root the story in reality - especially the man who keeps asking everybody how they are, every time, and says nothing else, and the groom's cousin who wants to be an Indian "i-doll".

The production design is effective - not too loud, and not too subtle. The costumes are apt, although one would have expected to see a variety in sarees, considering one of the characters is a saree king, of sorts. The cinematography captures certain nuances of Mumbai, and does an exceptionally good job with the rains. The editing becomes erratic towards the second half, and sometimes scenes just end without reason - or maybe it just seems that way because the first half is slower.

The music is disappointing, making its way into the story at the most unwanted places, except for the song, Shake It Like Shammi.

Siddharth Malhotra, for somebody who is just one film old, is confident. He lacks the intensity that his character needed, but he is a good-looking boy, and watching him is a visual treat.

Parineeti Chopra, also known as the female Emraan Hashmi for that one mandatory kiss in every film, may get a little repetitive in her choice of roles. This was one film where she could have broken out of her mould, but she slips back too easily and too often into any of the other characters that she has played so far. Otherwise, she is a fantastic actor.

Anil Mange as the singing cousin provides welcome comic relief. Adah Sharma deserved a more rounded role, given her talent. Neena Kulkarni, Sameer Khakkar and Sharat Saxena are wasted - they are delightful in their respective roles, but they deserved more screen time. Manoj Joshi as Meeta's father has solid impact, underplaying the character (which is most unlike him).

Tone down the expectations that you may have from Hasee Toh Phasee, and you will love the movie. We are going through turbulent times, where Hindi movies are experimenting with various characters and storylines, and the makers do not always get it right, but one can always appreciate the effort. This is one movie that does not seem too forced, and is an entertainer (which is what matters, at the end of it all).
Share. Save. Connect.
Tweet
HASEE TOH PHASEE SNAPSHOT 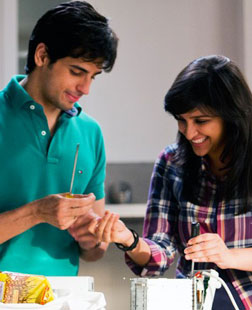 ADVERTISEMENT
This page was tagged for
hasee toh phasee movie kickassgolkes
hasee toh phasee the movie
hasee toh phasee movie
hasee to phasee 480p movies
Hasee Toh Phasee hindi movie
Follow @fullhyderabad
Follow fullhyd.com on
About Hyderabad
The Hyderabad Community
Improve fullhyd.com
More
Our Other Local Guides
Our other sites
© Copyright 1999-2009 LRR Technologies (Hyderabad), Pvt Ltd. All rights reserved. fullhyd, fullhyderabad, Welcome To The Neighbourhood are trademarks of LRR Technologies (Hyderabad) Pvt Ltd. The textual, graphic, audio and audiovisual material in this site is protected by copyright law. You may not copy, distribute, or use this material except as necessary for your personal, non-commercial use. Any trademarks are the properties of their respective owners. More on Hyderabad, India. Jobs in Hyderabad.