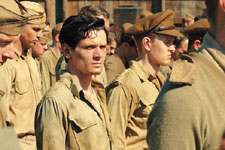 Nupur Barua / fullhyd.com
EDITOR RATING
5.0
Performances
Script
Music/Soundtrack
Visuals
6.0
4.0
5.0
7.0
Suggestions
Can watch again
No
Good for kids
No
Good for dates
No
Wait for OTT
Yes
The theatrical trailer of Unbroken has garnered quite a few hits on YouTube. The initial impression is that it is the story of a man who, like Forrest Gump, overcomes all odds to lead a normal life. Add to that the fact that it is directed by Angelina Jolie, and you have a winner in terms of curiousity aroused. A winner at the box office? Well, maybe not.

In simple words, Unbroken is the story of a ruffian named Louis Zamperini (C J Valleroy), who is always up to some mischief or the other in the sleepy town of Torrance, California. He is the bane of his Italian immigrant parents, and only his older brother Pete (Alex Russell) sees some spark in him. Pete trains him to run track, and before you know it, Louis (Jack O'Connell) becomes the Torrance Tornado and participates in the 1936 Olympics in Berlin, Germany. A few years later, he is a bombardier of the United States Army Air Forces, and that is when life changes for the happy-go-lucky young man.

During a rescue mission, the plane that Louis is in crashes into the ocean, and only three survive, including Zamperini and the pilot Phil (Domnhall Gleeson). As they float on a raft in the shark-infested waters for 47 days, the third survivor, Mac (Finn Wittrock), dies of starvation and weakness. Just when the other two think that they are fated to die, too, they are captured by the Japanese and sent to a prisoner-of-war camp.

Phil and Louis are ultimately separated, and the latter is fated to spend two years in a facility run by the very weird Watanabe (Miyavi), who hates Zamperini with a vengeance. Zamperini's defiance and determination is what the rest of the movie is all about.

Intriguing as it sounds, the story does not translate quite so well as a script. The Coen Brothers may have written the screenplay basing it on Lauren Hillenbrand's book "Unbroken: A World War II Story of Survival, Resilience, And Redemption", but it lacks depth and emotion. The director spends plenty of time building Zamperini's character and emphasises on the camaraderie he shares with his fellow officers. The story then moves to a flashback of his childhood, and most of the first half follows this pattern of present day - flashback - present day. However, the narration is rather superficial. Other characters, such as Louis's parents and brother, are established, too, but their internal relationships are glossed over; although the director does give some importance to the relationship between Pete and Louis. There is no connection between the various aspects of Zamperini's life - how he went into the army, how he qualified for the Olympics etc. - and the result is a jerky montage of his life.

The portion in which Zamperini is adrift in a raft comprises a series of melancholic dialogues and expressions, and lacks drama, despite an air attack and the threat of the sharks. When the story finally shifts to the war camps, the director plays with the dynamics between the athlete and Watanabe. Again, everything is on the surface, and there is no delving into the psychology behind either Watanabe's sadism or Zamperini's resilience. The lack of plot points and the disregard for emotions leaves you feeling unsatisfied by the time the movie is over.

Angelina Jolie makes Unbroken a cliché, and it can get pretty tiring. We have had our share of war movies, and since this is no ordinary story, a few unconventional shots or dialogues would have made it a more interesting film. The movie begins with a terrific sequence of a 1943 bombing mission, but that's almost about it. The film ends abruptly, and the footnotes tell us about what happened to some of the characters after the war. While you respect the creative call the director takes to decide the final sequence of the film, you cannot help wondering if it would have made for better watching had the story extended to the athlete's later years, in which he makes peace with himself and his tormentors.

Jack O'Connell is a decent actor, and he is present in almost every frame of the movie. However, you cannot root for his character for too long, because the actor himself seems quite indifferent to the situations that his character finds himself in. He is too smug at times, which has more to do with the direction than his acting. Miyavi is suitably evil, but his character is quite flat. The only other two actors who make an impression are Domnhall Gleeson and Alex Russell. Garrett Hedland makes an impact, too.

The production design is suitable for the story, but not so great either. Since the film does not specify dates and we are supposed to guess the period based on the historical events playing out in the background, you tend to overlook any discrepancy in the authenticity of the sets and costumes. The music is also quite mundane, and the movie is a little too long for a story does not say more about Zamperini than you could read on Wikipedia.

Then again, the movie has its heart in the right place, and it is a story worth telling. Louis Zamperini is not an unsung hero - in fact, he is pretty well-known in the United States - but the new generation need to revisit their history, too. Zamperini deserves a better movie, though.

Watch this one for the events that transpired in those times. Japan has, in the meantime, asked for a ban on the movie because it feels that its people have been portrayed as stereotypical villains. That is reason enough to watch this one.
Share. Save. Connect.
Tweet
UNBROKEN SNAPSHOT 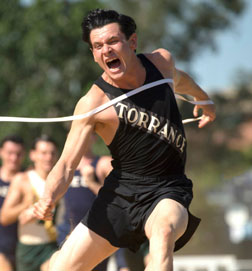 ADVERTISEMENT
This page was tagged for
Unbroken english movie
Unbroken reviews
release date
Matthew Crocker, Jack O'Connell
theatres list
Follow @fullhyderabad
Follow fullhyd.com on
About Hyderabad
The Hyderabad Community
Improve fullhyd.com
More
Our Other Local Guides
Our other sites
© Copyright 1999-2009 LRR Technologies (Hyderabad), Pvt Ltd. All rights reserved. fullhyd, fullhyderabad, Welcome To The Neighbourhood are trademarks of LRR Technologies (Hyderabad) Pvt Ltd. The textual, graphic, audio and audiovisual material in this site is protected by copyright law. You may not copy, distribute, or use this material except as necessary for your personal, non-commercial use. Any trademarks are the properties of their respective owners. More on Hyderabad, India. Jobs in Hyderabad.