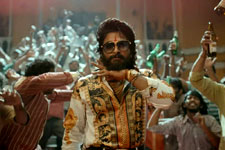 T J Reddy / fullhyd.com
EDITOR RATING
5.5
Performances
Script
Music/Soundtrack
Visuals
7.0
4.0
4.0
8.0
Suggestions
Can watch again
No
Good for kids
No
Good for dates
Yes
Wait to rent it
No
Sukumar is one of Telugu cinema's finest minds. His films have always had a special place in my heart. While they are never perfect, they are always interesting. His characters and worlds encourage an audience to absorb fresh perspectives.

The locale chosen for his newest foray is the Seshachalam forest. And the character whose perspective we see the world from is Keshava.

Keshava narrates the story of Pushparaju alias Pushpa (Allu Arjun), a daily labourer with an attitude and a chip on his shoulder the size of one of the sacred seven hills. Pushpa works a small-time job but has lofty ambitions. A conduit for those ambitions comes through Konda Reddy, his brothers, and their red sandalwood smuggling operation.

Sukumar uses a three-hour runtime to chronicle the rise of Pushpa from a meagre logger to the head of the smuggling syndicate. But the million-rupee question is, did this half of the story need three hours?

Sukumar wastes no time introducing us to the world, his main character, and the goals of the movie he's making. The first half is jam-packed with clever characterization, subversive "mass" moments, and a relentless pace that has no time for breathers of any sort. To quote Pushpa himself, "Taggedele." This half has a beginning, middle and end. It has a well-defined protagonist, a handful of fantastic set-pieces, and a sensible antagonist in our anti-hero's way. The first half is a deftly-made short film that is good fun for the family.

However, lest we forget, Sukumar doesn't make perfect films; he makes intriguing ones. With Pushpa, he places three first acts after a third act.

We believe that Sukumar may be the kind of father who trolls his children by adding a few extra pieces into their jigsaw puzzles. These pieces are shiny and fun, and attract attention. As you find yourself enamoured by the individual bits, you come to realize that no one knows or understands where they fit as a part of the whole.

The second half of Pushpa is akin to that of Dear Comrade in that it is a whole lot of uninteresting setup with minimal payoff. This half feels like an exercise in tedium because we have three new inciting incidents post the two-hour mark. Around the time these incidents lead into full-blown plot points, we find ourselves at the end of the movie without a sense of climactic catharsis or the sheer exuberance of waiting for the payoff to a cliffhanger.

Indeed, Pushpa gives you everything but the kitchen sink. KGF: Chapter 1 and Baahubali: The Beginning frontloaded their stories with plot points and finished off with epic climactic sequences for this reason. Wow, an audience with the third act, and all your issues don't matter.

Speaking of issues, Pushparaju might very well be the most thinly-written main character in Sukumar's filmography. Pushpa is an antihero, anti-failure, and anti-learning things throughout his life. He dropped his slate and chalk when he was nothing more than a nipper, and never looked back. He knew everything he'd need to know to rule the world from that point on. Until Fahadh Fasil's S P Shekawat enters the fray, Pushpa finds himself utterly schooling a bombastic band of burly baddies with no stakes or danger attached. His antics are eminently watchable, but Pushpa the person is wholly forgettable.

Allu Arjun's performance infuses so much life into the proceedings that it is near impossible to imagine a less capable performer in the role. His presence is so assured that the mannerisms and dialect tuck away behind his raw intensity and sheer magnetism. While the two Aryas illustrated Sukumar's capabilities of propping up a limited actor, Pushpa is Allu Arjun returning the favour in spades. By comparison, Rashmika Mandanna's performance does little to bring her weirdly-written character to life. Sukumar regulars Ajay Ghosh, Sunil, Anasuya Bharadwaj and a host of others do well in their roles.

Speaking of Sukumar regulars, DSP's score and songs are not on par with the scale and score of the film. A distinct feeling of "this is not going on my playlist" permeates the soundscape.

Sukumar's directing has improved leaps and bounds. While the glory scenes of large-scale action and the impressive set design might take home the praise, we have different favourites. Simple shots such as capturing a conversation between two lovers in a car look interesting by the power of framing alone. The candid nature of the camerawork makes it look more like a viewer peeping into a personal moment than a shot constructed for a film.

And that is what makes wholly trashing a movie like Pushpa impossible. There is so much craftsmanship displayed when making the film. It is a damn shame that the same amount of craft is near invisible in its conceptual stages. The experience of watching Pushpa is similar to going on a date with an attractive, intelligent and successful person who has nothing of interest to offer to an evening of conversation. You might be impressed with yourself for landing the date; however, you soon realize that this will be the beginning and the end of the impressive bits.

If this review feels bland, we don't have words of glowing praise or outright resentment towards this movie. It is hard to sink your teeth into something when the bone has no edible flesh on it. Sukumar will get a chance to make a second first impression sooner rather than later. We hope we enjoy our second date rather than being indifferent about it. 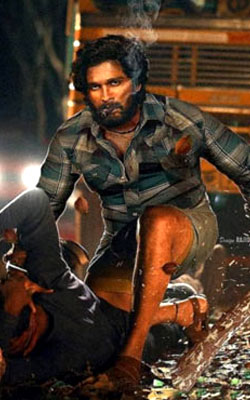 Considering Sukumar, I would rate script as 1. Story is poorly written and the priorities are badly focused.

They wasted lot of stuff on telling people which they already know like uses/demand for sandalwood.

In one scene while the hero is looking for work, he come to know that there are two types of jobs - one pays RS100 and other risky one pay RS1000 - and our hero choose the risky one as he is brave. This writing looked silly to me, I mean hero is staying in a village close to forest, he is rebel and care free, how he did not know that this kind of business happens in their village.

Lastly, transporting the sandalwood in rivers is very well known and was repeated in lot of movies earlier. The writer wants us to appreciate the hero just because he used this technique.

They did not put enough efforts in writing or showing things newly, rather they showed all known stuff with great production values and some good performances.

ADVERTISEMENT
This page was tagged for
Pushpa: The Rise telugu movie
Pushpa: The Rise reviews
release date
Allu Arjun, Fahadh Faasil
theatres list
Follow @fullhyderabad
Follow fullhyd.com on
About Hyderabad
The Hyderabad Community
Improve fullhyd.com
More
Our Other Local Guides
Our other sites
© Copyright 1999-2009 LRR Technologies (Hyderabad), Pvt Ltd. All rights reserved. fullhyd, fullhyderabad, Welcome To The Neighbourhood are trademarks of LRR Technologies (Hyderabad) Pvt Ltd. The textual, graphic, audio and audiovisual material in this site is protected by copyright law. You may not copy, distribute, or use this material except as necessary for your personal, non-commercial use. Any trademarks are the properties of their respective owners. More on Hyderabad, India. Jobs in Hyderabad.