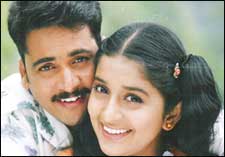 Mithun Verma / fullhyd.com
EDITOR RATING
5.0
Performances
Script
Music/Soundtrack
Visuals
NA
NA
NA
NA
Suggestions
Can watch again
NA
Good for kids
NA
Good for dates
NA
Wait for OTT
NA
One is likely to find some strange creatures on the screen these days. One is likely to find some strange creatures even in the movie that is being played on the screen, once the insects are wiped off it. These strange creatures seem to be appearing in pairs. Identical pairs, that too. First there was the Siamese twins pair in Swami, now the look-alike heroines in this one. Some kind of conspiracy floating around here…

Satya (Meera Jasmine) is a modern girl who's unaware of the fact that Sivaji has crazily fallen for her. Even when she's being asked extremely personal questions on the pretext of a TV show, she behaves calm and composed, doing what a responsible modern girl would do - comb her hair.

Sivaji, who has low opinion on arranged marriages, makes sure that he collects all the things that Satya likes. He would gift them all to her on the day of their marriage. But his parents have other ideas. They force him to see another girl they selected for him. It just turns out that that girl and Satya look the same.

Not believing his luck, Sivaji at once agrees to tie the knot. Now, if you and I were to get married and sing songs in Switzerland with a girl, we would assume that we'd at least know the name of that girl. Or at least know each others' name since both of us are with her.

But you and I are not acting in the movie, so just shut up. If you're marrying a girl, why should you know her name before marriage? Are you going to get it tattooed on your butt or something? Surely you wouldn't be having an arranged marriage if you're that kind. At this end, Sivaji doesn't even bother to find out his girl's name.

Now, it turns out that the girl Sivaji marries is Janani (Meera Jasmine again) and not Satya. Incredibly, both of these girls were not lost in a mela, but still look identical. Coincidentally, Janani moves to a flat opposite to Sivaji and Staya, and Sivaji is crushed between his love and his responsibility i. e. marriage.

The rest of the movie entangles the three in a slippery family drama and finally releases them into their respective justices. In movie psyche, marriage is always greater than love.

The story, 'adapted' from a Tamil movie, keeps us guessing throughout. All the three parties involved seem fair, and we're dying to see how it ends. There's a decent comedy track to keep up the pace, but somehow the movie still lacks the right kind of pace. Real heart-touching scenes seem to be missing.

Performances by Sivaji and Meera are worthy of applause. Bramhanandam and Ali have also given their usual (which is better than most of the lead actors around). Having absolutely no mass appeal might hit the movie bad. Otherwise, this a great attempt at a neat love drama.

And remember, after all the emotional scenes are over, the melodramatic confrontations fizzle out and a happy climax is churned out, you, as a responsible viewer have an important job to do, namely, wake-up from the sleep and go home. So go home.
Share. Save. Connect.
Tweet
AMMAI BAGUNDI SNAPSHOT

ADVERTISEMENT
This page was tagged for
Ammai Bagundi telugu movie
Ammai Bagundi reviews
release date
Sivaji, Meera Jasmin
theatres list
Follow @fullhyderabad
Follow fullhyd.com on
About Hyderabad
The Hyderabad Community
Improve fullhyd.com
More
Our Other Local Guides
Our other sites
© Copyright 1999-2009 LRR Technologies (Hyderabad), Pvt Ltd. All rights reserved. fullhyd, fullhyderabad, Welcome To The Neighbourhood are trademarks of LRR Technologies (Hyderabad) Pvt Ltd. The textual, graphic, audio and audiovisual material in this site is protected by copyright law. You may not copy, distribute, or use this material except as necessary for your personal, non-commercial use. Any trademarks are the properties of their respective owners. More on Hyderabad, India. Jobs in Hyderabad.