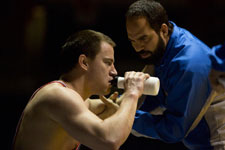 Kritika Deval / fullhyd.com
EDITOR RATING
7.0
Performances
Script
Music/Soundtrack
Visuals
9.5
6.0
8.0
8.0
Suggestions
Can watch again
Yes
Good for kids
No
Good for dates
No
Wait to rent it
No
Most people, when thinking of wrestling, picture the flamboyance and the violence and the all-round absurdity of WWE. So the hypnotic melding of movement portrayed in Foxcatcher, a portrayal of professional wrestling at a national and international level, might come as a bit of a shock to those who, like this author, don't really follow the sport. Director Bennett Miller's vision, which drives all activity in the film, imbues this exceedingly physical sport with a shocking amount of subdued expression.

When Mark Schultz (Channing Tatum) trains with his brother Dave (Mark Ruffalo) after a particularly bruising day, the tenderness with which they draw from each other's strength is palpable. When the brothers begin to wrestle in earnest, every line in Dave's body implies a supplicating strength, while Mark's every movement screams frustrated determination. For all its understated use of dialogue and overt emotion, Foxcatcher's strength lies in its use of movement as its lexicon.

The film is basically a true crime drama outlining a murder that you'll want to look up, but might want to put off until after the movie. It's screenplay is a curious derivative of biography and journalism, which, in its execution, often seems at odds with itself. It details the story of the Schultz brothers who are gold-winning wrestlers, and how the entry of John duPont (Steve Carell), a millionaire with the intention of creating and training a team of world-class American wrestlers, into their life changes it quite irrevocably. The movie talks of Mark's feeling of empty frustration in the face of Dave's familial bliss and stable career, of Dave's struggle with unwillingness to shake up the stability of his life and his desire to be there for his brother, and most importantly, of John duPont and his desperation to seek out a purpose beyond the one that his legacy leaves him with - that of living out a life of luxury in personal anonymity and dynastic conspicuity.

The lives of all three meld when Mark receives a call from duPont asking him to visit his Pennsylvania estate. As duPont outlines his plans to Mark, the latter feels an excitement that has eluded him of late - the excitement for the possibility of personal advancement. He tries to get his brother in on duPont's dream team for the upcoming Seoul Olympics, but Dave hesitates to uproot himself from his home and hearth. Meanwhile at duPont's estate, duPont's attraction for Mark grows, not in the monetary way of wealth and its corresponding privileges, but in the a-sense-of-validation Mark, and his dreams of more.

Mark is fairly straightforward, as is Dave - both are extremely talented, both depend on each other and love each other, yet both struggling for the day their own achievement can be separate from the other's. duPont, on the other hand, is not. He is exhaustingly wealthy from a family legacy of weapons and chemicals. He loves his mother (Vanessa Redgrave), who prefers her horses and disapproves of his involvement in what she feels is a "low sport". duPont is also very obviously creepy. He tries to get an inordinate amount of dominance over those he pays, in this case Mark. He is almost certainly a bit of a nutcase, and the qualifiers exist because you really cannot tell for sure in lieu of relevant activity. He extends every luxury to Mark and later to Dave and his family, while he makes sure that they've all watched tapes on the duPont family. The film is by no means a bundle of joys, but John duPont is the subversive harbinger of all nastiness in Foxcatcher.

Steve Carell's terrifyingly complicated performance is very unsettling, yet effective. He creates duPont's personality from opinion, anecdote, reports and a load of thin air, but once he has a handle on the character, he does not let go. Channing Tatum shows a similar tenacity towards his own character, a belligerent and vulnerable boy-man. Tatum uses his body to tell us things that words can, too, but that his body can better. Mark Ruffalo's Dave Schultz, on the other hand, is a more nuanced yet uniformly benign counterpoint to duPont's inner rot.

Vanessa Redgrave is icy and snobbish and all around great, but doesn't have much to do except to contribute the Oedipal component to her son's Shakespearan catalog of neuroses. Sienna Miller is similarly underutilized, which makes you wonder why someone like her was picked for such an insignificant part in the first place.

Director Bennett Miller's camera is an icy herald, always restless, always harbingering. The music is minimal, the variety of audible tics passed for a background score almost exploitative in their establishment of anxiety. And these absolutes of viewpoints among ambiguous characters are more than a bit difficult to deal with.

Foxcatcher is a great story. It is bizarre, it is interesting, it actually happened and to famous people, and it is acted to perfection. Foxcatcher is also rather confused over whether it wants to observe from a distance or pass premature indictments. This can be jarring to the viewers, to say the least. On the other hand, it is still all of the above.
Share. Save. Connect.
Tweet
FOXCATCHER SNAPSHOT 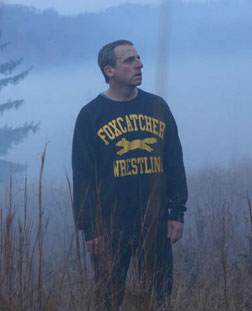 ADVERTISEMENT
This page was tagged for
Foxcatcher english movie
Foxcatcher reviews
release date
Steve Carell, Channing Tatum
theatres list
Follow @fullhyderabad
Follow fullhyd.com on
About Hyderabad
The Hyderabad Community
Improve fullhyd.com
More
Our Other Local Guides
Our other sites
© Copyright 1999-2009 LRR Technologies (Hyderabad), Pvt Ltd. All rights reserved. fullhyd, fullhyderabad, Welcome To The Neighbourhood are trademarks of LRR Technologies (Hyderabad) Pvt Ltd. The textual, graphic, audio and audiovisual material in this site is protected by copyright law. You may not copy, distribute, or use this material except as necessary for your personal, non-commercial use. Any trademarks are the properties of their respective owners. More on Hyderabad, India. Jobs in Hyderabad.