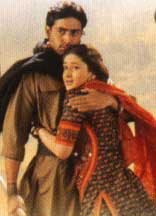 Pratima Agnihotri / fullhyd.com
EDITOR RATING
5.0
Performances
Script
Music/Soundtrack
Visuals
NA
NA
NA
NA
Suggestions
Can watch again
NA
Good for kids
NA
Good for dates
NA
Wait to rent it
NA
The "Refugee" may roam across the border and ferry people across, but for him there is nothing like the sweet home that his chulbuli sweetheart, Nazo, has made for him. Moreover, it is a replica of his small house in a small hamlet back there in India. But can he cross the border? Can, in these days, the home be where the heart is? A central issue to our war-torn world where millions are rendered homeless every minute. Actually, a theme to be dealt with sensitively and delicately, especially in the context of the current Indo-Pak relations.

Given that he made Border, you'd expect J P Dutta to come up with a more perceptive analysis, and raise the standards set by the plethora of movies, like Roja and Maachis that have tried to explore this subject in recent times. Instead, he chooses to make this debut vehicle of Abhishek Bachchan a mix-up of any number of Amitabh hits, with a dash of 1942, A Love Story, Water and what have you.

The plot wanders, literally, across the Indo-Pak border. Thrown in is a romance that is a love-triangle, some talks about patriotism - at times gooey and at times downright comic -, poverty, parental and filial duties and so on. And all this high talk is a rehash of famous scenes from Amitabh hits.

It's hardly a fair debut for Bachchan Jr, who lacks the smoldering fire of early Amitabh or his superb voice, to be put through what is partly a re-work of the Zanjeer theme (a frame-up of an honest guy) and partly a play on the famous "yeh bhai bhai ke beech mein", Deewar motif. We tend to recognize the original and unfavorably compare the poor newcomer.

Abhishek's acting is more in the Shahenshah mode of the later Amitabh movies. There is no trace of the understated, refined acting of Jaya Bhaduri. In fact, he screams so often that even Shroff looks a controlled actor in comparison. Sure, the Amitabh look alike does try, and there is an undeniable promise in certain scenes, especially the way he uses his expressive eyes and facial muscles.

Maybe Abhishek could not do much since his role is not defined and focussed enough. In fact, Dutta is trying to pack too much into too little. Hence, the pace of the movie is very uncertain. It positively drags at places, and except for the first half of the post-interval run, you fervently wish that the editor and the scriptwriter had been more merciful to their story line and to the spectators.

You are expecting a well-defined discussion of the confusion of a young man whose 'profession' of ferrying people across the border gets him into terrorism, unwittingly. And what do you get? A curious hodgepodge of family drama, "garibi se bachao" rhetoric, and army and anti-terrorist propaganda, which is further problematic due to the way that Pakistan and Muslims are projected. In fact, the violence in the film, at the visual as well as the psychological level, is at times downright nauseating.

The romantic angle, on the other hand, is very lyrically presented. Wide angle shots of the wide horizon, the gushing river defining it, provide for a visual feast. Power packed acting, by the beautiful Kareena Kapoor, adds to the tender moments. Backed by a better-scripted characterization and pithy dialogues, Kareena emerges as a true performer. But due to the mature way in which she enacts the naughty, rebellious, firm, loving and determined Nazo, all male leads pale before her.

She is ably helped by a dapper Shetty, a feel-good Shroff, Anupam Kher and many senior artists including Reena Roy. The photography is another plus - be it the wide-angled zoom outs of natural expanses or the picture perfect profiles of Kareena. The music is not much to write home about, and Javed's pen doesn't do justice enough to either the volatile love story or the 'great' patriotic fervor.
Share. Save. Connect.
Tweet
REFUGEE SNAPSHOT

ADVERTISEMENT
This page was tagged for
Refugee hindi movie
Refugee reviews
release date
Jackie Shroff, Sunil Shetty
theatres list
Follow @fullhyderabad
Follow fullhyd.com on
About Hyderabad
The Hyderabad Community
Improve fullhyd.com
More
Our Other Local Guides
Our other sites
© Copyright 1999-2009 LRR Technologies (Hyderabad), Pvt Ltd. All rights reserved. fullhyd, fullhyderabad, Welcome To The Neighbourhood are trademarks of LRR Technologies (Hyderabad) Pvt Ltd. The textual, graphic, audio and audiovisual material in this site is protected by copyright law. You may not copy, distribute, or use this material except as necessary for your personal, non-commercial use. Any trademarks are the properties of their respective owners. More on Hyderabad, India. Jobs in Hyderabad.