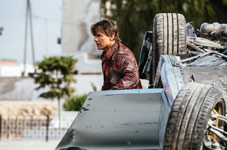 Josh / fullhyd.com
EDITOR RATING
8.0
Performances
Script
Music/Soundtrack
Visuals
8.0
8.0
7.0
8.0
Suggestions
Can watch again
Yes
Good for kids
Yes
Good for dates
Yes
Wait to rent it
No
"This man, Hunt, is the living manifestation of destiny," says the CIA director Alan Hunley (Alec Baldwin) to the British Prime minister during an emergency. For one, it is quite amusing to see a straight-faced Alec Baldwin mouth such a line. But more significantly, this is a very entertaining line which also tells us that this movie is an unapologetic star vehicle whose stated (and achieved) purpose is to entertain the socks off our heels.

MI5 begins with Hunley succeeding in disbanding the "outdated and imperfect" Impossible Mission Force (IMF - we're unsure of how the International Monetary Fund feels about the acronym), much to the dismay of IMF agent William Brandt (Jeremy Renner). What Hunley doesn't succeed at, is tracking down Ethan Hunt.

Hunt has been on the hunt for a secret organisation which goes by the name The Syndicate. But there isn't much evidence of its existence. The CIA believes it's just a figment of Hunt's imagination, and, further, that he's unleashed unnecessary havoc in pursuit of this illusory organisation. Now it is just trying to capture the highly trained and "delusional" IMF agent gone rogue.

What don't go rogue here are the direction and script by Christopher McQuarrie. His work reminds you of how clever action spy thrillers can be. We all know that the impossible missions will be made possible, and often with unrealistic tech and earnest rug-pulling. McQuarrie's success lies in the fact he still makes you bite your nails. Even better, you don't facepalm at the resolutions involving all the fancy tech. McQuarrie manages to convince you of the consistency of the film's logic. You take the MI world for what it is.

And making it all doubly satisfying is the leading man. Tom Cruise, at 53, is easily among the best action stars out there (if not the best). He's performed all his stunts himself, lending a sense of reality to the almost other-worldly action setpieces. He is less cocky here, but as charming as ever. The frame where he chases on a superbike wearing goggles and a floral shirt is pretty much the definition of coolth.

But the person who practically steals Cruise's thunder is Rebecca Fergusson, playing the deadly agent Isla Faust. A good actor who also happens to be able to kick serious butt while looking positively divine, she is thankfully not at all sexualised despite all the times the camera lingers on her.

The rest of the cast are very talented, too, but they don't quite get the opportunity to show it. Except, perhaps, Simon Pegg as the loyal and reliable Benji Dunn. Jeremy Renner, Ving Rhames and Alec Baldwin are all good and make best of their short screentimes. The antagonist Solomon Lane (Sean Harris) carries an eerieness about him, but the underplaying is a bit much. He doesn't register as particularly intimidating.

The background score (Joe Kramer) is replete with strains of the MI theme (originally composed by Lalo Schifrin) now etched into most playlists, and it is as exciting as ever. The cinematographer (Robert Elswit) makes great use of the sprawling landscapes of the locations (London, Vienna, Paris, and Casablanca in Morocco), and the editing (by Eddie Hamilton) brings out the wonderful pace that McQuarrie aims for.

MI: Rogue Nation takes off even before the movie begins (the IMAX countdown comes with an MI theme). And when it does begin, you might want to wear your seat belts. Particularly when you watch Agent Ethan Hunt clinging on to the outside of a plane. It's the sort of film where you don't have time to think about whether things are making sense.
Share. Save. Connect.
Tweet
MISSION IMPOSSIBLE - ROGUE... SNAPSHOT
MISSION IMPOSSIBLE - ROGUE NATION SNAPSHOT 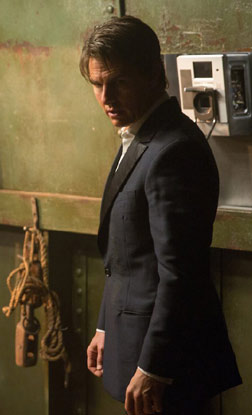 ADVERTISEMENT
This page was tagged for
Mission Impossible - Rogue Nation english movie
Mission Impossible - Rogue Nation reviews
release date
Tom Cruise, Rebecca Ferguson
theatres list
Follow @fullhyderabad
Follow fullhyd.com on
About Hyderabad
The Hyderabad Community
Improve fullhyd.com
More
Our Other Local Guides
Our other sites
© Copyright 1999-2009 LRR Technologies (Hyderabad), Pvt Ltd. All rights reserved. fullhyd, fullhyderabad, Welcome To The Neighbourhood are trademarks of LRR Technologies (Hyderabad) Pvt Ltd. The textual, graphic, audio and audiovisual material in this site is protected by copyright law. You may not copy, distribute, or use this material except as necessary for your personal, non-commercial use. Any trademarks are the properties of their respective owners. More on Hyderabad, India. Jobs in Hyderabad.