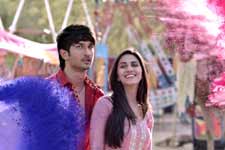 Neha Mathur / fullhyd.com
EDITOR RATING
7.0
Performances
Script
Music/Soundtrack
Visuals
7.0
6.0
7.0
7.0
Suggestions
Can watch again
Yes
Good for kids
No
Good for dates
Yes
Wait to rent it
No
If you will not abstain and you dare not commit, then voila, you are a card-carrying member of the Shuddh Desi Romance Youth Club. Any doubts? There, there, right there you have it. Maneesh Sharma's mint-fresh take on modern love highlights the dilemmas and doubts that hassle the ever-evolving Indian youth caught between enduring social customs and new capricious fantasies.

Tourist guide Raghu (Sushant Singh Rajput) bluffs ditsy foreign travellers, poses as a baraati in random weddings for Goel's/Tauji's (Rishi Kapoor) catering agency, and falls in love at the drop of a hat. In his spare time, he also plays the runaway groom, leaving his beautiful wife-to-be-not, Tara (Vaani Kapoor), at the altar.

Picking instant attraction over arranged marriage, our playful and naive Jaipur-ka-hero chases, wins over and lives-in with seasoned lover girl Gayatri (Parineeti Chopra), a teacher at a local English-coaching institute. And all this over a cup of coffee and gulab jamun!

Jaideep Sahni's screenplay sprints bravely between Raghu / his two ladyloves, a handful of weddings (gone wrong), and untimely breaks to the bathroom. Yes, you read correctly. Bathroom breaks. Believe it or not, it remains an amusing scamper with all of this, and sometimes, despite all of it.

With Shuddh Desi Romance, Bollywood's new romances successfully graduate from the stale moralizing of Salaam Namaste and the glossy predictability of Love Aaj Kal. This is not a trendy depiction of live-in relationships, and nor does it sermonize. It provides a day-to-day, mundane portrayal of youngsters trying to manoeuvre through love, lust and life.

The film remains lighthearted throughout, and does not resort to sentimentality at any dramatic juncture. On the contrary, the scarce emotional scenes are understated and lifelike. Parineeti Chopra does a great job of keeping the glycerine and melodrama under check.

Equally, both female characters never lose their spunk, unlike Maneesh Sharma's earlier heroines in Band, Baaja, Baraat and Ladies vs Ricky Bahl, who were diluted into insipid, lovelorn damsels by the second half of the films.

Though the overall dialogue and lively one-liners keep the film buoyant, one cannot ignore the fact that the script dawdles from time to time. If only Jaideep Sahni had scratched the surface a little further, and toiled harder in his delineation of the trio. The temperate tone of the film is a double-edged sword. While it entertains, it also leaves certain plot points hazy.

Also, while the film's candour and ease are refreshing, the breezy characters seem half-sketched. It is as if the protagonists wanted to say more but did not. There are moments when Tara's motivations lack credibility even though she is etched out to be one cool dame (which she is).

Similarly, while the verbal chemistry between Raghu and Gayatri is charming, the kisses seem a bit awkward. Some might even feel that the depicted relationships lack passion. Fortunately, the tracks Tere Mere Beech Main and Gulabi Shaam infuse great warmth and spirit into the script.

The cinematography blends in seamlessly with the intent of the director - to create a realistic backdrop, which narrates a believable love story. Thankfully, Rajasthan is not glossed over with saturated colours. A special mention must go to the production design. Be it the visual-feel of the small-town weddings with tacky lighting or Gayatri's cluttered one-room quarter, the sets are bang on.

Parineeti Chopra and Sushant Rajput Singh are a delight to watch. Their brawls and their making-up are irresistible. Parineeti excels as a sensible young woman in control of her life, while Sushant is winsome as the lost boy with rose-tinted glasses on.

Rishi Kapoor, as the vacillating hero's confidante and as impatient spectator standing in for the absent/disapproving families, is a treat. Vaani Kapoor essays her role with adequate ease.

Despite the loopholes in the script Shuddh Desi Romance is worth a watch. It is witty, it is mild. More than anything else, it is fresh.
Share. Save. Connect.
Tweet
SHUDDH DESI ROMANCE SNAPSHOT 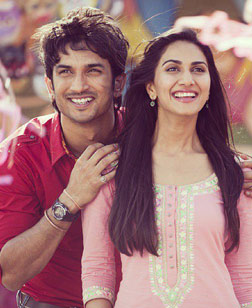