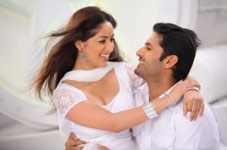 Ravi Kandala / fullhyd.com
EDITOR RATING
3.0
Performances
Script
Music/Soundtrack
Visuals
7.0
3.0
3.0
4.0
Suggestions
Can watch again
No
Good for kids
No
Good for dates
No
Wait to rent it
No
It was not until we started reviewing movies that we started looking at the censor certificates of movies with extra care to check the runtimes. Last week, we saw that Hora Hori was 164 minutes long - half an hour into the film, we were dreading the remaining 134 minutes. Today, we walked into Courier Boy Kalyan and saw that the movie was just 104 minutes long - twenty minutes into the film, the second song began, and we knew the next 80 minutes weren't going away soon.

Courier Boy Kalyan has an interesting premise. A courier delivery guy goes to deliver a package to a social activist. He sees the activist being attacked for the package, takes it and runs away. He calls the guy who sent the parcel and finds out that he is dead. He then goes to the police and is in a police jeep with an inspector when the jeep is hit and he is dragged away along with the parcel. What does that parcel contain? Who is so desperate to get hold of it? Does the courier boy manage to deliver it to the right hands?

The premise sure sounds interesting. Unfortunately, this entire premise plays out in the last 20 minutes of CBK. The first half has a love story which goes like this - an unemployed young man goes to deliver a courier on behalf of a friend to a store, sees a girl there, falls in love with her, and gets a job in the courier office so he can keep meeting the girl. When the girl gets no further couriers, he starts sending them himself so he can meet the girl daily. He sings a song the first time he sees the girl. He sings another song in the next five minutes when the girl tells him that the shirt he's wearing is nice, and sings another in a pub when he parties with his brother-in-law after finding out his sister is pregnant. All this sends you on edge, and only then does the actual plot begin.

And therein lies the problem with the film. By the time the interesting part of CBK begins, you have kind of switched off from the movie. The first two songs are about five minutes apart, and the pub song is totally out of place. The comedy track also appears forced - both its placement and the laughs it generates. And the movie is supposed to be a thriller, but the thrills are few and far in between, and barely work.

Nitin does well and attempts to look the part, but his dressing gives him away. He acts decently, though. Yami Gautam is barely there but for the songs. There is also a song which says she's looking bright as Ujala white and how after seeing her even darkness turned white - we wonder if it is a nod to her Fair & Lovely commercials. Ashutosh Rana barely has a role except for a couple of scenes where he's bashing up someone with a rod. The remaining support cast do a decent job of what they are asked to do.

The technical values are sketchy. The music is passable, but the placement of the songs makes them unbearable.

Courier Boy Kalyan, originally announced in 2012, has about the same utility as a courier package delayed by 3 years. Whatever entertainment this has to offer, you probably already got long back. And if you paused to think if that sentence made sense, it's still a better use of your time.
Share. Save. Connect.
Tweet
COURIER BOY KALYAN SNAPSHOT 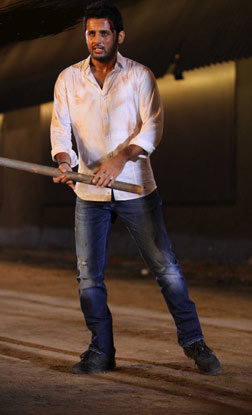 ADVERTISEMENT
This page was tagged for
Telugu.coreyer boy Kalyan. movie. mp3
Courier Boy Kalyan telugu movie
Courier Boy Kalyan reviews
release date
Nithin Kumar Reddy, Yami Gautam
Follow @fullhyderabad
Follow fullhyd.com on
About Hyderabad
The Hyderabad Community
Improve fullhyd.com
More
Our Other Local Guides
Our other sites
© Copyright 1999-2009 LRR Technologies (Hyderabad), Pvt Ltd. All rights reserved. fullhyd, fullhyderabad, Welcome To The Neighbourhood are trademarks of LRR Technologies (Hyderabad) Pvt Ltd. The textual, graphic, audio and audiovisual material in this site is protected by copyright law. You may not copy, distribute, or use this material except as necessary for your personal, non-commercial use. Any trademarks are the properties of their respective owners. More on Hyderabad, India. Jobs in Hyderabad.