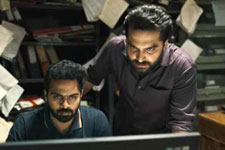 Neema Pramod / fullhyd.com
EDITOR RATING
7.5
Performances
Script
Music/Soundtrack
Visuals
7.5
7.5
7.5
7.0
Suggestions
Can watch again
Yes
Good for kids
No
Good for dates
No
Wait for OTT
No
A thriller is a tricky genre to master. To make an effective thriller, a filmmaker should have good control over his craft, an airtight script that does not leave room for much loopholes, and a strong technical team that can translate his vision on-screen. And of course, a strong cast that can make you believe in the motivations of the characters.

Very rarely does a thriller manage to have all these elements fall into a place. And in Telugu cinema, where a pure thriller itself is as rare a sight as a raindrop in a desert, well-made thrillers are extremely difficult to come by. So understandably, we did enter the theatre with some sense of trepidation. However, we are glad to report that HIT is indeed the equivalent of a torrent of rain in a dry, parched desert.

HIT is an acronym for Homicide Intervention Team. And our hero Vikram (Vishwak Sen) is one of the most intelligent and dedicated officers in the team. However, he also suffers from Post Traumatic Stress Disorder (PTSD) due to his traumatic past, resulting in frequent panic attacks while on duty. The sight of fire is his primary trigger. Vikram, however, is determined to not let his condition come in the way of his passion - his job.

After much persuasion from his girlfriend Neha (Ruhani Sharma) and his psychologist, Vikram reluctantly decides to take a sabbatical from work. However, a mysterious case of two missing women, of whom one is Neha herself, forces him back into action. And as the case progresses, Vikram realizes that in order to hunt down the mystery kidnapper, he would have to battle his own demons first.

There are many things to like about HIT. One is, of course, the plot. The film manages to keep you on the edge of your seat throughout its runtime with its unpredictability. But what makes HIT work so well is how it does not undermine the audiences' intelligence. Sailesh Kolanu does not believe in spoon-feeding. He drops just enough breadcrumbs along the way, and trusts you to be able to map out the trail without much of hand-holding.

The detailing is a joy. How many times have we seen how DNA and fingerprint samples are actually taken from suspects? How many times have we seen the polygraph test and narco test being administered to a suspect along with the ethical procedures that have to be followed before doing the same? It is always a delight when you learn something new from a movie, and HIT is one film which gives you that pleasure.

Another remarkable aspect about the movie is its quiet progressiveness, without the use of any explicit messaging. There is a scene where a college professor talks about how girls wearing jeans and roaming around with boys are destroying "culture". Not only does the film not side with this man, but it also doesn't make this scene an excuse for the hero to launch into a lecture about respecting women. Instead, Vikram responds with a one-liner that makes you laugh out loud as well as applaud it for the point it manages to make.

One of the girls who go missing is one who goes out and parties in pubs nearly every day, but not once does the film blame her lifestyle for her disappearance. It is also refreshing to see women driving in a film. However, what really stood out for me was a scene which is so subtle that you would miss it if you blinked. Vikram and his colleague Rohith (Chaitanya Sagiraju) are trailing a potential suspect in a pub when they accidentally bump into two men almost kissing. The couple spot him and move away, while Vikram and Rohith continue on their pursuit. There is no reason to have a gay couple there - it could have been a man and a woman, and it wouldn't have changed a thing.

With HIT, Vishwak Sen has landed quite a meaty role, and he bites into it with relish. His Vikram is a character who constantly lets his emotions get in the way of his duty - especially since the case at hand is very personal - and Sen captures his struggle beautifully. As the case intensifies, we see Vikram get more and more agitated, with the stress of his battle with PTSD adding on to the already tense case. Sen's performance ensures that some of this agitation and tension rubs off on us as well - we too are filled with a sense of urgency. His dialogue delivery is a huge plus - his voice modulation can really elevate a line.

The actors surrounding him are wonderful as well - be it the experienced ones like Murali Sharma, Brahmaji and Bhanu Chander, or the relatively newer faces like Chaitanya Sagiraju and Ruhani Sharma, they are all apt in their roles. The cinematography by S Manikandan is also very effective, but it is Vivek Sagar's outstanding background score that truly sets the mood of the film.

If I had to nitpick, I would say I wished that Ruhani Sharma, who made a promising debut last year with Chi La Sow, was given more to do. Her character's flashback portions with Vikram are perhaps the only speed-breakers in the movie, but these scenes do give you a background to their relationship, and are over before you really get a chance to complain. However, I do wish the motive of the kidnapper had been stronger. Not that it is bad or implausible - it's just that it seems weaker in comparison with the rest of the film.

But these are just minor quibbles in what is an otherwise wonderfully gripping thriller. With no songs and no punchlines, a vulnerable hero and very few fight sequences, this might not work for everyone. However, if you are the kind who loves a good thriller (and have the stomach to handle a little bit of gore), this could be just what the doctor ordered.
Share. Save. Connect.
Tweet
HIT SNAPSHOT 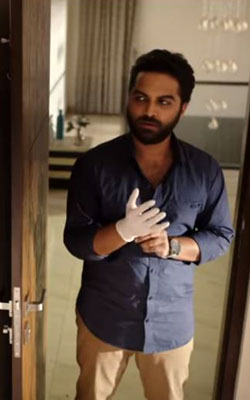 See HIT full details
HIT USER REVIEWS
1 - 1 OF 1 COMMENTS
POSITIVE  |  NEGATIVE |  NEWEST  |  OLDEST  |  MOST HELPFUL  |  LEAST HELPFUL
Kanye on 4th Apr 2020, 9:37am | Permalink
Just happened to watch this movie. I was thoroughly impressed with the progressive nature of the film (the gay couple, the handling of the investigation, etc.) without ever giving off the vibe that they were deliberately trying to be progressive that we typically see in many movies nowadays.

My only issues with the movie is that there were a few editing hiccups in the first half and the culprit of the whole thing seemed a bit farfetched and personally, was kind of a letdown even though it was shocking.

I really like that the new kid Vishwak Sen picked up this movie and is definitely a step in the right direction post the extremely mediocre Falaknama Das.

ADVERTISEMENT
This page was tagged for
hit telugu movie review
telugu movie hit plot
HIT telugu movie
HIT reviews
release date
Follow @fullhyderabad
Follow fullhyd.com on
About Hyderabad
The Hyderabad Community
Improve fullhyd.com
More
Our Other Local Guides
Our other sites
© Copyright 1999-2009 LRR Technologies (Hyderabad), Pvt Ltd. All rights reserved. fullhyd, fullhyderabad, Welcome To The Neighbourhood are trademarks of LRR Technologies (Hyderabad) Pvt Ltd. The textual, graphic, audio and audiovisual material in this site is protected by copyright law. You may not copy, distribute, or use this material except as necessary for your personal, non-commercial use. Any trademarks are the properties of their respective owners. More on Hyderabad, India. Jobs in Hyderabad.