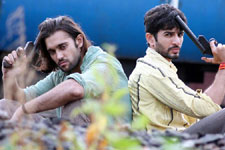 Kritika Deval / fullhyd.com
EDITOR RATING
3.0
Performances
Script
Music/Soundtrack
Visuals
4.5
2.0
3.0
5.0
Suggestions
Can watch again
No
Good for kids
No
Good for dates
No
Wait for OTT
No
A movie about two young partners-in-crime who choose different paths in life is a good idea. No. It is a great idea. Only, it is also one that apparently can be executed only via a thorough deluge on your senses that will leave you as disoriented as dissatisfied.

Let's begin with a gander at the story. Gyani (Jay Bhanushali) and Pali (Akhil Kumar) are young boys living the dream, i. e. making desi guns with the intention of surpassing the ideal role model for young boys in those parts, top gun Judge Sahab (Ashutosh Rana). Those parts, it seems, are in the hinterlands of UP, and apparently the go-to place for amateur sharpshooters to train for the Olympics - at least in the mind of Major Suryakant Rathore (Sunil Shetty). However, just when Gyani and Pali are about to change their lives for the better, Judge Sahab dangles the more glittery carrot of invincible power and immeasurable wealth.

Do they go for it? Or do they leave behind their sordid ways to seek glory for our great nation? Who really cares as long as the noise just friggin' stops?

We get that most movies do not portray gunshots realistically, in that hearing a gunshot without ear protection can render you temporarily or permanently deaf. We just assumed that most filmmakers are sane people who realize that severely impairing the hearing of every new batch of audiences might not be the best of business models.

Also, our concise and attractive writing style may lull you into thinking that the plot is quite simple. Do not be fooled. Not only are our two young "hotheads" thoroughly bad at expressing anything that they are supposed but be, but also you have Sunil Shetty overcompensating, which is something that anybody born before 1993 knows is a really bad idea. And, this is before we mentioned the dialogues. How either of the "hotheads" restrained themselves from sending a bullet through Shetty's head upon being asked to shoot in the time spanned by two heartbeats would have been shocking if the boys looked a bit less like mannequins.

Pali and Gyani, who start their sharpshooting careers by shooting someone who wanted them to study and have better lives, BTW, also have girlfriends - Guddi (Tia Bajpai) and Paridhi (Sasha Agha). While Guddi is a childhood obsession of Pali's, in that Pali was a boy and Guddi was a young woman who miraculously stayed a young woman even when Pali grew up, Paridhi seems to exist solely as a futile attempt at political correctness in a film whose very existence is metaphorical phallic-swinging.

For a movie that is supposed to be a highly charged action thriller, those involved seem remarkably disinterested in the events surrounding them, which, again, might technically be realistic considering how used to crime Bollywood thinks UP is, except, of course, for Ashutosh Rana, who is the only ray of depraved but bright life in a film that is otherwise rather sludge-like in consistency.

The editing and the camera-work are as randomly pointless as absolutely everything in the movie, and you should keep a list of the runtime of every song so you can skip them to the second in case you have some sinister or suicidal reason to watch the film in its entirety.

If this review is not enough to convince you that no good will come from watching this poor excuse for filmmaking, ask yourself one last question: Do you like your ears?
Share. Save. Connect.
Tweet
DESI KATTEY SNAPSHOT 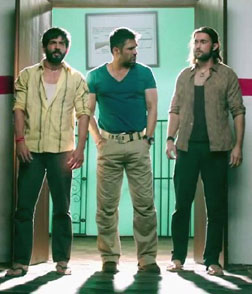 ADVERTISEMENT
This page was tagged for
Desi Kattey hindi movie
Desi Kattey reviews
release date
Sunil Shetty, Jay Bhanushali
theatres list
Follow @fullhyderabad
Follow fullhyd.com on
About Hyderabad
The Hyderabad Community
Improve fullhyd.com
More
Our Other Local Guides
Our other sites
© Copyright 1999-2009 LRR Technologies (Hyderabad), Pvt Ltd. All rights reserved. fullhyd, fullhyderabad, Welcome To The Neighbourhood are trademarks of LRR Technologies (Hyderabad) Pvt Ltd. The textual, graphic, audio and audiovisual material in this site is protected by copyright law. You may not copy, distribute, or use this material except as necessary for your personal, non-commercial use. Any trademarks are the properties of their respective owners. More on Hyderabad, India. Jobs in Hyderabad.