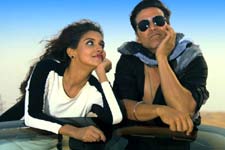 Kritika Deval / fullhyd.com
EDITOR RATING
5.0
Performances
Script
Music/Soundtrack
Visuals
6.0
6.0
5.0
5.0
Suggestions
Can watch again
No
Good for kids
Yes
Good for dates
No
Wait to rent it
Yes
The bovine nature of Bollywood's "comedy" genre should've ceased to astonish long past now, but somehow doesn't. And Khiladi 786 is a perfect example for cinema that has been ruminated so many times over that even something unicellular can't find nutrition in all that's left of the grub.

That is not to say that Khiladi 786 is particularly bad - it is just astoundingly unoriginal. And all the things that are salvageable in this leftover-food-fest have been damned to mediocrity by the sin of overdoing.

Let us start with the story. It begins, not (as you would expect) with the hero beating a bunch of random people to a pulp, but with a Gujarati wedding-planner's son who has messed up yet another wedding his father went to great pains to arrange (probably the only bit of ingenuity you'll find here). The son, Mansukh Desai (Himmesh Reshammiya), gets kicked out of his home and lands himself in yet another mess. Only, this one could end up costing him his life.

Tantiya Tukaram Tendulkar a.k.a TT (Mithun Chakraborty), a world-famous-in-akkha-Mumbai don wants to see his sister Indu (Asin) married into a respectable family, in under ten days. And the only person Mansukh thinks is suitable for that bigdi ghodi is 72 Singh (Akshay Kumar), Punjab-da-puttar extraordinaire, son of 70 Singh, nephew of 71 Singh, brother of 73 Singh who they lost at some mela or the other when he was young.

So, before we get caught in the fascinating Singh family tree, back to the story. Mansukh makes TT pretend to be a cop so they can finally land a "respectable" groom for the gunda's sister. What they don't know is that the 70+n (where n = 0, 1, 2, 3....) family is one of smugglers pretending to be cops for the exact same reason.

As Indu says one time too many, gunde ki behen ko gunde se hi shaadi karni chahiye. But who's to tell that to the senior gundas?

This forms the premise of the comedy-of-errors that comes from the mill where all original ideas go to die.

The only thing that makes it watchable is the supporting cast, that includes Mithun Chakraborty, Paresh Rawal, Raj Babbar, Rajesh Khattar and Johny Lever, who draw genuine chuckles despite the inanity of what comes out of their mouths.

Akshay Kumar is as much of a cardboard-gone-overboard as ever. Asin tries hard to play the tough-as-nails Mumbai chi mulgi, but has too much of a nice-girl vibe to pull it off.

The cinematography is bright and colorful, as befitting the provenance of the characters. The music is sure to stick around in pubs frequented by striplings for quite a while.

All in all, Khiladi 786 is for when you have absolutely nothing to do and no one to do it with (nothing, that is). For all the other times, you have life waiting for you.
Share. Save. Connect.
Tweet
KHILADI 786 SNAPSHOT 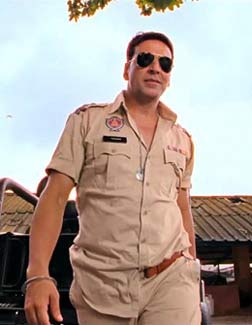 ADVERTISEMENT
This page was tagged for
Khiladi 786 hindi movie
Khiladi 786 reviews
release date
Akshay Kumar, Asin
theatres list
Follow @fullhyderabad
Follow fullhyd.com on
About Hyderabad
The Hyderabad Community
Improve fullhyd.com
More
Our Other Local Guides
Our other sites
© Copyright 1999-2009 LRR Technologies (Hyderabad), Pvt Ltd. All rights reserved. fullhyd, fullhyderabad, Welcome To The Neighbourhood are trademarks of LRR Technologies (Hyderabad) Pvt Ltd. The textual, graphic, audio and audiovisual material in this site is protected by copyright law. You may not copy, distribute, or use this material except as necessary for your personal, non-commercial use. Any trademarks are the properties of their respective owners. More on Hyderabad, India. Jobs in Hyderabad.