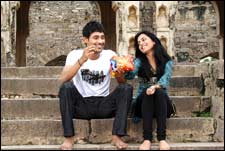 Deepa Garimella / fullhyd.com
EDITOR RATING
2.5
Performances
Script
Music/Soundtrack
Visuals
4.0
2.0
4.0
3.0
Suggestions
Can watch again
No
Good for kids
No
Good for dates
No
Wait for OTT
No
Yemaindi Ee Vela is a sincere effort to hold a mirror to present-day society, asking some hard-hitting questions about youth and their value systems. Unfortunately, the makers of this movie weren't aware of that when they made it, so it is basically a movie after which you hold a mirror to yourself asking yourself several hard-hitting questions and then hitting yourself real hard.

The film opens with Seenu (Varun Sandesh) and Avantika (Nisha Agarwal) getting ready to get hitched for a second time. They each start explaining to their respective partners what went wrong in their earlier marriage. The two then start bad-mouthing their ex-es, and what results is the rest of the film.

Cut to flashback. Avantika is this demure and innocent Bapatla girl who comes to Hyderabad for a job and lives in a hostel in Ameerpet. In women's hostels in Ameerpet, we are told, it is common for girls to discuss sex, hang out with boyfriends till late into dawn, have sleepovers at boyfriends' places, and so on. Avantika is suitably scandalized by everything: you understand this from the fact that she maintains the same expression throughout the movie.

But as things turn out, Avantika and Seenu, who is an ultra-cool dude who has also come to Hyderabad for a job, fall in love. They start chatting on phone till late into the nights, and even getting cozy in Internet cafes. Now Avantika's wants to be a traditional conservative girl, but finds it hard to stay so. Especially since Seenu has now invited her to his flat to sleep with her. And especially since she has already accepted the invitation and shed all her clothes.

Anyway, the two get married soon after, opposing their families. However, the marriage is a flop because Seenu bad-mouths Avantika, because Avantika is too picky, and mainly because both of them outdo each other in dumbness. We're backing Seenu in the lowest-IQ race, since the difference between his IQ and the minimum accepted level for primates is several points.

Having explained their sex life in great detail to their new prospective partners, and having suitably freaked them out, Seenu and Avantika now start wanting to get back in touch. In the end the two new couples reach the registrar's office but don't get married since our first pair of love-birds has decided to renew things and give each other and all of us a fresh chance at life.

Yemaindi Ee Vela doesn't rise above being the seedy, second-rate offering that it is. Like several of these kinds of movies, it showcases youngsters as being sleazy in general, and also takes incorrect moral stand-points, for e.g., it says that lonely girls in the city are trapped by men desperate for sex. Why on earth does Seenu have to be accused of luring Avantika into sleeping with him when the whole episode was consensual?

It's a wonder how Kajal Aggarwal let her sister star in this one, but it's no wonder that Varun Sandesh's career is rolling down faster than you can blink. Nisha Aggarwal is pretty stony-faced, but maybe you can excuse her since this is her debut. Varun Sandesh, however, continues to be bad at acting and at his choice of films.
Vennela Kishore has some of his trademark comedy, though it's dull. Jhansi overacts in a sham of a role as Avantika's aunt, while Pragati, who plays Seenu's mother, has some of the more sensible lines in the film. The music is strictly for the ears of those who composed it.

ADVERTISEMENT
This page was tagged for
yemaindhi ee vela full movie
evela emaindi movie sex details
emndi eevela movie review in telugu
Yemaindi Ee Vela telugu movie
Yemaindi Ee Vela reviews
Follow @fullhyderabad
Follow fullhyd.com on
About Hyderabad
The Hyderabad Community
Improve fullhyd.com
More
Our Other Local Guides
Our other sites
© Copyright 1999-2009 LRR Technologies (Hyderabad), Pvt Ltd. All rights reserved. fullhyd, fullhyderabad, Welcome To The Neighbourhood are trademarks of LRR Technologies (Hyderabad) Pvt Ltd. The textual, graphic, audio and audiovisual material in this site is protected by copyright law. You may not copy, distribute, or use this material except as necessary for your personal, non-commercial use. Any trademarks are the properties of their respective owners. More on Hyderabad, India. Jobs in Hyderabad.