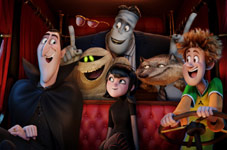 Zehra Abbas / fullhyd.com
EDITOR RATING
5.0
Performances
Script
Music/Soundtrack
Visuals
6.0
4.0
5.0
5.0
Suggestions
Can watch again
No
Good for kids
Yes
Good for dates
Yes
Wait for OTT
Yes
Drac is back, and things are getting batty. In 2012's Hotel Transylvania, our favourite blood-sucking vampire learned to suck it up, and accepted the human boyfriend of his daughter Mavis (Selena Gomez), Johnny (Andy Samberg). Hotel Transylvania 2 opens with Count Dracula (Adam Sandler) getting his "little poison berry" married to Johnny. Will wonders never cease? Apparently not in Transylvania, because a year later there's a bun in the oven, and Drac is ecstatic.

He seems ready for his half-human, half-vampire grandbaby because Drac has truly come a long way. He has developed a grudging affection for his goofy son-in-law, opened up the hotel to humans, and is even attempting to become tech-friendly, though he describes video-chatting as "all the phones and the buttons and the agony".

Come Friday the 13th, and out pops Dennis (Asher Blinkoff) with blue eyes and ginger curls, and a significantly high cuteness quotient. Drac turns overnight into a doting grandpa, and even sings Dennis to sleep with his own versions of classic lullabies like Twinkle, Twinkle Little Star:

"Suffer, suffer, scream in pain,
You will never breathe again"

There's just one catch - Drac has his beady eyes firmly fixed on little Dennis' toothless gums in anticipation of two perfect little ivory fangs. If the boy doesn't sprout fangs by his fifth birthday, then that would mean that he was purely human, and had rejected his mother's genes. Like all good (read overbearing) grandparents, Drac has perfect faith in the ascendancy of his vampire genes, and the over-zealous Vampa (vampire + grandpa, do the math) decides to take Dennis on a road trip to showcase the monster lifestyle, and tease those fangs out of hiding.

Count Dracula is accompanied by his coterie, which includes Frankenstein (Kevin James), Murray The Mummy (Keegan Michael-Key), Wayne The Werewolf (Steve Buscemi), and the Invisible Man Griffin (David Spade). Yes, the road trip is the animated, PG-friendly version of Grown Ups, that 2010 Sandler film that made us all cringe. It's almost the same trope - a bunch of middle-aged guys revisiting their old haunts, and realizing that the world they remembered so fondly is gone. Count Dracula is a believer in tough love, and is horrified by the new age mollycoddling of little vampires at his old vampire camp. Unlike Drac, the others are more accepting of the change, with Frankenstein even posing for a selfie with human "fans". The road trip ends in disaster, but Vampa and Dennis still get their happy ending.

The script by Sandler and Robert Smigel doesn't aspire to greatness. The humour of the film is often corny, and relies heavily on obvious puns and gags. Sample this - Johnny advises Dracula to use Bluetooth, and the latter says that he already does, and calls over a giant, blue-coloured tooth. But director Genndy Tartakovsky has done a smart job with the pace of the movie, and the jokes come so thick and fast that they lull you into acceptance.

Sandler's typical hamming surprisingly lends itself well to this genre, though his version of a Romanian accent is pretty unforgivable. Since he monopolises the action, his sidekicks aren't nearly as funny as they could have been, and that holds true even for Count Vlad, voiced by the legendary Mel Brooks. Vlad is Dracula's severely misanthropic and oh-so-old-school father, and the character was rich for some cracking lines, but the lack of truly clever writing disappoints yet again.

This contentment with mediocrity is obvious even in the SFX. The visuals are as good as those of any big studio animation flick, but the 3D is average at best and no reason to get your cloak in a flap. You'd think Sony Pictures would have tried harder, what with all the shameless product placement. Also, considering the way in which recent animation features are pushing the envelope, like the fantastic How To Train Your Dragon films, Hotel Transylvania's lack of ambition is equal parts disappointing and surprising.

The creators also make a half-hearted attempt at leaving the viewers with a "moral of the story" as is de rigueur with such films. Look at the clay they were playing with - identity, tolerance and the power of love. Promising material, right? For much of the movie, it seems like they're going to get it right, but the rushed handling of the central problem leaves you feeling cheated.

Unlike today's typical animation features that appeal to both adults and children, Hotel Transylvania 2 is essentially a goofy film that caters best to children. If you have young kids, this is fun weekend fare for them. If you don't, book yourself a room at a real hotel instead.
Share. Save. Connect.
Tweet
HOTEL TRANSYLVANIA 2 (3D) SNAPSHOT 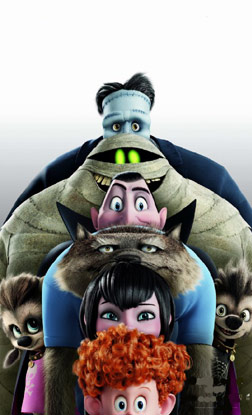 ADVERTISEMENT
This page was tagged for
Hotel Transylvania 2 (3D) english movie
Hotel Transylvania 2 (3D) reviews
release date
Adam Sandler, Andy Samberg
theatres list
Follow @fullhyderabad
Follow fullhyd.com on
About Hyderabad
The Hyderabad Community
Improve fullhyd.com
More
Our Other Local Guides
Our other sites
© Copyright 1999-2009 LRR Technologies (Hyderabad), Pvt Ltd. All rights reserved. fullhyd, fullhyderabad, Welcome To The Neighbourhood are trademarks of LRR Technologies (Hyderabad) Pvt Ltd. The textual, graphic, audio and audiovisual material in this site is protected by copyright law. You may not copy, distribute, or use this material except as necessary for your personal, non-commercial use. Any trademarks are the properties of their respective owners. More on Hyderabad, India. Jobs in Hyderabad.